As microvascular breast reconstruction and tamoxifen are both independent risk factors for thromboembolic events, it is possible that continuing tamoxifen therapy at the time of surgery may compound this risk. In addition, due to the pro-thrombotic effect tamoxifen has on the systemic circulation, it is possible that it could also impact on the microcirculation at the time of microvascular reconstruction. Therefore, this study aimed to assess if tamoxifen has implications for microvascular thrombosis and secondary thromboembolic events by performing a systematic review and meta-analysis of the literature to guide its use in the perioperative period. We present the following article in accordance with the PRISMA reporting checklist (10) (available at http://dx.doi.org/10.21037/abs-20-57).

A search of the published literature was performed using the following terms: (“tamoxifen” OR “hormonal therapy” OR “anti-oestrogen” OR “anti-estrogen” OR “selective oestrogen receptor modulator” OR “selective estrogen receptor modulator”) AND (“flap” OR “free tissue”). The following databases were searched, from 1990 until March 2020: Cochrane Library and Central Register of Controlled Trials, PubMed, Science Direct, Embase, Web of Science, Cumulative Index to Nursing and Allied Health (CINAHL) and grey literature databases (including clinicatltrials.gov and http://isrctn.org). Only studies published in the English language were included. The references of all included studies were assessed to identify any other relevant studies. All searches were completed in March 2020. Relevant article titles were then exported to EndNote reference software.

Two reviewers (SMB and JFCW) independently screened the titles and abstracts of all studies identified in the search strategy for inclusion. Duplicate articles were deleted. Further assessment of studies identified that potentially met the inclusion criteria then underwent review of the full text article. Articles that were not clearly excluded based on abstract review also underwent full text review. After review of the full text articles, the publications that were deemed relevant were analysed. Articles that reported the outcome on tamoxifen and its impact on microsurgical anastomosis outcomes were included in the study. For inclusion in the systematic review and meta-analysis, the minimum outcome dataset in the publication had to include the number of patients on and off tamoxifen and the incidence of free flap related complications including the number of total flap failures between groups, the number of partial flap failures between groups and the incidence of arterial or venous compromise between those taking tamoxifen and those not on hormonal therapy. Exclusion criteria included the inability to access the publication’s full text. Studies were also excluded if the subjects were animal models or if there was no comparison made between those on tamoxifen and those not on tamoxifen therapy.

Data was collated and then subsequently assessed and analysed according to the guidelines in the Cochrane Handbook for Systematic Reviews of Interventions (11). Two reviewers (SMB and JFCW) independently analysed each study’s methodology, extracted relevant data and input the data into a customised Microsoft excel spreadsheet. Data that was extracted included the name of the first author, the year of publication, the country of publication, patient demographics, the number of patients included, the status of tamoxifen use, flap related and systemic complications. Potential confounding factors including the patient’s smoking status and exposure to pre-reconstruction radiotherapy were also recorded. Primary outcomes of the study were total or partial flap failure and the incidence of arterial or venous microvascular compromise. Secondary outcomes included the incidence of systemic thromboembolic complications.

Results were pooled using the software package RevMan 5.3 provided by the Cochrane Collaboration (The Nordic Cochrane Centre, Copenhagen, Denmark) (11). Cases where tamoxifen was continued in the perioperative period were compared with cases with perioperative tamoxifen cessation in patients undergoing microvascular breast reconstruction. The Mantel-Haenszel statistical methodology was employed to assess the primary and secondary endpoints. For dichotomous variables, the treatment effect was calculated using a fixed-effect model and reported as risk ratios (RR) with 95% confidence intervals (CI). This was calculated for each primary and secondary endpoint. Statistical heterogeneity was assessed using the Chi-squared test and the degree of heterogeneity was quantified using the I2 statistic. Significant heterogeneity was assumed if P<0.10 in the Chi-squared test.

The search of the literature initially identified 245 articles. These were screened according to title and abstract. Duplicate titles were removed. Further assessment of the article abstracts revealed ten potentially eligible studies. Based on review of the full text article or potentially eligible studies, five studies were deemed eligible to be included in the final meta-analysis (12-16). A flow-chart for the literature screening process and results is seen in Figure 1. 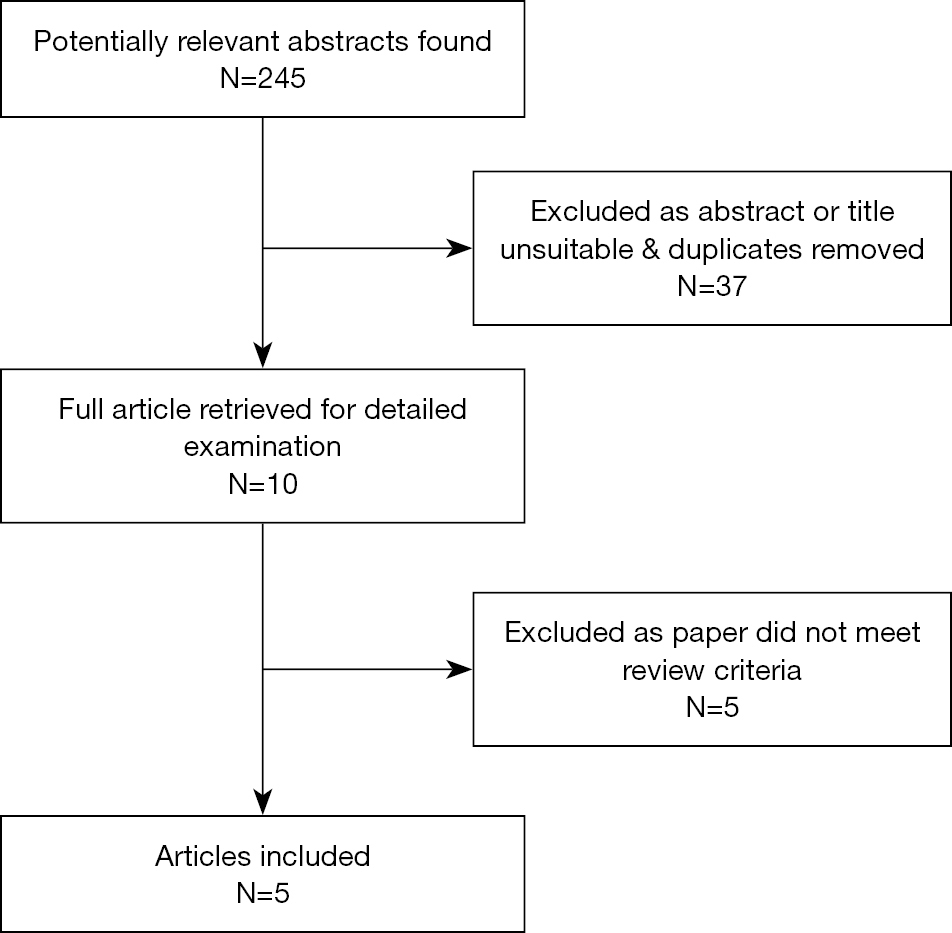 Details of included studies can be seen in Table 1. Four studies were conducted in USA and one study in France. All studies included were retrospective reviews, with level III evidence. There were no randomised controlled trials identified for inclusion in the study. Sample sizes included in the studies ranged from 78 to 779 patients. The articles assessed patients undergoing treatment between 1993 and 2015.

During breast reconstruction, a prolonged period of immobility is endured by the patient, with an associated increased incidence of DVT and pulmonary embolism formation. Asymptomatic DVT may be present a third of patients (19). The rate of pulmonary embolism may be as high as 20% (20). The risk of venous thromboembolism may be higher again in bilateral reconstructions (21). As a potentially lethal sequela, every effort should be made to minimise the risk of thrombosis and thromboembolism in the perioperative period.

When to stop tamoxifen?

There does not seem to be a consensus on whether tamoxifen therapy should be withheld for microvascular breast reconstruction. A survey of plastic surgery units in the UK found that 40% stopped tamoxifen in the perioperative period to reduce the risk of thromboembolism formation (23). The consensus on the duration of cessation varied greatly between the units from one week to six weeks prior to surgery and for one to four weeks after surgery. Tamoxifen has a therapeutic half-life of approximately seven days. Its metabolites, 4-hydroxy tamoxifen and 4-hydroxy N-desmethyl tamoxifen (endoxifen), have half-lives of approximately two weeks (24). Tamoxifen and its metabolites may be retained in tissues and the systemic circulation up to twenty-eight days at levels with sufficient potency. It can even be found in tumour tissue up to several months after cessation of treatment (25). Therefore, tamoxifen should be held at least four weeks preoperatively.

In the UK, guidelines from 2002 recommended the continuation of tamoxifen therapy prior to surgery unless the risk of tamoxifen related thrombosis outweighed the risk of interrupting breast cancer treatment (26). Since then however, there have been a multitude of studies published surrounding the increased risk of systemic thrombosis directly related to tamoxifen therapy. In the product monograph for tamoxifen published by the pharmaceutical company AstraZeneca, they state that its brand, under the trade name of Nolvadex, may increase the risk of complications after microvascular breast reconstruction (27). Microvascular thrombosis is listed in the document as a commonly occurring adverse drug reaction that is seen with tamoxifen, citing the study by Kelley et al. (16). The pharmaceutical company recommends temporarily stopping tamoxifen therapy before delayed microvascular breast reconstruction after assessing the benefits versus the risks of stopping therapy.

There is no clear evidence on when to restart tamoxifen in the postoperative period in the literature or on the product monograph. In addition, there are no studies to our knowledge looking at the implications of withholding tamoxifen for a short duration, or addressing how long it is safe the cease therapy without oncological implications in the breast cancer patient. It has been suggested that tamoxifen be restarted two weeks after surgery for the reason that whilst the majority of microvascular complications occur within the first three days after surgery, they can occur up to twelve days post-op (28). In addition, by this stage patients are generally mobilizing sufficiently to mitigate the risk of deep venous thrombosis or pulmonary embolism. We believe that this is a reasonable time to restart tamoxifen.

This study is a meta-analysis and systematic review based on the published literature looking at the effect that tamoxifen has on microvascular complications during free flap breast reconstruction. Few studies in the literature assessed this endpoint. A limited number of five studies that included a total of only 2,528 patients were identified for inclusion in the meta-analysis. One other relevant study was identified, however, the authors did not provide sufficient detail for inclusion in the meta-analysis. All studies were retrospective reviews. There was heterogeneity between the exact duration that defined active tamoxifen therapy between studies. The sample sizes were small in the studies included. The definition of active tamoxifen therapy differed between studies, with three studies including patients who were actively taking tamoxifen at the time of surgery, and one study including patients who had ceased therapy two weeks prior to surgery, however evidence suggests that tamoxifen may still be systemically active if consumed within four weeks prior to surgery. In addition, there was poor reporting of potential confounding factors for thrombosis such as smoking status and pre-reconstruction radiotherapy between groups and so a conclusion on the impact of covariates was not possible.

In this meta-analysis we found a slightly increased risk of total flap failure associated with tamoxifen use in the perioperative period. We also found a slightly increased risk of pulmonary embolism. Although these were small increased risks, and not statistically significant, there were limited numbers within the included studies, thus alerting to the possibility of a real risk associated with its use. We recommend stopping tamoxifen in the perioperative period to minimise the risk. Based on the current literature and the pharmacokinetics of tamoxifen, we recommend stopping tamoxifen therapy four weeks preoperatively. As the majority of microvascular complications occur within two weeks after reconstruction, we recommend withholding tamoxifen during this time and restarting it two weeks postoperatively.

Reporting Checklist: The authors have completed the PRISMA reporting checklist. Available at http://dx.doi.org/10.21037/abs-20-57

Conflicts of Interest: Both authors have completed the ICMJE uniform disclosure form (available at http://dx.doi.org/10.21037/abs-20-57). The authors have no conflicts of interest to declare.