A literature review was performed on PubMed using the keywords of omentum, omental, breast, and reconstruction. The included manuscripts were studies describing surgical technique in human subjects and written in the English language. The titles and abstracts were manually reviewed. Manuscripts discussing the use of the omentum for non-breast reconstruction or where their complete text was not available were excluded.

The greater omentum is typically the first structure encountered when entering the abdomen, covering the intra-abdominal organs. It arises from the greater curvature of the stomach, sometimes reaching the pelvis, and then folds on itself to enclose the transverse colon creating the gastrocolic ligament (2). On the right side, the attachments between the lesser curvature of the stomach and proximal duodenum to the liver create the gastrohepatic ligament, which is a part of the lesser omentum (2). On the left side, the greater omentum can extend from the fundus to the spleen forming the gastrosplenic ligament (3).

Prior and current uses of the omentum

Historically, the omentum has been known as the ‘policeman of the abdomen’ with biological functions in immune-regulation, neovascularization, hemostasis, and tissue regeneration (2,3). It is a richly vascularized tissue that can easily replicate the shape of irregular defects and is useful for infected or irradiated wounds. The first reported use was to decrease the risk of bowel complications by creating adhesions between the bowel and the omentum in the early 1800s (3). Since then, it has been used in a variety of specialties including neurosurgery, gynecology, colorectal, cardiothoracic, orthopedics, and plastic and reconstructive surgery.

Pedicled omental flaps have been more commonly used compared to free flaps as a pedicled flap can reach distant areas without the added complexity of a microvascular anastomosis. They are extensively used for coverage of tissue defects, treatment of infections, or to supplement suture lines such as a bronchial fistula or after pulmonary resection, sternal infections, or perineal closures after APR, respectively (4,5). A retrospective review over 25 years reported that the most common use of an omental flap by plastic surgeons was for the sternum and orbit/face followed by the chest wall and scalp (6). The more common use of the omentum in breast cancer patients has been for chest wall coverage in women with fungating masses (7-9).

As breast reconstruction has an increasing role after mastectomy, the use of the omentum has been reported but remains an uncommon reconstructive option. It has been predominantly used as a pedicled flap for partial or total autologous breast reconstruction (10-16). Use as a free omental flap is rarely done after total mastectomy with increased applications in patients undergoing breast conserving therapy (10,17-20). Because it can be difficult to predict the size of the omentum, its use has most commonly been used for small- to medium-sized breasts with the possible need to supplement a small-sized omentum with a latissimus dorsi flap or breast implant (15,18,21).

While the most common autologous option for breast reconstruction is abdominal tissue, not all women qualify or desire this approach. Women who have had a prior abdominoplasty, limited abdominal wall soft tissue, or prefer to minimize their risk of abdominal wall morbidity are ideal candidates for an autologous omental free flap. A major challenge to using the omentum in the past was the morbidity associated with a laparotomy. Since the early 2000s, however, laparoscopy has been more widely accepted for harvesting the omentum and is now the standard approach (22,23).

The current reservations in using the omentum is the difficulty in predicting its volume pre-operatively (10,17). Various imaging modalities (ultrasonography, computed-tomography, magnetic resonance imaging) have been inaccurate in estimating the volume of the omentum, and patient weight or body mass index is not predictive (3). A group from Japan reviewed 200 patient cases who underwent oncoplastic surgery with an omental flap for reconstruction (21). More than one-third of their patients who had a nipple- or skin-sparing mastectomy had volume insufficiency in using the omentum alone necessitating the use of the latissimus dorsi or a tissue expander.

For these reasons, the omental fat-augmented free flap (O-FAFF) provides a viable alternative option for autologous breast reconstruction in patients. We recently reported the outcomes for 3 patients who had undergone this approach (24). This technique resulted in a volume comparable to the patients’ resected mastectomy volumes, as well as restoration of a natural breast shape. The viability of grafted fat was also confirmed using MRI where fat necrosis was not apparent. The final appearance of the reconstructed breast resembled an implant due to the projection afforded by O-FAFF can achieve with the surrounding ADM construct, but also maintained a soft consistency due to the presence of autologous tissue (24). The use of the thoracodorsal recipient vessels can result in a bridge deformity in the axilla. Therefore, the internal mammary vessels represent a more suitable recipient site (10,11,18,23).

The omentum can be harvested through an open abdominal or minimally-invasive approach. Adhesiolysis is done if needed. It is then initially dissected off of the transverse colon and the short gastric vessels are divided. If attachments are present between the omentum and the anterior surface of the pancreas, these are divided as well to open the lesser sac (3). When a laparoscopic approach is used to harvest the omentum, the morbidity associated with the donor site decreases when compared to a laparotomy which can be complicated by hernias and delayed wound healing (10,22).

Depending on the use of the omentum as a pedicled or free flap, will determine the extent of omental dissection. If a pedicled omentum is needed for a local defect, the site of the vascular pedicle is decided. The gastroepiploic vessels on the opposite side are divided with division of the omentum from its attachments to the stomach. The omentum may need to be lengthened depending on the defect site it is being used for. One can better visualize the vascular arcade by shining a light through the omentum to determine the branches to be divided while preserving adequate blood supply and achieving length while minimizing tension on the pedicle. It is recommended that at the time of division for one or both of the gastroepiploic vessels, a large plastic clip be used to easily identify the vascular pedicle.

If a free omental flap for total breast reconstruction is to be performed, the newly reported technique called the O-FAFF can be considered (24). As described above, the omentum is harvested off the greater curvature of the stomach with preservation of the gastroepiploic vessels for microvascular anastomoses (Figure 1). The omentum is then placed within a piece of acellular dermal matrix (ADM), a commonly used biologic matrix that complements implant-based reconstruction, to provide structure to the otherwise amorphous omentum. The ADM is shaped around a breast sizer prior to placement of the omentum within the construct (Figure 2). To avoid the use of an implant or an additional muscle flap with the omentum for breast reconstruction after a nipple- or skin-sparing mastectomy, the omental volume is augmented with fat obtained by liposuction (Figure 3). Fat grafting is an established option to supplement autologous and implant-based reconstruction (25). Concurrent fat grafting provides a solution to the difficulty in predicting the size of the omentum pre-operatively. The O-FAFF construct is then suspended on the chest after microvascular anastomoses are made between the internal mammary vessels and the gastroepiploic vessels (Figure 4). 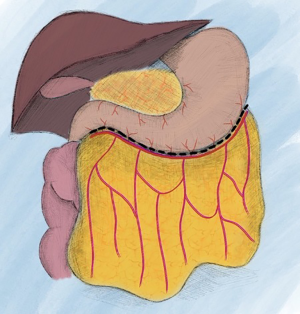 Figure 1 Schematic figure of omental harvest. The omentum can be detached along the greater curvature of the stomach, while carefully dividing the gastroepiploic vessels to be used for the microvascular anastomoses. 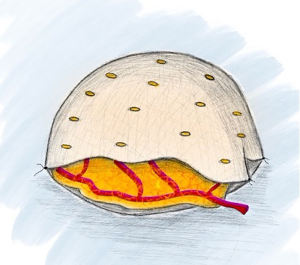 Figure 2 Schematic figure of the omentum and ADM construct. The omentum is placed into a shaped ADM construct that encloses the majority of the omentum with attention to keep the gastroepiploic vascular pedicle exiting a small opening of the ADM for microvascular anastomosis to the internal mammary vessels. ADM, acellular dermal matrix. 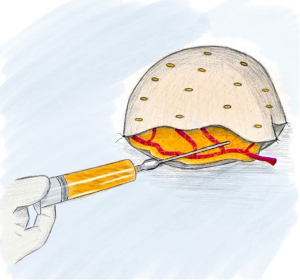 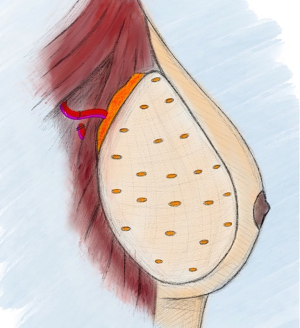 Long-term results have reported a stable size and shape of the omentum within the reconstructed breast, even after radiation (11,17,18,23). Our experience with the O-FAFF also showed stable breast volume without fat necrosis (24). Studies evaluating patient satisfaction after undergoing laparoscopically harvested omentum for autologous breast microvascular reconstruction has shown that all patients have high satisfaction regarding breast volume (17,24).

The omentum is a viable option for autologous breast reconstruction. It is a flap that is soft, malleable, with vascular reliability, low risk of atrophy, minimal donor-site morbidity, and high patient satisfaction (17,18,23). While a pedicled omental flap has historically been used more often, an omental free flap provides more versatility for patients with fewer drawbacks. In particular, the O-FAFF may become the preferred technique because it allows the omental volume to be increased with fat grafting, while providing breast projection with the use of ADM as long as a sufficient mastectomy skin envelope is present. As more women undergo mastectomies for breast cancer or genetic predisposition, the omentum provides a natural-appearing breast reconstruction for those lacking sufficient autologous tissue from more traditional donor sites or who wish to minimize donor site morbidity.

Provenance and Peer Review: This article was commissioned by the editorial office, Annals of Breast Surgery for the series “Cutting-edge of Complex Breast Reconstruction”. The article has undergone external peer review.

Conflicts of Interest: All authors have completed the ICMJE uniform disclosure form (available at http://dx.doi.org/10.21037/abs-20-109). The series “Cutting-edge of Complex Breast Reconstruction” was commissioned by the editorial office without any funding or sponsorship. DHN served as the unpaid Guest Editor of the series and serves as an unpaid editorial board member of Annals of Breast Surgery from November 2019 to December 2021. The authors have no other conflicts of interest to declare.