Breast reconstruction techniques continue to advance with the goal of optimizing patient outcomes (1-3). The nipple-areola complex (NAC) is a particular focus in breast reconstructive surgery with nipple-preservation techniques commonly utilized when oncologically feasible (1,3). Patient-reported outcome measurement tools such as the BREAST-Q continue to demonstrate superior patient satisfaction and quality of life in patients who undergo nipple-preservation (1,4). Similar improvements in physical satisfaction and psychological well-being are significantly improved after gender-affirming mastectomies for transmasculine patients (2,5). Recent reports indicate the importance of nipple sensation and superior outcomes where sensation is preserved (3,6). In male patients, the role of the nipple is not fully understood, though it is well known to serve an erogenous function mediated by sensation (7).

The NAC receives is sensation through anterior and lateral cutaneous branches of the intercostal nerves 3–5 (8,9). The sensory nerves enter the breast tissue as they emerge from the lateral aspect of the pectoralis major muscle as shown in Figure 1. The nerves then travel through the breast parenchyma and insert into the NAC and breast skin. During mastectomy, the glandular breast tissue is surgically excised necessitating the division of sensory nerve branches to the nipple. In an effort to preserve sensation, neurorrhaphy can be performed to re-establish sensory innervation to the NAC (9-11). 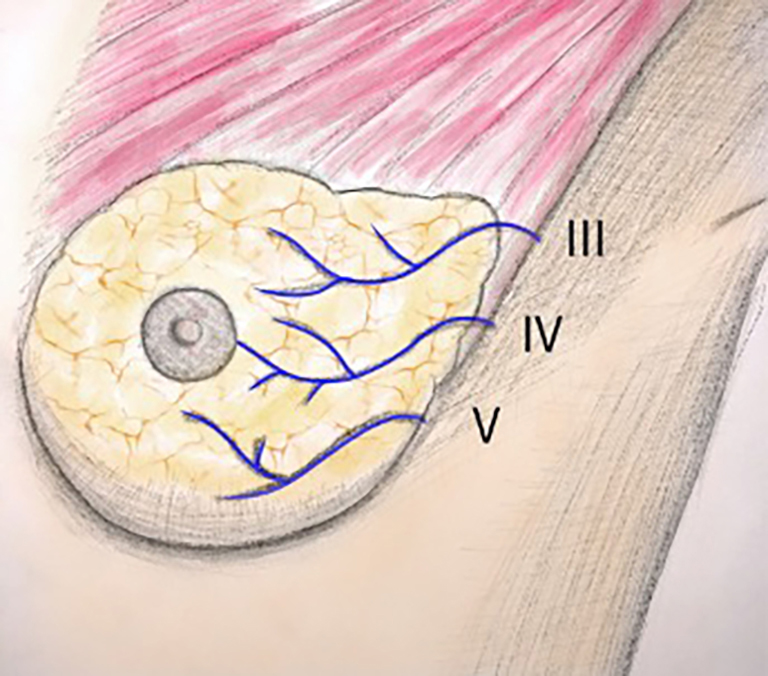 Two groups of patients our authors commonly treat include transmasculine patients undergoing gender-affirming mastectomies and breast cancer patients undergoing mastectomy with breast reconstruction (9,12). In these patient populations, NAC preservation is commonly performed, while efforts to preserve NAC sensation is less commonly reported. To optimize breast reconstructive surgery outcomes, our authors seek to preserve the NAC as well as its sensation. Our authors hypothesize that NAC neurotization can result in improved NAC sensation in patients undergoing mastectomy for both gender-affirmation and oncologic indications. We aim to assess the viability of our NAC neurotization technique and compare outcomes across these two patient groups. We present the following article in accordance with the STROBE reporting checklist (available at http://dx.doi.org/10.21037/abs-20-108).

A retrospective chart review was performed on patients who underwent nipple reinnervation procedures from 2016-2019. The study was conducted in accordance with the Declaration of Helsinki (as revised in 2013). The study was approved by institutional review board of Stanford University (No. IRB00004947) and individual consent for this retrospective analysis was waived. To critically analyze outcomes, control groups of patients who did not undergo nipple reinnervation procedures were also identified. Patients in one arm of the study included transmasculine patients who underwent gender-affirming mastectomy procedures by means of a nipple-sparing periareolar approach or a “double-incision” mastectomy with free nipple graft. All patients met indications for gender-affirming top surgery according to the World Professional Association for Transgender Health Standards of Care guidelines (9,13). A corresponding control group of female patients were identified who underwent prophylactic nipple sparing mastectomy (NSM) without nipple reinnervation for BRCA1 and BRCA2 genetic mutations. 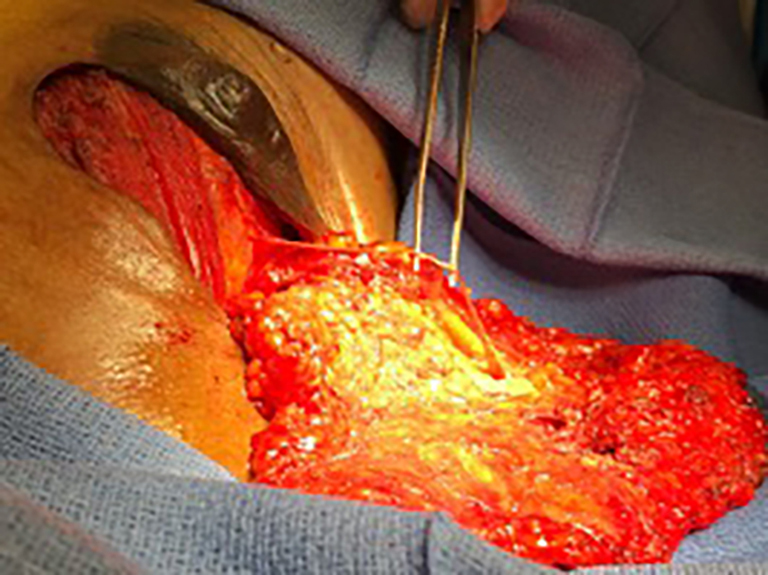 In cases of gender-affirming mastectomy, no nerve autograft or allograft was used. Once the ideal location of the NAC was identified, an appropriately shaped oval segment of skin was deepithelialized in preparation for free nipple graft placement. Donor nerve was then coapted to this deepithelialized dermis using 7-0 prolene suture in an interrupted fashion (Figures 3 and 4). In cases of NSM with immediate autologous breast reconstruction, nerve coaptation was performed to autologous or donor nerve allograft using 7-0 prolene suture in an interrupted fashion. Anastomosis is performed from the donor nerve stump to the allograft in an end-to-end fashion. Nerve graft length was determined by the distance between donor nerve and the anticipated location of the NAC after flap inset. After coaptation, the nerve graft was then tunneled through the abdominal flap to the overlying NAC (Figure 5). At the NAC, the distal end of the donor nerve graft was then coapted to native NAC nerve stump, if identified, or the dermis directly. Distal coaptation was also performed using 7-0 prolene suture in an interrupted fashion. 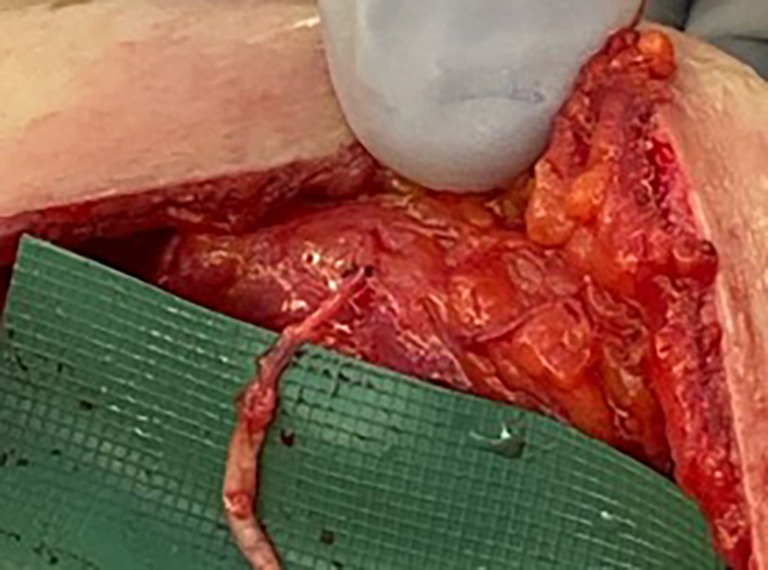 Figure 4 Neurotization of NAC. The lateral intercostal nerve is coapted to the base of the NAC after gender-affirming mastectomy. NAC, nipple-areola complex. 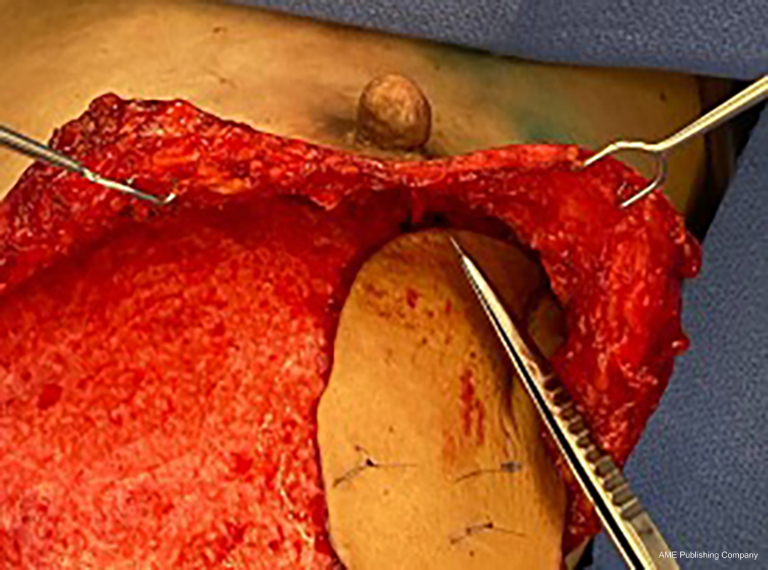 Figure 5 Nerve tunneling tunneled through flap. The nerve is tunneled through the abdominal free flap in a direct path to the NAC base, where it is coapted without tension. NAC, nipple-areola complex.

In comparing outcomes of nipple reinnervation after gender-affirming mastectomy and autologous reconstruction (Table 3), sensation was superior in the gender-affirmation group. Statistically significant differences in the areola (3.38 vs. 4.84, P=0.0001) and peripheral breast skin (2.99 vs. 4.6, P<0.0001) were found. Nipple sensation was also superior in the gender affirmation group (3.36 vs. 3.9, P=0.07), though this only approached statistical significance. The presence of neuroma or hypersensitivity of the NAC we not observed in any patient undergoing neurotization (0%).

This present study assessed the sensory outcomes of direct NAC neurotization amongst patients undergoing gender-affirming mastectomies and patients undergoing NSM with immediate autologous breast reconstruction. In evaluating our outcomes of neurotization during gender-affirming mastectomy, we used a control group consisting of patients undergoing prophylactic NSM for genetic mutation. Differences between groups included patient age and indications for surgery. Overall, patients demonstrated lower sensation in both groups after mastectomy. However, smaller degrees of sensory loss which were not statistically significant were seen in the neurotization group. In contrast, the control group of NSM patients without neurotization had larger degree of sensory loss that were statistically significant. Neurotization resulted in improved sensation compared to the control group across the nipple, areola and peripheral breast skin, which was statistically significant (<0.0001). NAC loss of sensation is well documented with large patient series demonstrating rates of NAC sensation loss as high as 90% following gender-affirming mastectomy (14). Olson-Kennedy et al. also found by a survey-based study that 91% of patients had either permanent or temporary of NAC sensory loss (15). Our findings indicate that NAC neurotization may offer a solution to this commonly reported problem in this patient population.

In comparing our results of neurotization in gender-affirming mastectomy and immediate autologous breast reconstruction, differences were apparent. The gender-affirmation group were younger on average (17.5 vs. 49 years), though BMI was similar between groups (P=0.57). While both groups demonstrated superior sensory outcomes compared to their respective controls, direct NAC neurotization after gender-affirming mastectomy demonstrated superior sensation at the nipple (P<0.07), areola (P=0.0001) and surrounding breast skin (P<0.0001). While the exact mechanisms of these findings are beyond the scope of this study, we estimate that younger patient age likely influenced neurotization outcomes. Previous studies on peripheral nerve repair demonstrated higher rates of sensorimotor recovery with younger patient age (17,18). The use of nerve graft in the autologous reconstruction group may also account for differences in outcomes. While primary repair is ideal in peripheral nerve injury, nerve allograph use has resulted in safe and effective meaningful recovery in patients with peripheral nerve gaps at lengths up to 7 cm (19). This finding may explain why both groups demonstrated recovery, but superior when primary repair performed. Lastly, the additional length of nerve growth through the abdominal free flap was likely to influence outcomes (18).

The concept of a sensate flap is previously reported in the breast reconstruction literature (6). Cornelissen et al investigated the outcomes of nerve coaptation during autologous breast reconstruction (6). Authors describe their technique of coating the 2nd or 3rd intercostal nerve to the sensory nerve of the DIEP flap. 18 patients who underwent nerve coaptation were compared to 14 patients who did not undergo coaptation. Nerve coaptation group was found to have significantly better sensation compared to patients who did not undergo coaptation by Semmes-Weinstein monofilament (4.35 vs. 5.3, P<0.01). In addition, the authors noted better quality of life by BREAST-Q survey with nerve coaptation. Their linear regression model demonstrated high correlation between improved sensation and BREAST-Q scores with statistical significance (R2=0.4, P<0.01). The authors similarly did not report neuropathic pain in their series (6). Our presented technique of direct NAC innervation differs in that the NAC itself is the target of sensory recovery as opposed to nonspecific free flap skin. In fact, it is the NAC that maintains a separate erogenous function from the breast skin (1,3,7). It is our aim to provide this unique level of sensation that is distinct from the surrounding the breast skin with targeted nipple innervation. Semmes-Weinstein monofilament use in both studies allows for some comparison. Our outcomes of nipple sensation with NAC neurotization pairs favorably in both gender-affirming mastectomy (3.36 vs. 4.35) and immediate autologous reconstruction (3.9 vs. 4.35). This difference may suggest that NAC neurotization as a superior technique in reconstructing nipple sensation. However, we did not elicit patient reported outcomes to truly determine superiority.

The NAC is thought to contain a dense sensory nerve population, however recent histologic studies disagree (20). Gutiérrez-Villanueva et al. performed a histologic analysis of the native NAC and found a relative paucity of sensory corpuscles in the superficial dermis (20). However, the authors did note a rich innervation of the deep dermal smooth muscle (20). The methodology of our presents study is unable to shed clarity as to which neural structures become reinnervated. We highlight that our technique of neurotization is at the level of the deep dermis, where the greatest density of sensory innervation is found on the previously reported histologic analysis. We suggest that the innervation likely occurs at this level and thus provides return of sensation to the NAC.

The primary limitation is the retrospective nature of this present study. While we managed to identify control groups, they are not an equivalent substitution for a randomized controlled trial to compare outcomes. Another limitation includes the relatively small sample size. The lack of statistical significance in some of our findings may have related to an underpowered study. Our study is focused on the sensation of the NAC after neurotization. Further study may include a detailed analysis of sensation quadrate specific mastectomy skin as well as the effect of multiple coaptations when surgically feasible. While we utilized objective and repeatable assessments of sensation, we did not perform patient-reported outcome assessments. As we continue to refine our NAC neurotization techniques, efforts will focus on patient reported outcome assessments using validated instruments such as the BREAST-Q and the BODY-Q chest module (2,4).

The NAC has a valuable sensory function that is worth preserving in patients undergoing mastectomy with nipple preservation. We demonstrated that NAC neurotization is a viable technique to reconstruct NAC sensation after mastectomy. In addition, we demonstrate this technique is possible in two patient populations: transmasculine patients undergoing gender-affirming mastectomy and breast cancer patients undergoing NSM and immediate autologous reconstruction. While our neurotization techniques have shown early success, further study is necessary to understand patient satisfaction and quality of life outcomes with this increasingly used technique.

Provenance and Peer Review: This article was commissioned by the editorial office, Annals of Breast Surgery for the series “Cutting-edge of Complex Breast Reconstruction”. The article has undergone external peer review.

Reporting Checklist: The authors have completed the STROBE reporting checklist. Available at http://dx.doi.org/10.21037/abs-20-108

Conflicts of Interest: Both authors have completed the ICMJE uniform disclosure form (available at http://dx.doi.org/10.21037/abs-20-108). The series “Cutting-edge of Complex Breast Reconstruction” was commissioned by the editorial office without any funding or sponsorship. DN served as the unpaid Guest Editor of the series and serves as an unpaid editorial board member of Annals of Breast Surgery from Nov 2019 to Dec 2021. PD has no other conflicts of interest to declare.

Ethical Statement: the authors are accountable for all aspects of the work in ensuring that questions related to the accuracy or integrity of any part of the work are appropriately investigated and resolved. The study was conducted in accordance with the Declaration of Helsinki (as revised in 2013). The study was approved by institutional review board of Stanford University (No. IRB00004947) and individual consent for this retrospective analysis was waived.