A case report of the scarred abdomen and DIEP surgery—contraindication or opportunity for combined abdominal wall reconstruction?

Various patterns of abdominal scarring are traditionally considered relative or even absolute contraindications for deep inferior epigastric perforator (DIEP) flap harvest. There are implications both for the vascular supply to and within the flap and also to the remaining abdominoplasty flaps used for closure of the donor site. In recent years, several authors have advocated techniques of safe flap harvest and donor site closure in the scarred abdomen (1,2). We present the first reported case of successful delayed DIEP breast reconstruction in a patient with a previous ileostomy (right abdominal wall), midline laparotomy and active colostomy (left abdominal wall). We present the following article in accordance with the CARE reporting checklist (available at http://dx.doi.org/10.21037/abs-20-105).

The patient had a body mass index (BMI) of 40 (reduced to 37 by the time of operation) and had undergone midline laparotomy for anterior resection and defunctioning ileostomy (right abdominal wall) for bowel cancer 8 years previously. The ileostomy had subsequently been reversed but she required a subsequent end colostomy (left abdominal wall) due to poor function.

The patient had poor self-confidence and depression and found it difficult to swim and exercise due to the pendulous and scarred abdominal pannus and her absent breast (Figure 1).

Implant based reconstruction was ruled out due to prior radiotherapy. Autologous donor sites were assessed clinically and radiologically and it was felt that the back, thighs and buttocks were not able to provide adequate volume to match the contralateral side, with which she was happy in terms of volume, without multiple stages of subsequent fat grafting. Computed tomography angiography (CTA) did however demonstrate a single perforator around the site of the previous ileostomy supplying the skin with no perforators visible on the colostomy side. She also had a 5.5 cm ventral hernia (Figure 2). 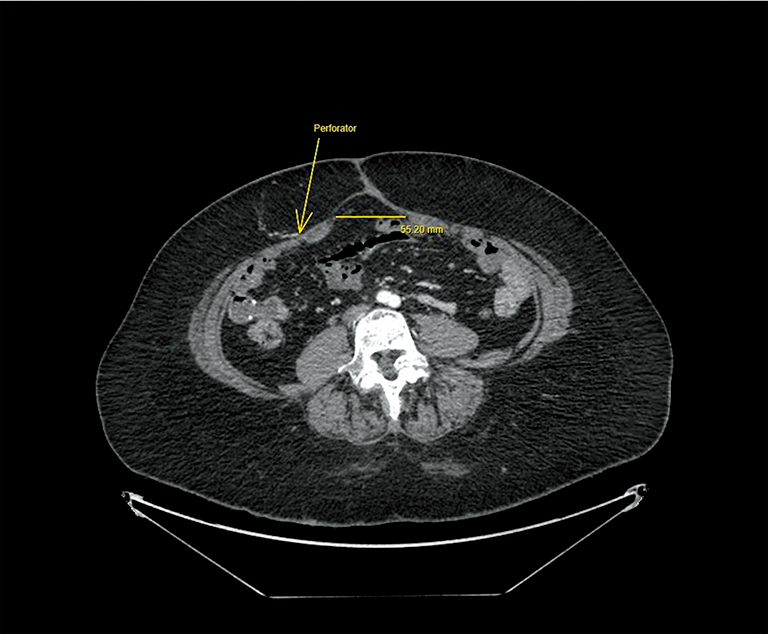 She was reviewed in a joint consultation with a plastic surgeon and colorectal surgeon on several occasions and counselled extensively regarding the risks associated with DIEP flap harvest failure in the presence of extensive previous scarring and the need for colostomy resiting.

The patient was anaesthetised by an anaesthetist with a special interest in microsurgical perfusion optimisation.

The procedure was carried out under general anaesthetic as a joint procedure with a plastic surgeon and a colorectal surgeon. The colorectal surgeon started by mobilising the colostomy on the left abdominal wall and temporarily stapling it off leaving it covered in a betadine-soaked swab and occlusive dressing. The field was re-prepped and a right sided hemi-DIEP was raised. The single perforator was found encased in the scar of the previous ileostomy and suture material but was successfully dissected out and flowing on Doppler assessment. The flap was islanded and intra-flap perfusion was assessed clinically 15 minutes after islanding. The flap was slightly congested and the preserved superficial inferior epigastric vein (SIEV) was full. Only at this point was the mastectomy scar excised and the internal mammary vessels prepared for flap transfer.

The 1,230 g flap was transferred and anastomosed to the internal mammary vessels and superdrained with a second venous anastomosis between the SIEV and a second Internal Mammary Vein. Flap perfusion was satisfactory both clinically and on Doppler and the flap was inset.

The left side of the abdominal skin was then raised preserving both the umbilicus and the previously mobilised colostomy. Further defect in the para-umbilical rectus sheath were identified and the ventral hernia was reinforced with an underlay PHASIX mesh. The site of the DIEP vessel harvest was also mesh reinforced and the anterior rectus sheath repaired directly. An intra-rectus sheath pain catheter was placed.

The central abdominal flap was undermined to allow closure and the left sided abdominal flap was undermined just enough to allow redraping over the colostomy site. Abdominal wall and breast drains were placed. Abdominal closure was achieved and the colostomy and umbilicus were brought out through their new anatomical locations and secured and a new colostomy bag fitted. Wounds were dressed the Prineo tape only and an abdominal binder was gently applied.

The patient underwent routine flap monitoring, analgesia and hydration and was mobilised on day 1. The abdominal binder was used only on exertion and removed on resting. Soft diet was continued until the stoma began to be productive again on day 2. The catheter was removed by day 3 and all drains were removed and the patient was discharged home on day 5.

Wounds were reviewed weekly in the dressings clinic for 3 weeks and the patient had an uneventful recovery. The patient went on to return to exercise and successfully further reduced her BMI by the time of her 6 months follow up and was very satisfied with the outcome of her surgery and had no problems with her colostomy (Figure 3). The patient reported very high levels of satisfaction in all aspects of both the quality of life and satisfaction domains of the reconstruction module of the BREAST-Q. A nipple reconstruction and symmetrising contralateral mastopexy have been planned but postponed at the patient’s request due to COVID-19. 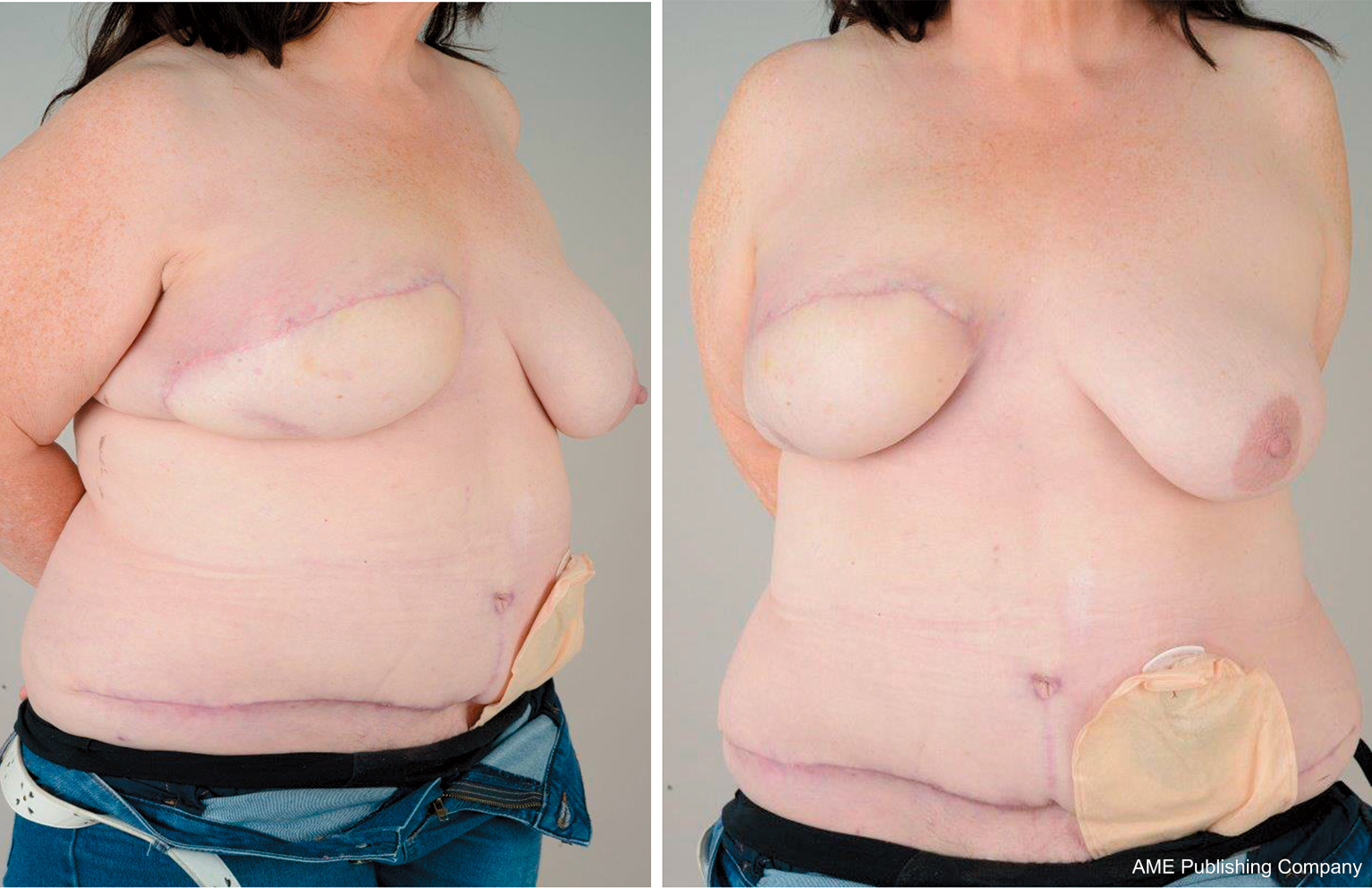 Reporting Checklist: The authors have completed the CARE reporting checklist. Available at http://dx.doi.org/10.21037/abs-20-105

Conflicts of Interest: All authors have completed the ICMJE uniform disclosure form (available at http://dx.doi.org/10.21037/abs-20-105). The authors have no conflicts of interest to declare.