Breast cancer metastasis to the urinary bladder is uncommon and is usually seen in more advanced stages of systemic dissemination. Venous thromboembolism (VTE) is a known complication associated with breast cancer. VTE treatment guidelines recommend anticoagulation therapy in most cases that is not contraindicated by an active bleed or high bleeding risk. We present a patient with metastatic invasive ductal breast carcinoma and secondary bladder metastasis who developed VTE while experiencing hematuria. We discuss the diagnostic tests and treatment performed, and the use of inferior vena cava (IVC) filters as an alternative for anticoagulation therapy in patients with hematuria from urinary bladder metastasis. The following case was presented in accordance with the CARE reporting checklist (available at http://dx.doi.org/10.21037/abs-20-90).

We present a 42-year-old woman with stage IV breast cancer and previous metastasis to the lungs and bones who presented with visible hematuria with small clots. Six years prior in 2013, the patient was a 36-year-old nulligravida patient of Malay race with no significant past medical history of note. Back then she presented with a right palpable breast lump which was suspicious of malignancy on fine needle aspiration cytology. Subsequent core biopsy showed infiltrative poorly differentiated ductal carcinoma with desmoplastic stroma. A staging magnetic resonance imaging showed a right breast 4.2×3.8×2 cm3 speculated, lobulated and rim-enhancing mass that was separate to the overlying pectoralis muscle. A computed tomography (CT) of the chest and abdomen showed a poorly defined enhancing mass in the upper half of the right breast and no distant metastasis.

Post-operatively, the patient received adjuvant AC-TH chemotherapy regimens (adriamycin, cyclophosphamide, paclitaxel and trastuzumab) with maintenance trastuzumab for 1 year after chemotherapy. She also received adjuvant external beam radiotherapy to her right chest and right supraclavicular fossa. Rising serum cancer antigen 15-3 (CA15-3) with increasing lung and bone involvement on CT was noted at a follow-up 1.5 years later in 2015. The patient was given additional radiotherapy to the right pelvis, and started on vinorelbine and trastuzumab regimens, which were later changed to capecitabine and trastuzumab as patient was unable to tolerate their side effects.

The patient underwent a right total hip arthroplasty secondary to right hip avascular necrosis and fracture in 2016. At this time, she had further progression with multiple liver metastases on CT scans. Between 2017 and 2018 the patient underwent multiple cycles of chemotherapy regimens (gemcitabine/trastuzumab, eribulin/trastuzumab and capecitabine/lapatinib). During this period, she continued to develop radiological progression with metastasis in the lungs, retroperitoneal lymph nodes and cervical lymph nodes.

In 2019 six years after the initial breast cancer diagnosis, the patient developed right lower limb deep vein thrombosis and was started on subcutaneous enoxaparin anticoagulation injections. This was suspended the day after in view of visible hematuria with clots. This was not associated with any dysuria or increased urinary frequency. A urologist consult was obtained and urological physical examination was unremarkable. Urine microscopy showed red blood cells but no leukocyte cells. Urine was sterile and urine cytology was negative for malignant cells. CT scan of the chest, abdomen and pelvis showed no cause for her hematuria. Flexible cystoscopy showed an irregular sessile tumor covering the entire bladder trigone with contact bleeding (Figures 1,2). Blood clots were seen at the dependent part of the bladder. The rest of the bladder mucosa was normal (Figure 3). Biopsy of the bladder trigone tumor showed detached fragments of malignant glands with pleomorphic nuclei and prominent nucleoli. Tumor cells were diffusely immunoreactive to HER-2 stain (3+ staining pattern) on immunohistochemical studies, suggesting breast cancer origin. 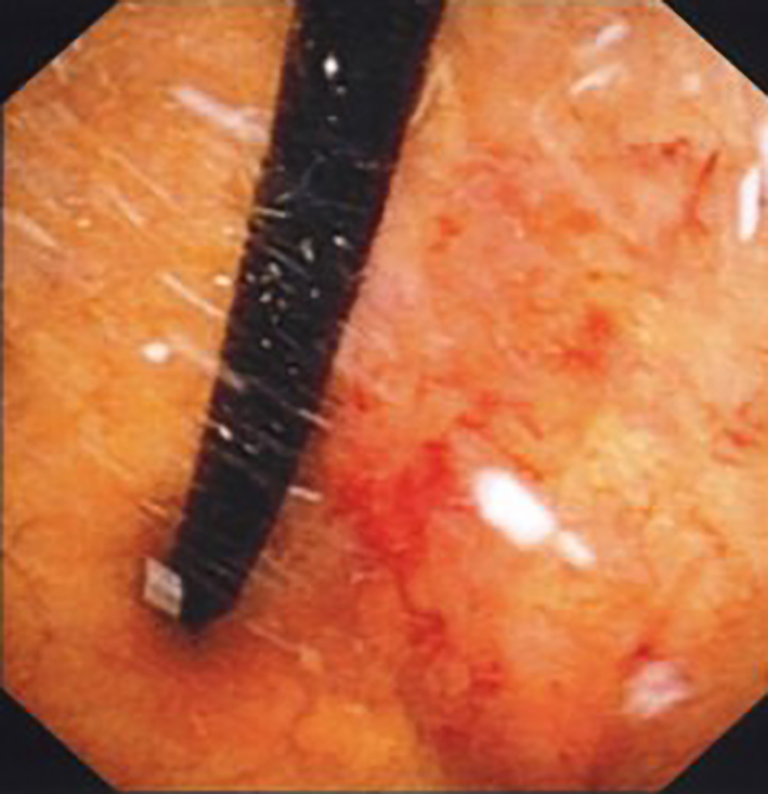 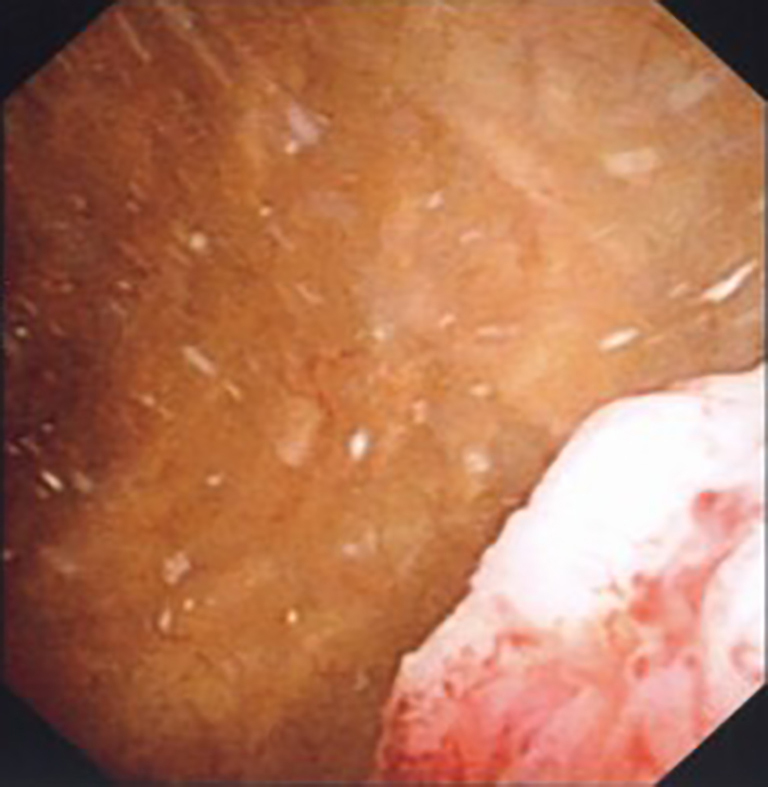 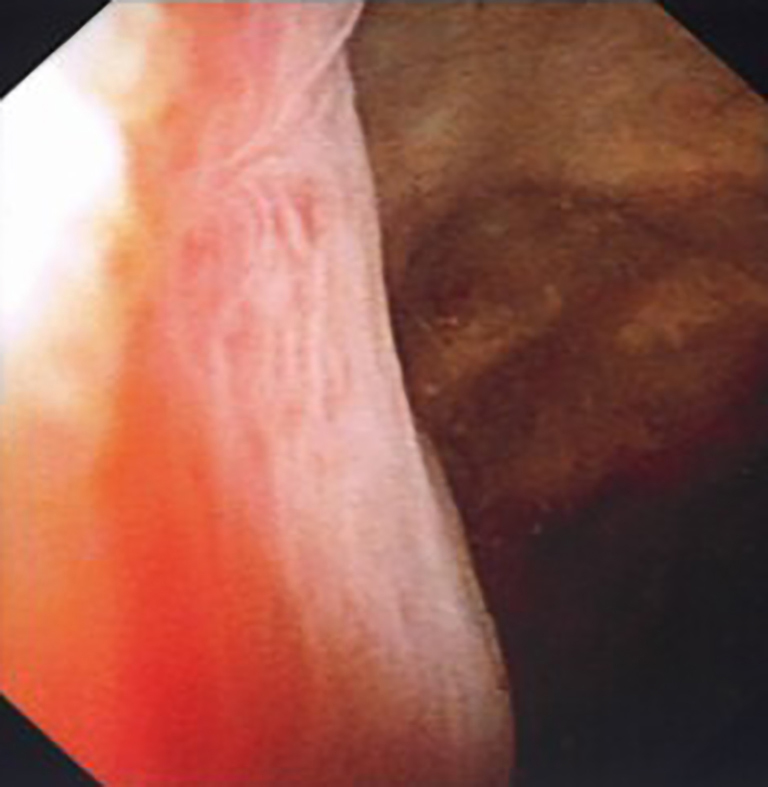 Enoxaparin therapy was discontinued in view of the patient’s active hematuria, and an IVC filter was deployed in the infra-renal portion of the IVC to minimize the risk of pulmonary embolism (Figures 4,5). 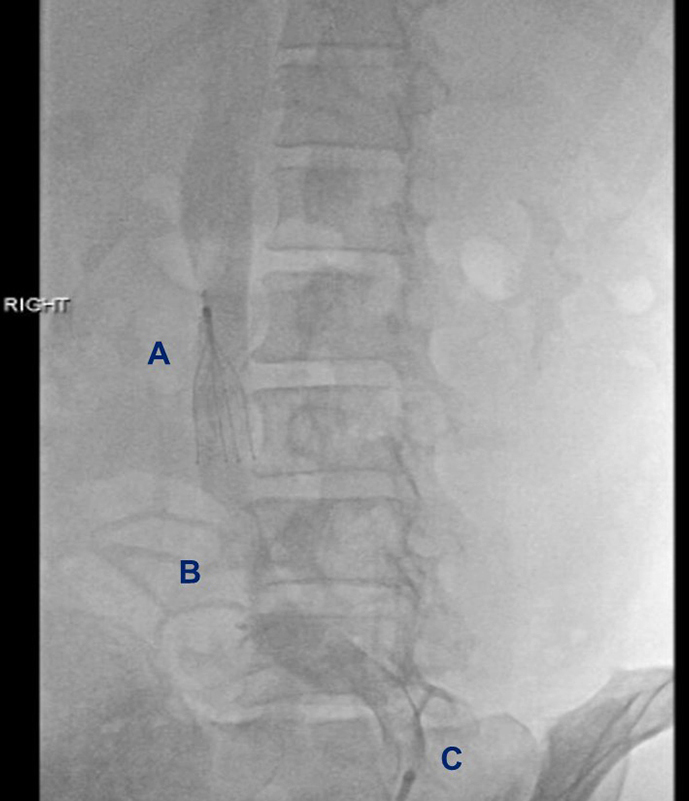 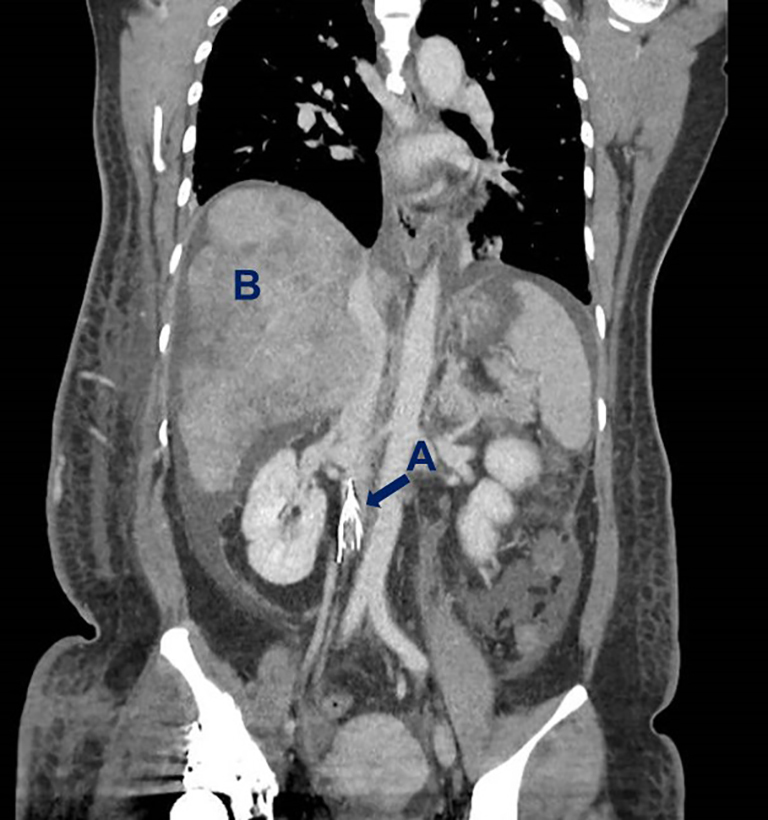 She was subsequently seen by the medical oncologist and was planned to start trastuzumab emtansine (also known as T-DM1), but this was delayed due to right hip septic arthritis caused by methicillin sensitive staphylococcus aureus requiring intravenous antibiotics. A debridement and washout of the right hip was performed by the orthopedic surgeons under general anesthesia. The patient continued to deteriorate thereafter and demised 1 month after the diagnosis of the bladder metastasis (Figure 6). 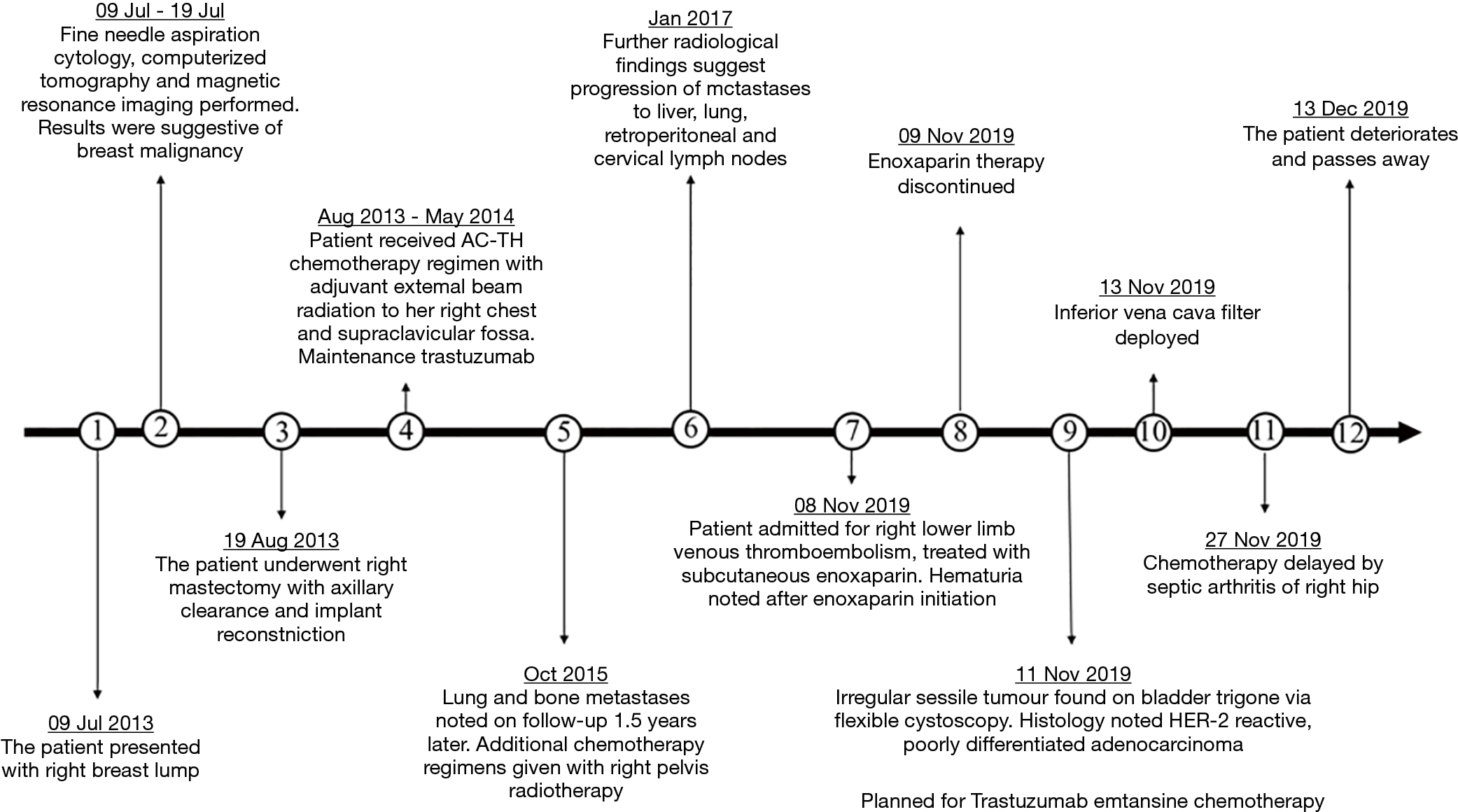 Figure 6 Overview of clinical presentation, diagnosis and treatment of the patient.

All procedures performed in studies involving human participants were in accordance with the ethical standards of the institutional and/or national research committee(s) and with the Helsinki Declaration (as revised in 2013). Written informed consent was obtained from the patient for this publication.

Guidelines for the management of VTE in cancer patients involve initiating anticoagulant therapy. IVC filter insertion may be offered if absolute contraindication to anticoagulant therapy exists, or as an adjunct if there is recurrent or progression of VTE despite optimal pharmacological treatment. The American Society of Clinical Oncology (ASCO) clinical practice guidelines 2019 recommends pharmacological agents such as low molecular weight heparin, unfractionated heparin, fondaparinux (a synthetic factor Xa inhibitor) or rivaroxaban (a direct oral anticoagulant) unless an active bleed, high bleeding risk or severe renal impairment is present (6). The American College of Chest Physicians (CHEST) guidelines 2016 provided similar recommendations, but recommended against the concurrent use of IVC filters with anticoagulant therapy (7).

In literature, Wallace found that IVC filters were effective at preventing pulmonary embolism related deaths in patients where anticoagulation therapy was contraindicated (8). A similar case identified by Sweeney in 2018 described IVC filter insertion for primary bladder urothelial carcinoma and symptomatic hematuria that was complicated by VTE (9). In 2013, Stein et al. reported a case fatality rate relative risk reduction of 0.71 (0.63–0.81, 95% CI, P value <0.0001) between those with and without IVC filter among patients with concomitant breast cancer and VTE (10).

IVC filter placement is not without risks and the treating physician or surgeon should weight the clinical risk against the benefit on a case by case basis. Complications of IVC filters include recurrent thrombosis, major bleeding and filter-related events such as filter thrombosis, filter tilt or filter fracture. In a 2017 retrospective study by Wassef, the reported filter-related complication was 22.2% post IVC filter placement. The most common complications were filter thrombosis (12.5%) and filter tilt (9.5%). Other complications included erosion into IVC wall (3.4%) and IVC filter fracture with subsequent migration of filter pieces (0.6%). Majority of the complications (75.7%) were documented in the first 28 days after insertion (11). Similarly, IVC filter complications were reported in 20% of patients in a 2014 retrospective study by Duffett et al. (12).

Secondary bladder tumors from breast cancers are rare. A recent systematic review by Uday et al published in 2020 noted only 65 cases reported in the literature (13). Other sources of secondary tumors in the urinary bladder include direct extension of pelvic cancer or metastasis from distant organs such as stomach, lungs or skin cancer. Together, they contribute less than 2% of all bladder cancers.

Clinical presentations vary from lower urinary tract symptoms (LUTS) such as macroscopic painless hematuria, increased urination frequency, stress and urge incontinence, nocturia, dysuria, difficulty passing urine, urethral obstruction and back pain (14). Asymptomatic presentations with incidental diagnosis on imaging have been recorded as well, seen in the case identified by Cormio in 2014 (15). Ramsey postulated that symptoms may be clinically apparent only in late metastasis after penetration into the bladder mucosal, and the number of clinical reports may be under-reporting its true incidence (16).

In view of this, we recommend a high degree of clinical suspicious for patients with known breast cancer presenting with either hematuria and/or LUTS. Early urological consult is recommended in such patients. Urinary bladder ultrasound is a safe diagnostic modality for breast cancer patients presenting with urinary symptoms, especially with impaired renal function. Should renal function allows, then a 3 phase CT urogram will be a useful imaging modality as is able to not only detect any filling defects along the urinary tract but also look for degree progression in other solid organs. However, as in our case report, small bladder lesions can still be missed on imaging alone. Flexible cystoscopy is advantageous to identify bladder lesions and perform biopsies for further histological evaluation (17). We recommend that at the time of submitting any biopsy from the bladder, the pathologist is made aware of the prior history of breast cancer as to guide them in their choice of immunohistochemistry. In the absence of suspicious lesions, random bladder biopsies may still identify bladder metastasis as described by Balachandran and Duckett in 2014 (18).

Urinary bladder metastasis from breast cancer carries a poor prognosis. Patient survival can range between 1 month to 2 years with a median survival of 6 months after bladder metastases diagnosis. However, cases of survival up to 5 years post diagnosis have been previously reported in literature, as reported by Poulakis et al. in 2001 (19).

Survival rates in patients with metastatic breast cancer have steadily improved over the last 30 years with the evolution of new treatment options. Five-year survival rates calculated from patients identified between 1985 to 2016 had improved from 10% to 27%, and median survival increased from 13 to 33 months (20).

We postulate that as the cancer specific and overall survival rates for breast cancer patients continues to improve, the incidence of patients presenting with metastasis to the urinary bladder may increase. The ideal systemic therapy in this rare group of patients is currently unknown and further research will be warranted in the future.

This case highlights the difficulties that clinicians might face as overall survival for breast cancer improves. The strength of this case report is that it highlights an effective management modality in patients with VTE who have contraindications to anticoagulation. In our case IVC filter was shown to be an effective alternative to anticoagulation to prevent pulmonary embolus from occurring. The limitations of this case report is that it relates to a single case experience and due to complications from septic arthritis, the patient was not able to undergo further palliative chemotherapy. Hence we are unable to comment on the response to palliative chemotherapy to this rare group of patients.

We report a case of urinary bladder metastasis from a primary breast cancer with concomitant VTE and hematuria. IVC filter placement is a viable option in patients with contraindications to anticoagulation. Breast surgeons and medical oncologists should have a high degree of suspicion for the possibility of metastasis to the urinary bladder. Prompt collaboration with urologist and pathologists is recommended. Prognosis is usually poor and the optimal management in this group of patient is currently unknown and require further research.

Reporting Checklist: The authors have completed the CARE reporting checklist. Available at http://dx.doi.org/10.21037/abs-20-90

Conflicts of Interest: All authors have completed the ICMJE uniform disclosure form (available at http://dx.doi.org/10.21037/abs-20-90). The authors have no conflicts of interest to declare.