Breast cancers are defined as multicentric when it originates from different duct collecting systems with two or more synchronous ipsilateral neoplasms, separated by benign tissue located within different quadrant of the breast (1). The incidence of unilateral multiple breast cancer has been reported to account for approximately 5% of all breast cancers (2). We, herein, report a rare case of a post-menopausal lady with a unilateral multicentric breast cancer comprising of three different histopathological types. We present the following article in accordance with the CARE reporting checklist (available at http://dx.doi.org/10.21037/abs-19-101).

A 57-year-old lady presented with a left breast lump for 1 year. The lump was progressively increasing in size and there was no associated nipple discharge. She attained menarche at the age of 15 years old and menopause at the age of 52. She is married and blessed with 4 children. There was neither history of taking oral contraceptives nor any hormone replacement therapy. She denies smoking and alcohol intake. There was no family history of breast cancer or other malignancies in her family.

Physical examination demonstrated a lobulated swelling of the left breast with multiple satellite nodules and erythematous skin changes. The swelling was mobile, hard in consistency and the nipple was distorted. Multiple mobile left axillary lymph nodes were palpable. The right breast was normal and there were no signs of metastases.

A bilateral breast ultrasound demonstrated a large lobulated mass at the left lower region extending to the sub areolar with small nodules adjacent to the mass. There was also extensive edema with multiple lymphadenopathies at left axillary region. 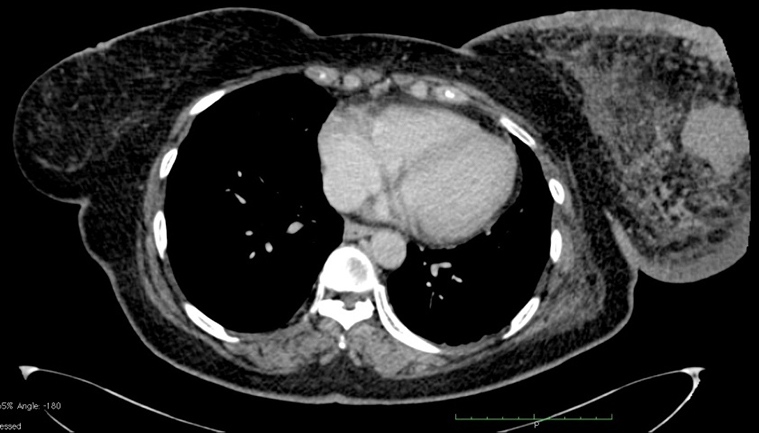 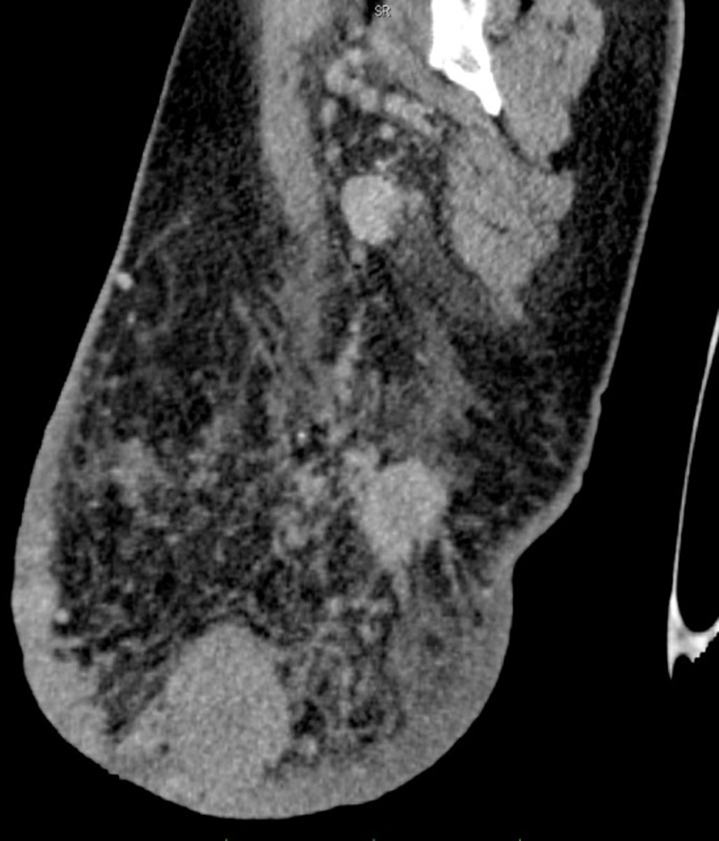 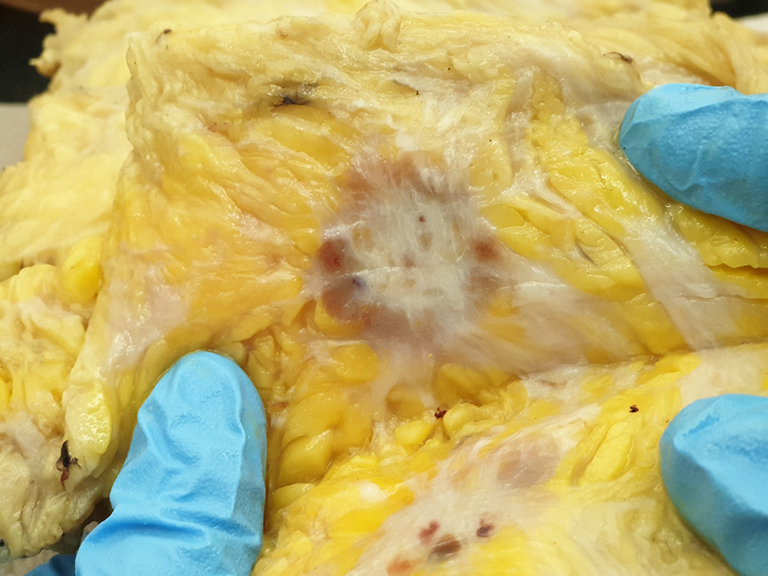 Figure 3 Grossly, the overlying skin was unremarkable. The nipple appeared normal. There were three multicentric breast lesions identified. The largest lesion was located at UOQ of the breast and measuring 40×35×30 mm. The tumor border was ill-defined and infiltrative. It has dirty white solid cut surface with brownish nodular appearance at the periphery. The other lesion at UIQ of the breast (Figure 1) has also similar gross findings and measured 20×28×30 mm. UOQ, upper outer quadrant; UIQ, upper inner quadrant. 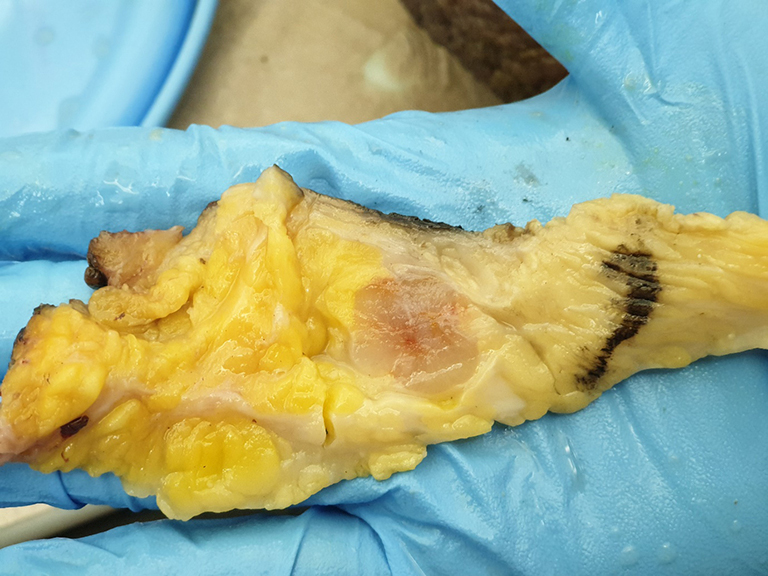 Figure 4 The smallest breast lesion was located at LIQ of the breast (Figure 2) and measuring 11×11×11 mm. It has well defined border with gelatinous solid cut surface. LIQ, lower inner quadrant. 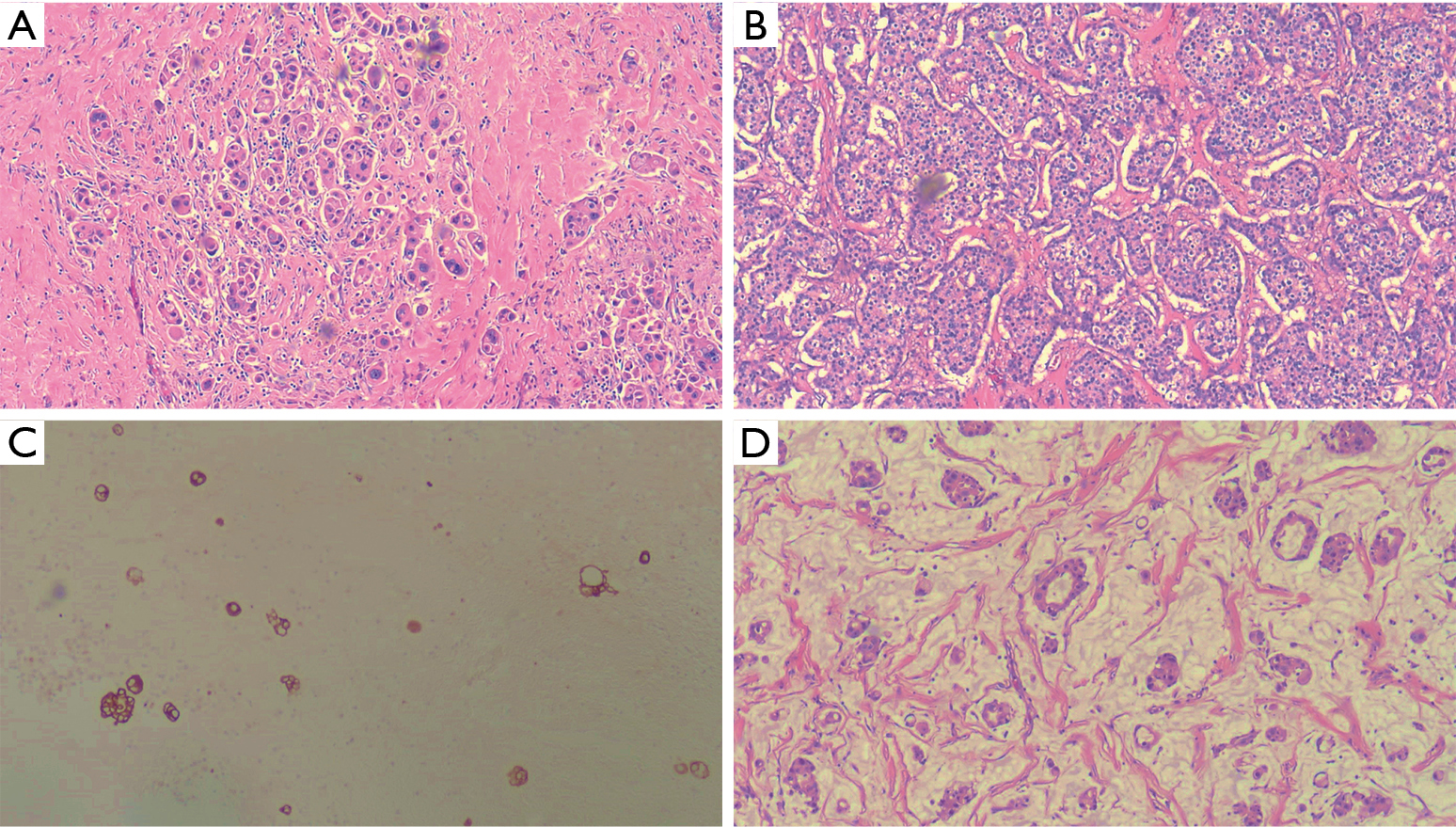 Morphologically, the largest breast lesion [upper outer quadrant (UOQ)] showed malignant cells in interconnecting sheets, trabeculae and cords (Figure 5A) with 15% glandular formation. In less than 30% of the areas, mucinous extravasation was noted. The malignant cells were moderate to markedly pleomorphic and have vesicular nuclei. There were occasional prominent nucleoli and moderate amount of cytoplasm. Signet ring cells were also noted. Mitosis was 1 in 10 high power fields.

The smallest breast lesion [lower inner quadrant (LIQ)] showed extensive mucinous extravasation with floating malignant cells in small nest and trabeculae (Figure 5D). The malignant cells were moderate to markedly pleomorphic and have vesicular nuclei and prominent nucleoli and moderate amount of cytoplasm. Overall, the stroma was fibrotic. Lymphovascular invasion and dermal lymphovascular were present. Ductal carcinoma in situ (DCIS) of high nuclear grade, usual ductal hyperplasia and benign ductal papilloma were also noted. No Paget’s disease of the nipple or direct skin involvement was identified. The malignant tumor involved at superior margin. In total, 21 reactive lymph nodes were examined. Nineteen out of these lymph nodes were involved by malignant cells. Extranodal extension was also present. The malignant tumors expressed estrogen receptor and progesterone receptor protein. Her2 protein expression was negative. Diagnosis of mucinous carcinoma, carcinoma with neuroendocrine feature and mixed mucinous carcinoma (mucinous type and no special type) with modified Bloom and Richardson grade 2 (score 6–7) was given.

The diagnosis of unilateral multifocal breast cancer is usually made following a detailed histological examination of the dissected specimens. CECT (4) and magnetic resonance imaging (MRI) (5) have been reported to reveal a unilateral multiple breast cancer prior to surgery. Similarly demonstrated in our patient where preoperative CECT showed multicentric left breast lesion.

Based on recent studies, surgical options on multicentric or multifocal breast cancer (MMBC) women may undergo breast-conserving surgery as long as the principles of negative margins, appropriate radiotherapy and acceptable cosmesis are met (6-9). Most of them reported a loco-regional recurrence range of 3.0% to 5.1% at a 6-year follow-up in MMBC women with breast conservation, and there was no difference from the patients with unifocal tumor. Furthermore, they did not find any apparent differences in terms of disease-free survival or cosmetic result between MMBC patients and women with unifocal breast cancer after breast-conserving treatment. Hence, breast-conserving surgery is an option and effective for MMBC patients. Another study concluded that breast conserving surgery was a safe option in selected MMBC cases, particularly those women aged 50–69 years old with small multifocal tumor (<1 cm) and without an extensive DCIS component (10).

Multicentric breast cancers have a negative impact on prognosis. They are related to higher loco-regional and distant relapse independently from the type of surgery performed. Multicentric tumors have a worse biological behavior and that the presence of multiple foci should be considered in planning adjuvant treatments (11).

The authors would like to thank the Director General of Health Malaysia for his permission to publish this article.

Reporting Checklist: The authors have completed the CARE reporting checklist. Available at http://dx.doi.org/10.21037/abs-19-101

Conflicts of Interest: All authors have completed the ICMJE uniform disclosure form (available at http://dx.doi.org/10.21037/abs-19-101). The authors have no conflicts of interest to declare.