Breast masses are not uncommon in otherwise healthy young children. They are frequently seen in surgical or pediatric clinics and often results in parental anxiety. However, most of these lesions are benign or due to premature thelarche. Carcinoma of the breasts in children is rare, accounting for less than 1% of all childhood cancers and less than 0.1% of all breast cancers (1,2). However, high index of suspicion is still necessary especially when the breast mass increases in size over the time—and biopsy should be considered.

A variety of breast cancer histotypes have been described in young children in the literature, including secretory carcinoma, intraductal, lobular, medullary and inflammatory carcinomas (2-5). A recent report in January 2020 described a 6-year-old Japanese girl with secretory breast cancer, in which the diagnosis was not established by pre-operative imaging. Pre-operative ultrasound elastography suggested suspicious lesion but secretory breast cancer was diagnosed only when excisional biopsy was performed (4).

Here we report a rare case of pediatric secretory breast cancer diagnosed on pre-operative core needle biopsy, but pathological slide review and subsequent surgical excision of the lesion confirmed the diagnosis of intraductal papilloma without evidence of malignancy. This is a unique report describing the importance of pathological re-examination in pediatric patients diagnosed for breast cancer by core needle biopsy. Informed consent was taken from patient for clinical data storage and research publication. We present the following article in accordance with the CARE reporting checklist.

Clinical history on the first episode of nipple discharge

This patient was a 10-year-old Hong Kong Chinese girl who first presented with right blood-stained nipple discharge in December 2018. She had unremarkable past health and had no family history of breast or ovarian cancers. Physical examination found a single duct blood stained right nipple discharge. There was no palpable breast lump or axillary lymphadenopathy.

Ultrasound (USG) was arranged after the first clinic consultation and showed dilated ducts with suspicious intraductal papillary lesion in the right breast at 12-1 o’clock. The left breast was normal. USG guided core needle biopsy was performed and found intraductal papillary neoplasm with atypia.

Patient was then regularly monitored in the breast surgery clinic. Patient remained well for six months after the excisional biopsy but she returned to our clinic in June 2019 for another episode of right nipple discharge.

USG was repeated in June 2019 and found focally dilated duct containing a vascular echogenic lesion (4 mm) just underneath the surgical scar at right breast 1 o’clock position 2 cm from nipple, highly suspicious of intraduct papillary lesion (Figure 1). USG-guided core needle biopsy was performed on the same day and showed cores of fibroadipose tissue with small fragments of atypical epithelial proliferation. The scanty lesional cells form complex glandular and tubular patterns. Extracellular pale blue mucinous stroma and pink secretions were noted. The cells had low grade cytologic atypia, eosinophilic cytoplasm, fine chromatin and rather uniform nuclei. Mitotic figure was not found (Figures 2,3). The core biopsy had been examined by three independent pathologists, with a discordance in pathological suggestions varying from recurrent intraduct papillary lesion involved by atypical hyperplasia or ductal carcinoma in-situ to secretory carcinoma. Due to the small sample size, the limited number of lesional cells were unfortunately depleted in immunostaining. A definitive diagnosis could not be made. 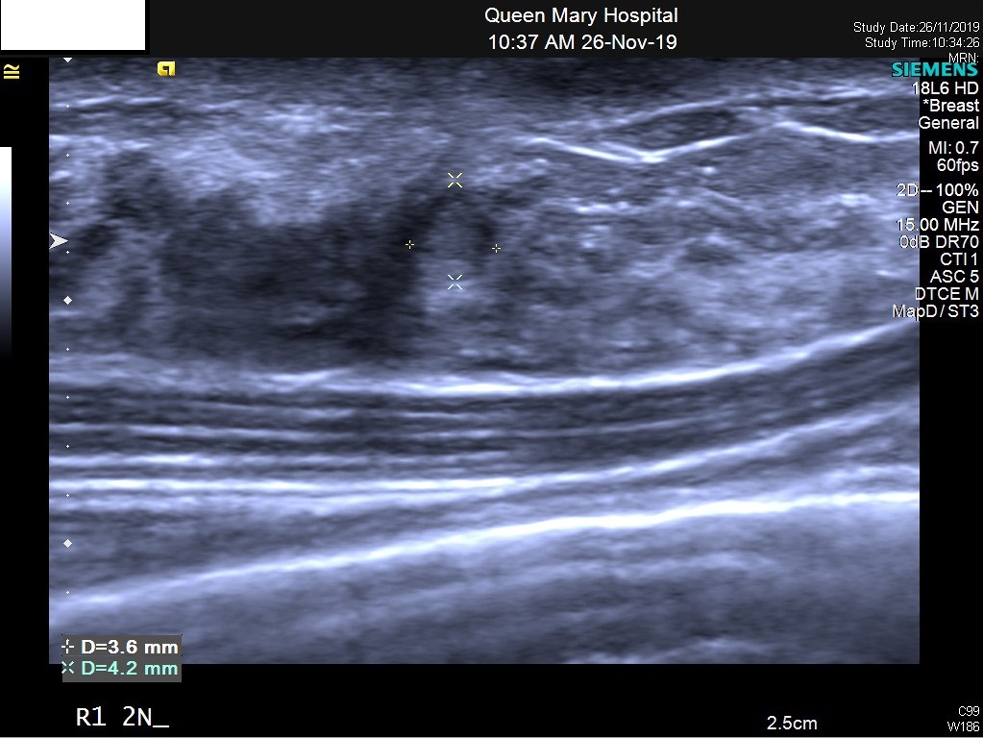 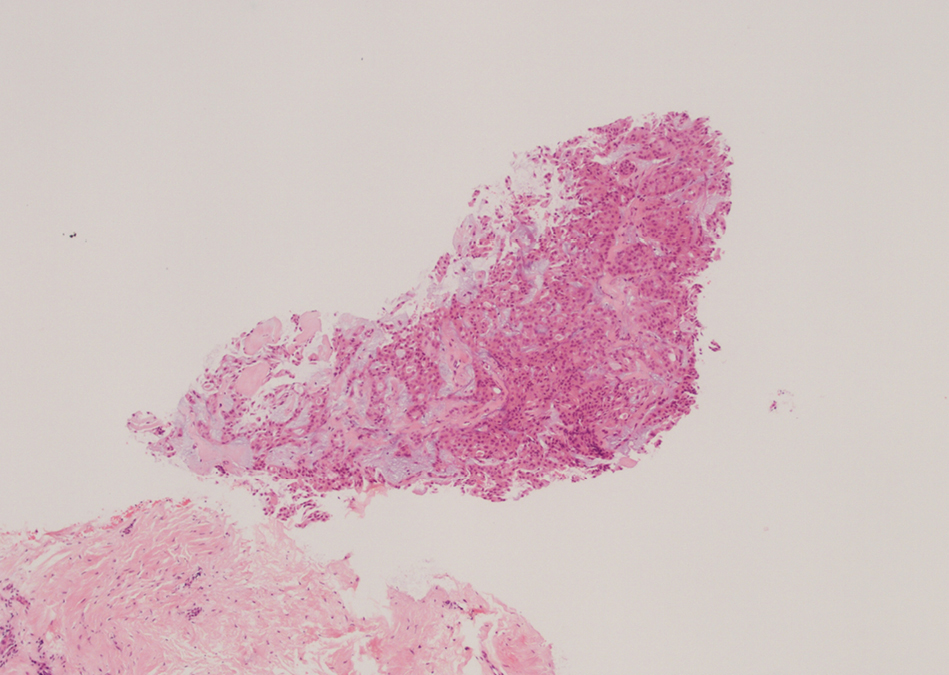 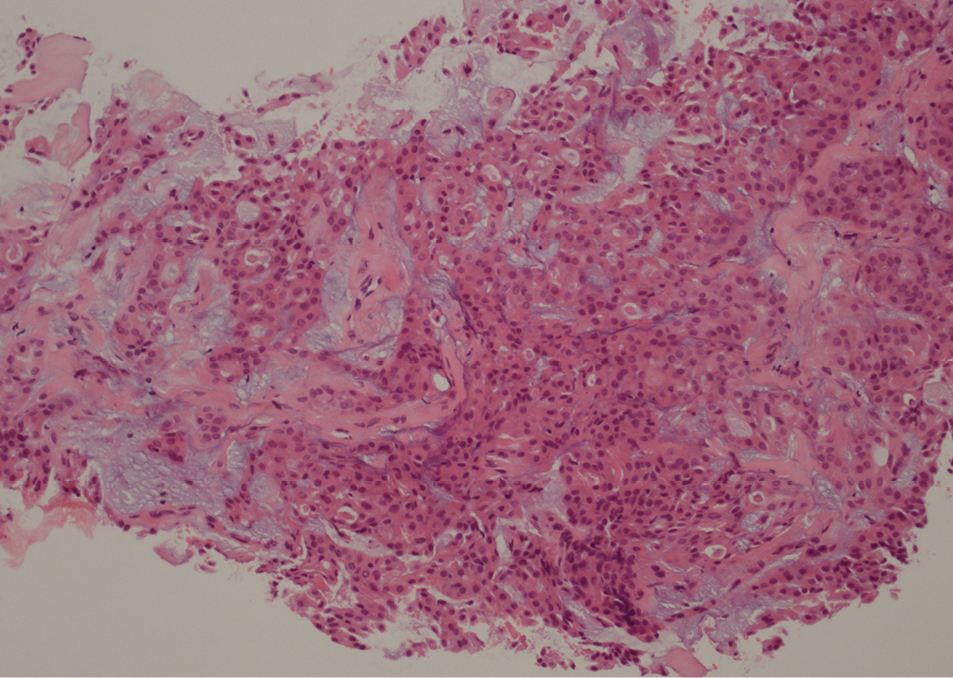 Figure 3 The epithelial cells have low grade cytologic atypia, eosinophilic cytoplasm and fine chromatin. Mitotic figure is not found (HE, ×100).

In view of pathological discordance in the core biopsy and an intraductal carcinoma or secretory carcinoma cannot be entirely excluded, patient received a hookwire guided excision in December 2019, 11 months after the first excision. The removed specimen was 2.5 cm ×2 cm ×1 cm in size. Operation was uneventful. Pathology examination found intraductal papillary lesion in several adjacent dilated ducts. There were fibrovascular cores associated with solid proliferation of epithelial cells punctuated by mildly irregular to round luminal spaces. The epithelial cells are polygonal and possess eosinophilic cytoplasm, oval nuclei, fine chromatin and small distinct nucleoli. Mucinous material was observed between the fibrovascular cores and the epithelial cell proliferation. Immunostaining for p63 was able to highlight the focal presence myoepithelial cells in the papillary lesion. The epithelial proliferation retained expression of high molecular weight cytokeratin (CK5/6). They exhibited heterogeneous weak to moderate positivity for estrogen receptor. Overall features suggested intraductal papilloma with superimposed epithelial hyperplasia. There was no evidence of in-situ or invasive malignancy. Excision margins were complete.

External expert pathology review and further studies including pan-Trk immunostains and FISH for ETV6 were arranged. The tests were not suggestive of secretory carcinoma.

Patient was then monitored regularly in the breast surgery clinic with interval surveillance breast imaging. She was last seen in January 2020 and remained asymptomatic.

Secretory breast cancer is a rare but distinct subtype of breast carcinoma. It was originally described as juvenile breast cancer in 1966 and has been reported in young children in the literature (6,7). It has a generally favorable prognosis and as its name implies, the classical histopathological features include the presence of abundant intracellular and extracellular eosinophilic secretion that stains positive for periodic acid-Schiff. Most tumors stain positive for S100 and negative for estrogen, progestogen and HER-2 receptors.

Although secretory breast cancer is “commonly” described in pediatric age group, the term juvenile breast cancer described by McDivitt and Stewart is probably a misnomer as subsequent studies have reported secretory carcinoma in adults in 1980 (6,8). Secretory breast cancer has been reported in patients with wide range of ages, from 3 to 86 years old (9,10). Breast cancer in young children is generally rare and accounts for only 1% of all pediatric cancers (1). This case demonstrates the importance of taking clinical context into consideration when interpreting an unusual pathology report. Fine needle aspiration cytology (FNAC) and core needle biopsy are commonly used in adults for obtaining pre-operative diagnosis of breast lesions (11). FNAC and core needle biopsy can be performed in pediatric patients, however due to the invasive nature of the investigation, it is often performed under sedation or even general anesthesia to minimize sampling error by unwanted patient movement or struggling (3). Pre-operative diagnosis with cytology or histopathology allows careful planning of the extent of surgery in dealing with pediatric breast lumps, especially when prepubertal breast tissue should be preserved as much as possible for future normal breast development (11). Unusual diagnosis of breast cancer in a young child like in this case warrants prudent pathology review.

Gohara et al. described the use of ultrasound elastography to predict the chance of malignancy in pediatric breast lump (4). Ultrasound elastography has the beauty of being non-invasive, and able to indicate suspicious lesions (4). However, its use is limited by the availability of individual breast centers.

Being a case report, we recognize the inherent weakness of not being able to draw any statistically significant conclusion. However, intraductal papilloma in a pre-pubertal child is extremely rare. This case is also unique that the girl was “mistakenly” labelled as having a secretory breast cancer by pre-operative core needle biopsy. In fact, this case has demonstrated the diagnostic difficulty and ambiguity of pediatric breast lesion. Wide excision (or mastectomy) in pre-pubertal girl is a major undertaking. Patient’s family was satisfied with the decision of not undergoing radical breast cancer surgery immediately after the initial core needle biopsy. We believe prudent pathological re-examination is warranted for any pathological discordance with clinical or radiological features.

We illustrated a case of recurrent intraductal papilloma mimicking secretory breast cancer in a 10-year-old girl. Breast cancer in a prepubertal child is extremely rare, pathological re-examination should be performed whenever in doubt before contemplating radical cancer treatment.

Reporting Checklist: The authors have completed the CARE checklist. Available at http://dx.doi.org/10.21037/abs-20-47

Ethical Statement: The authors are accountable for all aspects of the work in ensuring that questions related to the accuracy or integrity of any part of the work are appropriately investigated and resolved. Informed consent was taken from patient for clinical data storage and research publication.