Male breast cancer is a rare disease, accounting for less than 1% of all breast cancer diagnoses worldwide (1). The most common type of male breast cancer is invasive ductal carcinoma (93.7%); other different histological types include papillary (2.6%), mucinous (1.8%), lobular (1.5%), and medullary (0.5%) (2-4). Breast sarcomas constitute less than 1% of all breast tumors in the literature (5-9). Mahalingam et al. reported the first case of malignant fibrous histiocytoma (MFH) of a male breast (10). So far, only 5 cases of male breast MFH have previously been reported.

We report a new rare example of MFH occurring in an old man, with bronchopulmonary comorbidities, the second case with storiform-pleomorphic histology reported in the literature until now.

We present the following article in accordance with the CARE reporting checklist.

A 74-year-old patient affected with severe obstructive bronchopulmonary disease. He has no family history of breast cancer or other malignancies. The patient was admitted at our observation on August 17, 2012, with rapidly growing painful mass in the left breast. The mass was firm to palpation and poorly demarcated at the physical examination, without cutaneous changes or axillary adenopathy. Ultrasound of the left breast showed a solid lobulated mass, with a liquid and a hypoechoic and poorly defined zone, with significant increase in vascularity, measuring 48 mm in diameter. The lesion was categorized according to the Breast Imaging Report and Data System (BIRADS) as BIRADS 4C. On August 22, 2012 a magnetic resonance imaging (MRI) (Figure 1) showed an irregulary enhanced area of 47 mm in diameter with neoangiogenetic vascularization without pectoralis muscle infiltration. Above this lesion, a second localization of 17 mm in diameter was recognized. Ultrasound guided needle core biopsy, which was done on August 27, showed, at microscopic examination, malignant cells, with pleomorphic nuclei and high mitotic index, Ki-67 30%, revealing a high-grade sarcoma composed of spindle-shaped cells. Immunohistochemical staining showed the tumour positive only for vimentin and CD68R, negative for cytokeratin AE1/AE3 and MNF-116, CD34, smooth muscle actin, desmin, myogenin, and S-100 (Figure 2A,B,C). Before surgery, the patient underwent a computed tomography scan of the chest, abdomen and pelvis and the result was negative for distant metastasis (on September 6, 2012). A few days before surgical excision of the neoplasm, the patient underwent sentinel lymph nodes biopsy (SLN) and the result was negative (3 nodes excised). As the pre-operative diagnosis was of undifferentiated pleomorphic sarcoma adjacent the fascia of pectoralis, a radical mastectomy was performed on September 28, 2012. The final pathologic report (Figure 2D) showed a nodular formation of 60 mm in diameter, composed of spindle cells, arranged in interlacing fascicles. Neoplastic cells presented pleomorphic nuclei with many atypical mitoses. The surgical margins of the mammary gland were widely free of tumor; the tumor was near the muscular fascia without infiltration and the skin and nipple were free of neoplastic invasion. Necrosis and angiolymphatic invasion were not present. Immunoreactivities for ER, PR, Her-2, desmin, cytokeratin (AE1/AE3 and CK5/6) and EMA were negative, while those for vimentin and CD68R were positive. The histologic features described above, along with the immunohistochemical profile of the tumor rendered a diagnosis of MFH. The AJCC (8th edition) of TNMG staging of soft tissue sarcomas was pT3pN0(sn). The-post operative course was regular without complications. The patient was treated with chest wall irradiation therapy. A total dose of 46 Gy with two tangential wedged fields by using 6-MV photons of a linear accelerator was given instead of the 50 Gy planned because the patient was hospitalized with pneumonia and the RT treatment was stopped.

Figure 1 Irregulary enhanced area of 47 mm of diameter with neoangiogenetic vascularization without pectoralis muscle infiltration. The lateral view shows a second localization above the main mass. 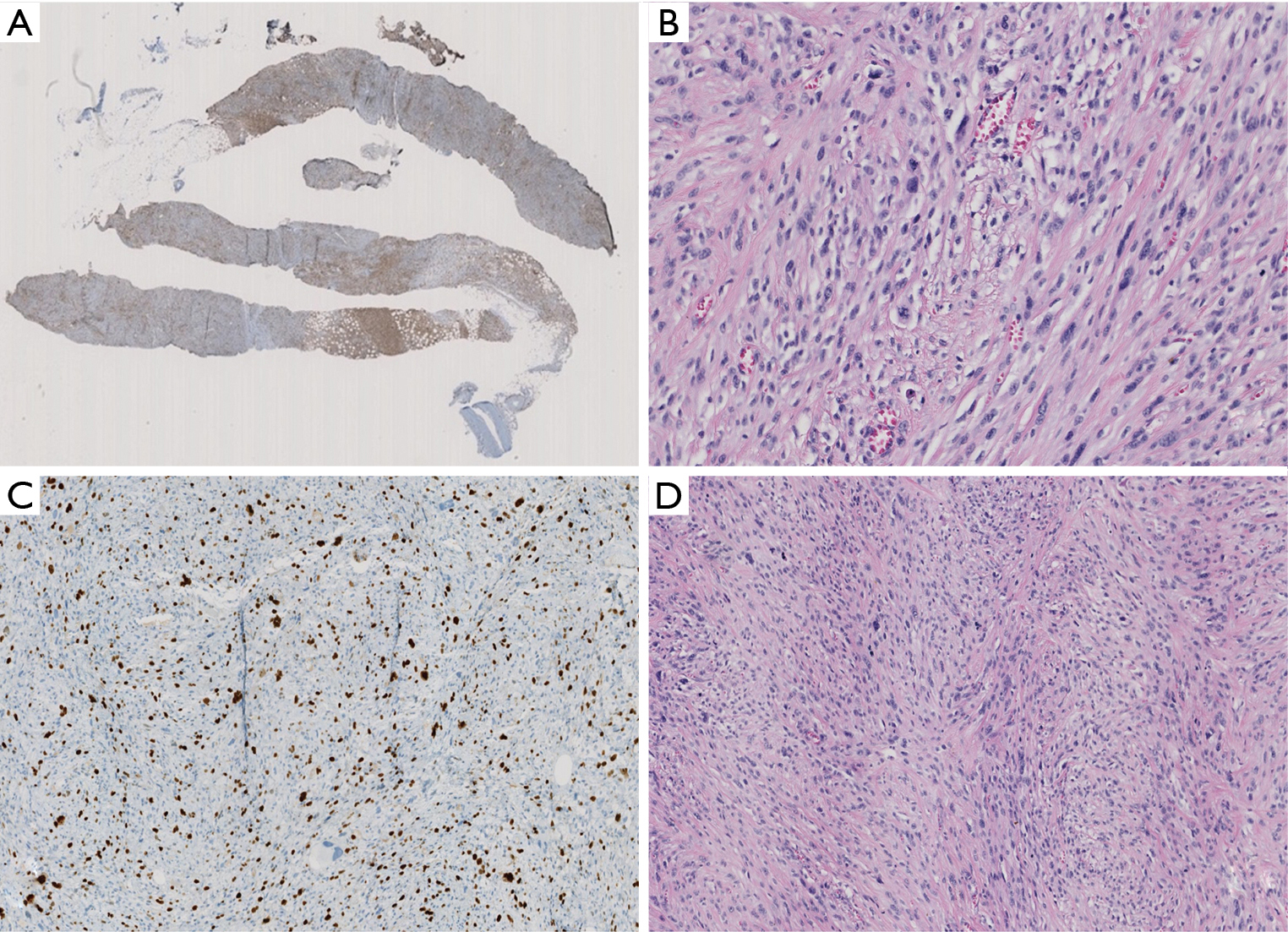 The patient, after 65 months, died for bronchopulmonary compliances without local recurrences and/or metastases (Figure 3).

Figure 3 The timeline of patient exhibits the most important steps on clinical presentation, diagnosis, treatment and follow-up.

Written informed consent was obtained from the patient for publication of this study and any accompanying images.

MFH was first described as a clinicopathologic entity by O’Brien and Stout in 1964. The most frequent primary sites of MFH are the lower (49%) and upper (19%) limbs, and the retroperitoneum and abdomen (16%). MFH of the breast is extremely rare, accounting for less than 1% of all breast malignancies. Currently, MFH is considered to be an undifferentiated sarcoma (9).

Differential diagnosis for MFH is a challenge, because its morphological features are complex and the term MFH should be given as a diagnosis of exclusion with regards to both histopathological and immunohistochemical viewpoint. Differential diagnosis of MFH includes spindle cell (metaplastic) carcinoma (these cases are characterized by positive immunohistochemical staining for cytokeratin), pleomorphic rhabdomyosarcoma, and malignant phyllodes tumors (cystosarcoma phyllodes). Histological examination must exclude invasive ductal carcinoma; leiomyosarcoma usually has small areas with conventional smooth muscle cytomorphology and a fascicular growth pattern with positive expression of desmin and SMA in the fascicular spindle cell component. Liposarcoma shows lipoblasts; rhabdomyosarcoma shows alveolar structure and striated muscle structure vimentin positive. Osteosarcoma shows osteosarcomatous elements within metaplastic carcinoma.

MFH is a tumor rarely seen in the breast; it is identified mostly in middle aged women. Most undifferentiated pleomorphic sarcomas have appeared in patient who are in their sixth and seventh decade of life. Approximately 50 cases of female MFH of the breast have been reported in the literature (14-17). Male breast may also develop malignant fibrous histiocytoma but they are extremely rare (3,9,18). They can occur either primarily or secondarily after radiation exposure. Adverse prognostic factors include tumour size, the presence of distant metastasis, and older age. MFH may have a high rate of local recurrence (44%), distant metastasis (42%) to the lung bony skeleton pleura, and liver (15). Regional lymph-node involvement ranges from 12% to 32% (5,18-21) so SLN remains the preferred procedure of axillary lymph node staging to avoid routine axillary dissection; in the absence of skin involvement, lymph node metastasis is rare. Overall, the 5-year survival rate of patients with undifferentiated pleomorphic sarcoma is roughly 50%. The most common surgical procedure for male breast cancer is mastectomy (total o radical) that is used in approximately 85–90% of patients; other surgical procedures are lumpectomy with or without radiation (1% to 15%). In our case, the surgical choice was radical mastectomy; in fact the tumor was of 4.7 cm in the diameter at the pre-operative magnetic resonance, near the pectoralis fascia, with a second localization of 17 mm in diameter; the final pathologic report confirmed the presence of a single neoformation of 60 mm in diameter. Callery et al., in a review about sarcoma of the breast, reported that there is low incidence of local recurrence when total mastectomy or more extensive operation was the initial treatment (8%) vs. a high incidence of recurrence (53%) in local excision. Because excellent local control is possible with mastectomy alone, conservative surgery and multimodal adjuvant therapy should be considered investigational (11).

The role of adjuvant therapy for MFH is uncertain due to the lack of prospective randomized clinical trials. The lack of clinical benefit from adjuvant chemotherapy could possible by due to the relatively large tumor size at the diagnosis (9).

In MFH breast tumors, adjuvant radiotherapy could be considered for patients in whom tumor is bigger than 50 mm, close to positive margins. In our case, despite a surgical intervention of radical mastectomy, adjuvant radiotherapy was added because of the tumor size (18,21). The effectiveness of radiation therapy is not clear (22). van Niekerk et al. find that preoperative radiotherapy could achieve slight regression of both the primary tumor and metastasis to the axillary lymph node (23). Others authors doesn’t recommend radiotherapy after a clear cancer-free surgical operation (24).

Our experience helps to define the correct surgical and diagnostic approach in male breast MFH. The involvement of more professional figures and clinical decision sharing among breast unit members allowed a right diagnosis since preoperative phase. This guaranteed adequate planning of the treatment strategy. Specifically, unlike other experiences, axillary dissection and its serious consequences were spared to the patient.

This led to long survival, and the patient died after 65 months of follow-up without evidence of cancer recurrence. Unfortunately, the most important limitation of our case report is related to single experience.

In conclusion, MFH of the male breast is rare; mastectomy, modified o radical, is the treatment of choice to prevent local recurrence. The SLNB is recommended for axillary lymph node staging; axillary dissection is indicated only in case of the presence of metastatic lymph nodes. Adjuvant radiotherapy is indicated for tumours >5 cm in diameter, close margins, skin or muscle infiltration and not relevant data support adjuvant chemotherapy.

Conflicts of Interest: All authors have completed the ICMJE uniform disclosure form (available at http://dx.doi.org/10.21037/abs-20-35). The authors have no conflicts of interest to declare.

Ethical Statement: The authors are accountable for all aspects of the work in ensuring that questions related to the accuracy or integrity of any part of the work are appropriately investigated and resolved. The study was conducted in accordance with the Declaration of Helsinki (as revised in 2013). Written informed consent was obtained from the patient for publication of this study and any accompanying images.