Seroma formation following mastectomy is a common problem and this appears to be more frequent in patients who have undergone modified radical mastectomy compared to breast conservation surgery. The incidence of post-mastectomy seroma is in excess of 50% in some studies (1). The aetiology of post-mastectomy seroma is largely speculative but is widely accepted to be multifactorial. Correlations with patient age, obesity, hypertension and a tentative association to breast size, lymph node status and surgeon’s individual drain and quilting techniques have all been reported in the literature (1-4).

Collections which persist months post-mastectomy may be recalcitrant to conservative therapies and can pose a challenge to the patient and clinician. In addition, repeated aspirations predispose to sepsis, wound breakdown and potentially delaying adjuvant therapy. We present a case study where such conservative measures have failed and surgery was offered to address the problem of an encapsulated seroma and the subsequent dead space which ensued following its excision. Intra-operatively, the encapsulated seroma was found to be stuck to the chest wall muscles, entangling a nerve in the scar tissue and with a couple of lymphatic vessels, feeding directly into the capsule. These intraoperative findings explained why such chronic seromas are refractory to conservative management. Importing vascularised tissue, ensures tension free closure and reduces unfavourable deep scar. It highlights the fact that surgical treatment should be considered in similar cases. The patient had uneventful recovery, with no further recurrence of the seroma at follow-up, 10 months down the line. We present the following case in accordance with the CARE guideline checklist.

A 36-year-old lady was diagnosed with left breast cancer in 2012, shortly after having had undergone bilateral breast reduction. Other than having had an acoustic neuroma and being on citalopram for depression, she was otherwise fit and well. She had quitted smoking cigarettes when she was 30 years old. Her body mass index (BMI) was 33.

A left-sided simple mastectomy and axillary lymph node clearance was performed in 2012, which was followed by adjuvant radiotherapy and chemotherapy. One year later, in 2013, she underwent a risk-reducing simple mastectomy on the right side with a revision of the left mastectomy scar. Since then, she kept developing recurrent seroma of the lateral chest wall, confirmed by ultrasonography. This also left her with very stiff left shoulder with axillary pain.

She was initially referred to our plastic surgery unit in 2016. At this time point, she had developed symptomatic changes with altered sensation and neuropathic pain along her left arm with limited and painful shoulder movement. This correlated with florid radiotherapy changes to the skin and subcutaneous tissue planes in the chest wall extending into her axilla. Conservative therapy in the form of active physical therapy was recommended. The active range of movement (ROM) in her shoulder marginally improved with intensive physiotherapy but the seroma was recalcitrant to regular percutaneous aspirations, some of which were performed under ultrasound guidance, and these recurring procedures became traumatic and painful to the patient over time.

She was subsequently referred again to the plastic surgery clinic in August 2018. By then, the patient has had repeated percutaneous aspirations of the seroma cavity carried out 4- to 6-weekly over a period of 6 years. This also inflicted psychological trauma for the patient, having to regularly attend to the breast care centre for all these years. The overlying skin was thin, with tight scar and radiotherapy damage. A moderate degree of muscular atrophy of the shoulder girdle gradually manifested. A clinically palpable loculated seroma on the left side was noted. She had limited ROM of the left shoulder, associated with subjective neuropathic pain along the arm and down the forearm, as well as positive Tinel’s sign over the left axilla. At this point, her BMI became 28.5 and she remained nonsmoker. The senior author (GAA), offered her an excision of the scar and seroma cavity and importing vascularised tissue (MS-LD flap) to the chest wall. A lengthy discussion about the various options of breast reconstruction took place to which the patient declined. She was clear she was happy with the flat chest, provided that this extremely stressful recurrent seroma is addressed.

The procedure was performed in May 2019 (Figure 1), under general anaesthesia with the patient placed in a left lateral position. Prophylactic antibiotics and one gram of tranexamic acid were given at induction. An encapsulated seroma was resected en-bloc with the overlying mastectomy scar. This was stuck to the lateral aspect of pectoralis major muscle (Figure 2). It extended into the intermuscular plane between pectoralis major and minor and into the axilla. Interestingly, several visible feeding lymphatic vessels (Figure 3A,B) were noted and were meticulously ligated with a 5-o prolene suture, in the event further lymphatic surgery might be required in the future. Also, neurolysis of a sensory nerve, likely the intercosto-brachial nerve, entangled in the scar tissue, was performed (Figure 4). The capsule and the fluid were sent off for analysis. The capsule was negative for ALCL (anaplastic large cell lymphoma) and microscopically demonstrated a pseudocystic lesion with a wall composed of collagenous fibrous tissue with no obvious lining. A mild chronic inflammatory infiltrate was present. The seroma fluid samples indicated similar reactive lymphoid cells and macrophages. Washout with warm saline and haemostasis followed.

Figure 1 Timeline of the management of chronic recurrent chest wall and axillary seroma. 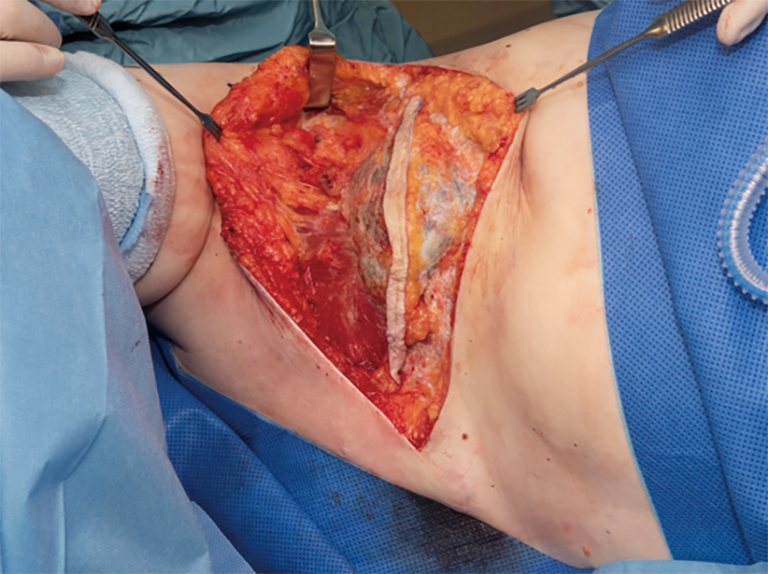 Figure 3 Timeline of the management of the encapsulated seroma. (A) Feeding lymphatic vessels identified with an identifiable connection to the seroma capsule; (B) a close-up of the lymphatic vessels which were subsequently ligated. 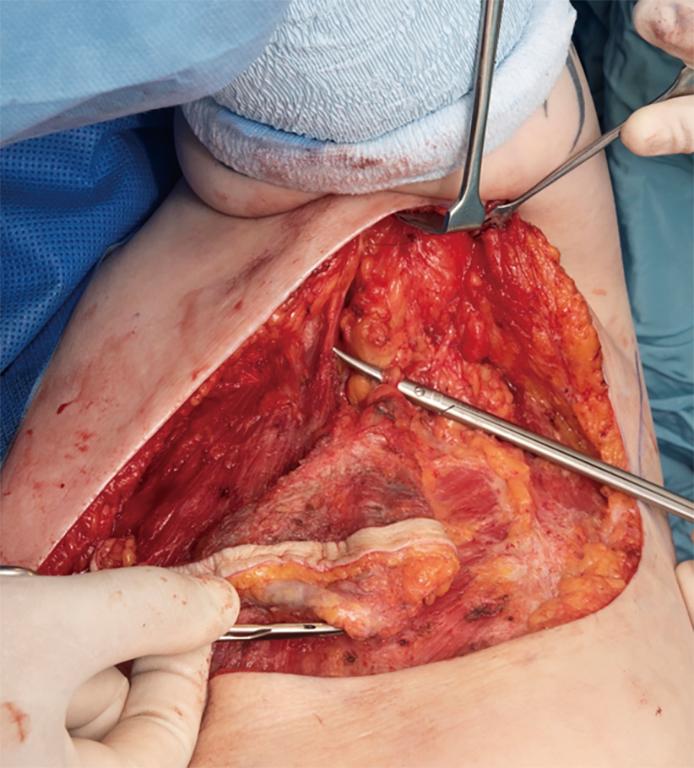 The dead space was subsequently closed with a muscle-sparing latissimus dorsi-type II (MS-II LD) flap according to the classification described by Hamdi et al. (5). This is a variant of the thoraco-dorsal artery perforator flap (TDAP), with a 5 cm cuff of muscle included around the perforators, based on the descending branch of the thoracodorsal artery (Figure 5). This preserved the nerve supply and the remainder of the vascular network to the muscle. The elliptical skin paddle of the MS-II LD flap was inset in the chest wall (Figure 6). A low-pressure suction drain (14 Fr) was placed in the chest wall and another one in the MS II-LD donor site. The skin was closed in layered fashion with 3-o Monocryl. The Scarpa’s fascia in the donor site of the back was re-approximated with barbed 2-o polydioxanone (PDO) suture. The skin was closed in layers with 3-o Monocryl and dressed with glue and micropore tape. She had an uneventful hospital stay and was discharged home on the third day post-operatively, after removal of the drains. She had an uneventful recovery, with no adverse or unanticipated events. Two months following surgery, there were no signs of collections or seroma (Figure 7). The same findings were noted on follow-up 10 months postoperatively. The patient reported significant improvement with movement-related paraesthesia. Disuse atrophy of the shoulder girdle musculature was noted, as a consequence of the chronic functional impairment. However, there was complete resolution of her shoulder pain and her active shoulder abduction range was significantly improved. The patient felt quite relieved that she did not need to go back to the breast care centre any more. 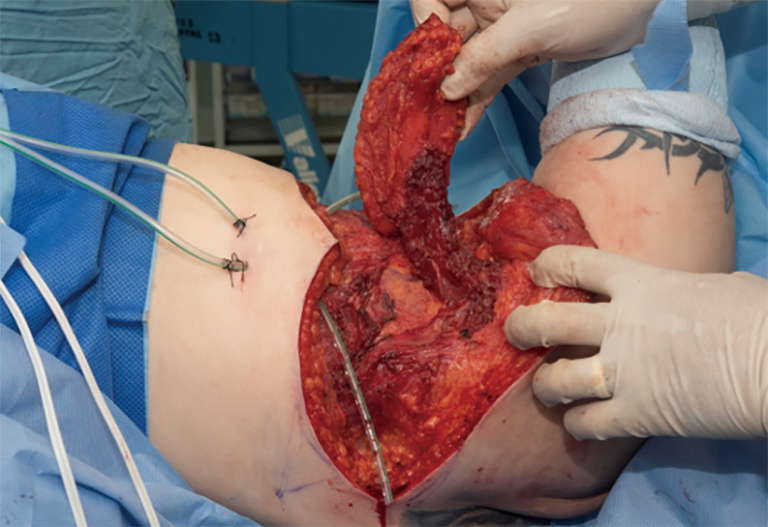 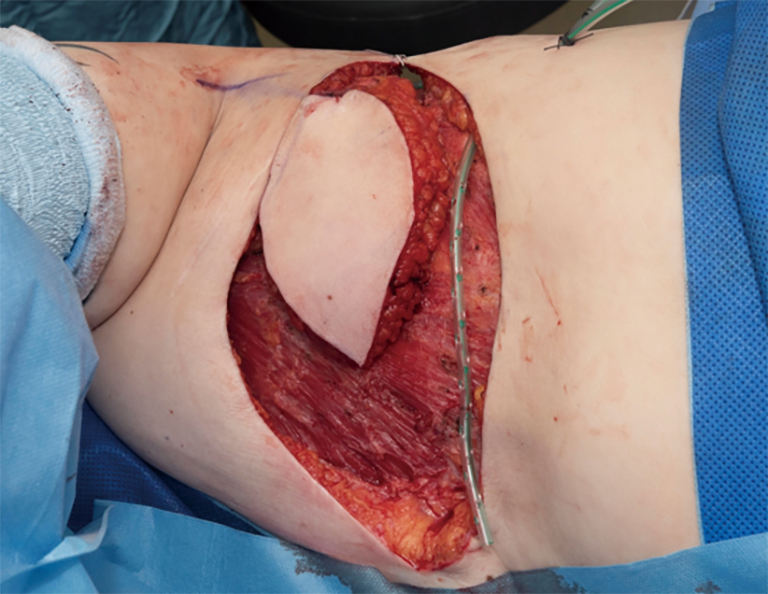 Figure 6 MS-LD II flap is mobilised into the defect left following the excision of the seroma capsule and the skin paddle is inset. 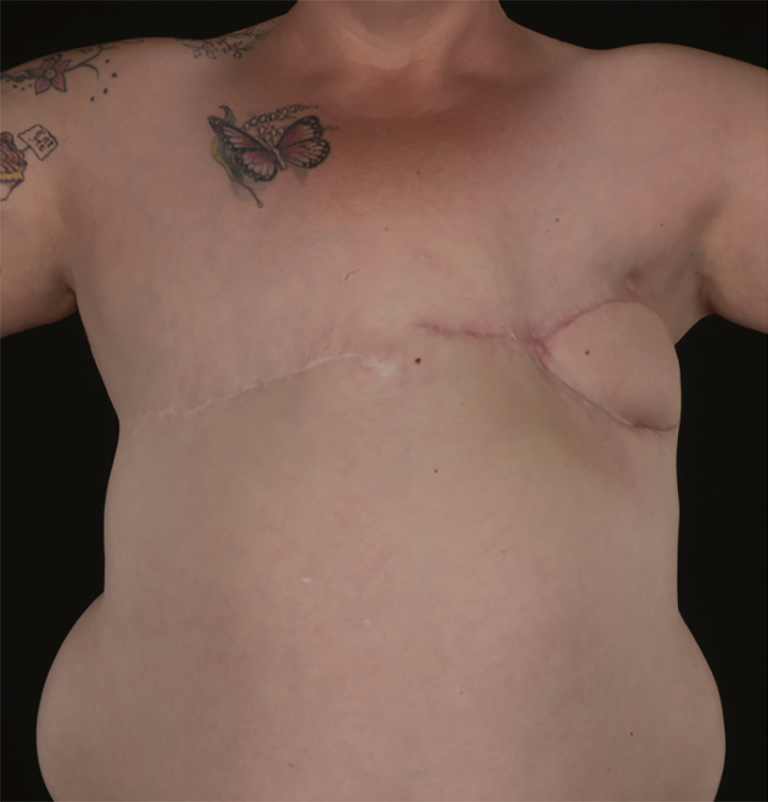 Figure 7 A healed wound with no recurrence of seroma.

Patients with chronic seroma have a high disease burden. Several methods for treating complicated seromas have been tested over the years and include sclerotherapy with agents such as talc, tetracycline and hypertonic saline; intracavity steroid injections, and minimally invasive evacuation, or combination therapy (6-9). While this may be effective in treating most cases, some remain refractory to conservative therapy as demonstrated by our case study and progress into chronic encapsulated seroma.

Axillary dissection is a strong risk factor for seroma formation as blood and lymphatic vessels are more likely to be damaged compared to mastectomy and breast conserving therapies (10). The axillary clearance together with the radiotherapy treatment this patient received is likely to have contributed to the inflammation and fibrosis; and thereby perpetuating the disease process.

The pathophysiology of seroma formation remains unclear; which renders targeted therapy challenging. Several authors have suggested lymphatic processes as a contributing factor with inflammatory and fibrinolytic reactions as the catalyst for the ongoing process (1,11-13). Compositions of seroma fluid have been studied suggesting it is an exudate generated in the initial phase of healing. Raised vascular endothelial grow factor (VEGF) and decreased endostatin is linked to the driving force behind angiogenesis and the inflammatory process following operative trauma (14). The prolongation and heightened intensity of this process is what leads to seroma formation. In our case, we were able to identify several feeding lymphatic vessels which may explain the refractory nature of the seroma to percutaneous aspirations and the gradual evolution of a pseudocapsule that complicates further management.

Extensive dissection, irregularity of the chest wall and axillary fossa, movement due respiration and the shoulder girdle hamper mastectomy flap adherence and provide the perfect environment for the formation of a dead space which fills with seroma fluid (2). Once a fibrous capsule develops, the seroma should better be removed, with excision of the capsule and closure of the subsequent dead space.

Surgical intervention for chronic recurrent seroma has been described in a few case reports (1,15,16). Vascularised tissue, such as TDAP or MS-LD flap should be considered in cases where the volume of dead space is significant and the overlying skin envelope is thin, deficient and damaged by radiotherapy treatment. A traditional LD flap as illustrated in van Bastelaar et al. (16), is a sound option, that carries the known potential complications of harvesting a LD muscle. In our experience and in this case, a muscle-sparing technique is chosen, whenever feasible, due to its advantage of minimising shoulder weakness and dysfunction, as well as significantly reducing the incidence of post-operative seroma and wound healing complications (17,18). When we are unable to identify a medium to large TDAP perforator, a small (1–5 cm) cuff of LD muscle is included with the perforator(s), described as a MS-I/II LD flap (5).

We do appreciate that this case report represents a level V evidence, but still it is helpful for reference when surgeons face similar cases. We could not follow the patient up more than 10 months, as she was not keen to attend to hospitals any longer, which is understood owing to her regular attendance over the previous few years for her mastectomies and the chronic recurrent seroma. Before this procedure we performed, she has only been having aspiration of seroma and compression therapy, so no other modalities have been tried.

Surgical intervention should be considered in chronic refractory seroma. Vascularised tissue is recommended in cases where the volume of dead space is significant, the overlying skin is thin or affected by radiotherapy changes and/or direct closure would be under tension. Resection of the fibrous capsule, meticulous haemostasis/lymphostasis, and reconstruction of the defect with a MS-LD is an effective solution, with very low donor site morbidity.

Conflicts of Interest: Both authors have completed the ICMJE uniform disclosure form (available at http://dx.doi.org/10.21037/abs-19-71a). The authors have no conflicts of interest to declare.

Ethical Statement: The authors are accountable for all aspects of the work in ensuring that questions related to the accuracy or integrity of any part of the work are appropriately investigated and resolved. The study was conducted in accordance with the Declaration of Helsinki (as revised in 2013). Written informed consent was obtained from the patient for publication of this Case Report and any accompanying images. A copy of the written consent is available for review by the Editor-in-Chief of this journal.