Nipple adenoma: a review of the literature

They most commonly present as a smooth nodule on the nipple however nipple discharge, hyperkeratosis, deformity, ulceration and erosion have also all been described. A clinical diagnosis can be challenging and histological confirmation is essential to exclude other differentials such as Paget’s disease of the nipple or carcinoma (2-4).

The lesion most commonly presents in females in their fourth decade of life but has been reported in men, adolescents and infants (5-7). NA are relatively small in size, ranging from 0.5–3.5 cm (8). They are benign lesions that can locally infiltrate smooth muscle and nerves within the nipple stroma, but do not metastasise. Much of the literature regarding NA consists solely of case-reports and case-series (Table 1). 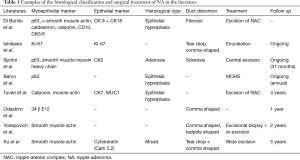 NA are uncommon and most breast units can expect to see approximately one adenoma per year (3,9,10). NA tend to occur on one side only, however, a case of bilateral disease has been reported (10,11).

Most NA present with a palpable lesion with some degree of nipple distortion with or without crusting, erythema, thickening, itching, inflammation, ulceration, discharge, and pain (12). In one case-series, 83% of patients were symptomatic from the NA with nipple discharge being the most prevalent symptom (58.3%) and is commonly serous or sanguineous (9,13).

Duration of symptoms is highly variable and can extend from months to several years. NA may erode through the nipple epidermis which can give an appearance identical to Paget’s disease of the nipple, ductal carcinoma in situ or invasive ductal carcinoma (12,13) (Figure 1).

Proliferation of the lactiferous ducts of the nipple is the most characteristic finding in NA. Ducts are characteristically lined by double layers of myoepithelial and epithelial cells and are often described as being tear-drop or comma shaped due to duct distortion as result of cellular growth, fibrosis and sclerosis (2,3,14).

The presence of a dual cell layer is the main histological characteristic that helps distinguish NA from invasive or in situ disease.

Three main histological phenotypes of NA are recognised and all three types can exist within the same NA as a mixed form. Epithelial hyperplasia type: significant duct hyperplasia is present, often in recognised patterns such as tubular, solid, papillary and pseudo-cribiform. Necrosis may be present (10,15).

Adenosis type: the NA is present within the dermis and has clear margins. Glandular ducts contain two types of cell, epithelium and myoepithelium. Pseudo-infiltrating or pseudo-invasive type: infiltrative pattern with distorted ducts and squamous cysts with no epithelial hyperplasia (4,16).

Immunohistochemical analysis should be performed on all specimens for specific markers associated with myoepithelium. Many cell markers have been described in the literature to identify NA: α-smooth muscle actin, smooth muscle myosin heavy chain, calpronin, CD10, p63 and CK5/6. The presence of two markers is sufficient for diagnosis, with p63 and CK5/6 being the most common and specific (2-4,13,18).

NA can be mis-diagnosed as ductal carcinoma due to the presence of sclerosis, necrosis and a pseudo-invasive appearance on histology due to fibrosis (18). A lack of myoepithelial cells within the specimen and/or positive staining for malignant cell markers e.g., c-erbB-2, p53, Ki-67, HER2 and hormone receptors (ER/PR) can help distinguish NA from malignant disease (4,8,19) (Figure 2).

All mainstream breast imaging modalities such as ultrasound (USS), mammography and magnetic resonance imaging (MRI) have and can be used to help diagnose and characterise NA. USS remains the most clinically useful imaging modality as it can help define soft tissue nodularity, assess internal vascularity and also allows image-guided FNA. The lesion is often well defined and hypoechoic on USS and may demonstrate posterior echo enhancement (2,4,19).

The use of MRI to aid diagnosis of NA has been reported in the literature in several case-reports. The MRI enhancement-curve for NA is similar to malignancy in that NA tend to demonstrate rapid uptake with a peak of 60–90 secs followed by washout and for this reason, may not be helpful in diagnosis (20,21). Within the literature, the majority of cases were imaged with USS and mammography only (12,14,18,22,23).

Mammography gives heterogeneous results that can range from normal or unspecific changes e.g., benign calcification to a dense lesion with well-defined or irregular margins (22). Due to the heterogenicity of findings that can be demonstrated, no one imaging modality should be used in isolation for the diagnosis of NA.

Surgical excision is the only treatment for NA and many surgical techniques have been described in the literature (Table 1). NA often re-occur if incompletely excised but reoccurrence is rare following complete excision (5,8,17,18).

Some authors advocate complete excision of the nipple to ensure clear margins, whilst others perform a more radical central breast excision (8,13,24). In these cases, the patients who are often young, will require further surgery to reconstruct the nipple and report low satisfaction and poor cosmesis.

Nipple preserving techniques (wedge resection, enucleation, MOHS micrographic surgery, cryosurgery) have been shown to be just as effective in terms or re-occurrence but are dependent on the size of the NA and its position within the nipple (2,4,10,11,16). As NA often occurs within the dermis, complete resection of the nipple may be required to avoid reoccurrence. Recurrence rates have been reported to be as high as 25–55% following incomplete excision (12) (Table 1).

In a case-series of five patients with breast cancer, NA was present and in three of the cases, investigation of symptoms from the NA led to diagnosis of clinically-occult invasive disease (26). Finally, in a case-series of 12 patients with NA, at 3 years follow up post excision, three patients (25%) had been diagnosed with breast cancer prior to or post diagnosis of a nipple adenoma (10).

Due to the high prevalence of breast cancer and the low prevalence of NA, a causal link has not been demonstrated between the two. Indeed, malignant transformation has been documented only once in the literature and remains a very rare occurrence (27). The presence of a NA should heighten the suspicion of a co-existent breast cancer and all patients should be appropriately screened with triple-assessment prior to definitive treatment for the NA.

No formal consensus exists for how long patients should be monitored following adenoma excision and remains at the discretion of the operating surgeon and the histological evaluation of margins. If negative margins are achieved, re-occurrence is rare.

In their study of patients with negative margins, Suster et al. found no evidence of recurrence in patients at 6 years follow up (28). In many of the case series and reports in the literature, authors report that many patients post adenoma excision remain under active monitoring. Local recurrence rates of nipple adenoma following excision with positive margins are high with time to re-occurrence ranging from 1.5–4 years.

The authors suggest a follow-up policy on a patient by patient basis centred around a discussion within the whole breast multi-disciplinary team. Patients with negative margins, no re-occurrence at one year and low risk for breast malignancy could be discharged to patient-initiated follow up (PIFU) for example. Patients with NA and a family or personal history of breast disease that raises the risk of breast cancer (e.g., indeterminate B3 lesions, moderate to high risk family’s) a period of radiological and clinical follow up seems appropriate. Patients with a high risk of NA re-occurrence (positive margins and refusal for further excision, previous NA re-occurrence) again my benefit from a PIFU policy. In all patients, education regarding regular breast self-examination, attendance at screening and the importance of reporting new or changing breast symptoms remains essential (8,22,26,29).

NA are rare benign lesions that can behave in a locally invasive manner. They do not metastasise. Accurate histological and immunohistochemical analysis is essential to help delineate pseudo-invasion, a common finding in NA, from invasive carcinoma. Treatment is with surgical excision and fully excised lesions rarely re-occur. The nipple can be spared safely in selected patients. We recommend a follow up policy on a case by case basis with involvement of the MDT for these rare breast lesions.