Women facing a breast cancer diagnosis or the decisions surrounding a prophylactic procedure due to high risk of breast cancer have multiple factors to consider in regard to treatment. The decision to have a simple mastectomy or a direct to implant breast reconstruction would be based on expected cosmetic and functional results, oncologic safety as well as risk of complications. Furthermore, the risk of additional procedures in order to achieve a satisfying cosmetic result might be a substantial consideration for the patient.

Corrective surgeries following mastectomy and immediate breast reconstruction includes release and removal of scar tissue, change of implant size, shape or profile due to asymmetry of volume, displacement of implant, rippling, capsular formation, breast animation or correction of the contralateral natural breast. The number and degree of reoperations is a decision made by the patient and the surgeon in collaboration. It depends, however, on an individual balance between the patients wish for optimal cosmetic result and the amount of effort the woman is willing to offer.

We present the following article in accordance with the STROBE reporting checklist (available at http://dx.doi.org/10.21037/abs-20-63).

A retrospective review of patients who underwent either therapeutic or prophylactic mastectomy and direct to implant reconstruction by the same senior surgeon during January 1st 2014 and December 31st 2017 at the Department of Plastic Surgery, Odense University Hospital was undertaken. Of the 122 identified patients, 67 patients had received a therapeutic mastectomy and 55 had received a prophylactic mastectomy. Patients were defined as cancer patients if at any point cancer was detected in either breast. Prophylactic patients were never diagnosed with breast cancer. Both prophylactic and cancer patients underwent the same mastectomy technique with hydro dissection and careful dissection of the mastectomy skin flaps when primary reconstruction was planned. Our surgical group uses a combination of pre-operative and operative techniques to minimize reoperations. All patients are carefully measured, and a breast footprint is drawn before surgery. The footprint is used in surgery along with skin flap thickness to evaluate the suitable implant size. Atraumatic dissection technique with hydro dissection and scissor reduce trauma and helps maintain good perfusion, ultimately minimizing reoperations.

Primary outcome was number of corrective surgeries for the two different groups of women. Secondary outcomes were indication and types of corrective surgeries the women underwent. Additionally, data on possible confounders as age, body mass index (BMI), smoking, hypertension, diabetes and other comorbidities, data related to surgical procedures including implant size, shape and placement, surgical procedure and the number of hospitalization days following the procedure were obtained from medical charts.

Patients were followed from date of surgery until the 1st of October 2018. In this period, all corrective surgery occurring after the primary surgery was registered. Nipple reconstruction and tattooing of the areola was omitted. The end point of this reconstructive process for any individual woman was a decision made between the woman and the single senior surgeon.

Chi-square and Fisher’s exact test were used to compare the proportion of women experiencing corrective surgeries in the prophylactic group compared to the therapeutic group as well as the proportion of patients with comorbidities.

To explore if there was a significant difference in the number of corrective surgeries between the two groups, we first applied negative binomial regression, and, as the result showed no signs of overdispersion, we then applied Poisson regression for a more accurate result.

Baseline characteristics were presented for the 122 women. Student’s t-test and Fisher’s exact test were used to examine differences in age and BMI between groups.

The study was approved by the Danish Patient Safety Authority (3-3013-2117/1) and The Danish Data Protection Agency (17/15192). The study was conducted in accordance with the declaration of Helsinki (as revised in 2013) and informed consent was taken from all the patients.

Patient characteristics are presented in Table 1. There was a significant difference in age between the prophylactic and the therapeutically treated women; 39.7 years compared to 50.1 years (P<0.001). There was a significant larger percentage of patients with hypertension in the therapeutic group 9/67 (13%) compared to the prophylactic group 0/55 (0%) (P=0.004). 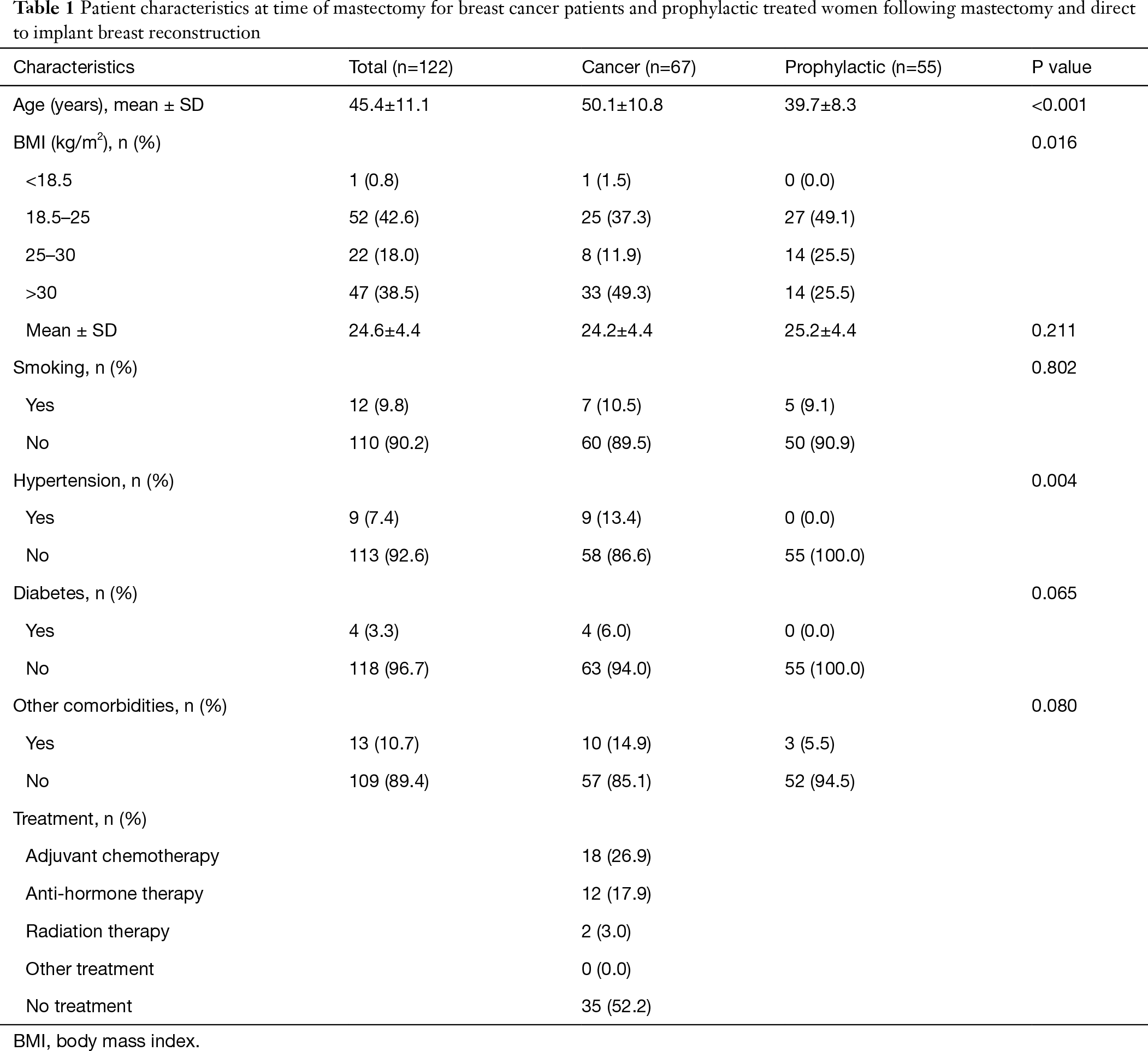 In both groups, patients were discharged on average 3.8 days after surgery. The implant size was larger in the prophylactic group (440 cc) compared to the cancer group (363 cc) (P=0.002). No difference was found between the two groups regarding implant placement or shape of the implant. Subpectoral placement was chosen in most cases (88%), as was anatomical shape (97%) (Table 2). Most implants were microtextured. Forty percent of all patients had nipple-sparing mastectomy and 61% had skin-sparing mastectomy (P<0.001). Figures 1,2 shows a therapeutic and prophylactic patient after bilateral mastectomy, one with the removal of nipple-areola-complex and one with only removal of the nipple. The prophylactic patient was corrected once. 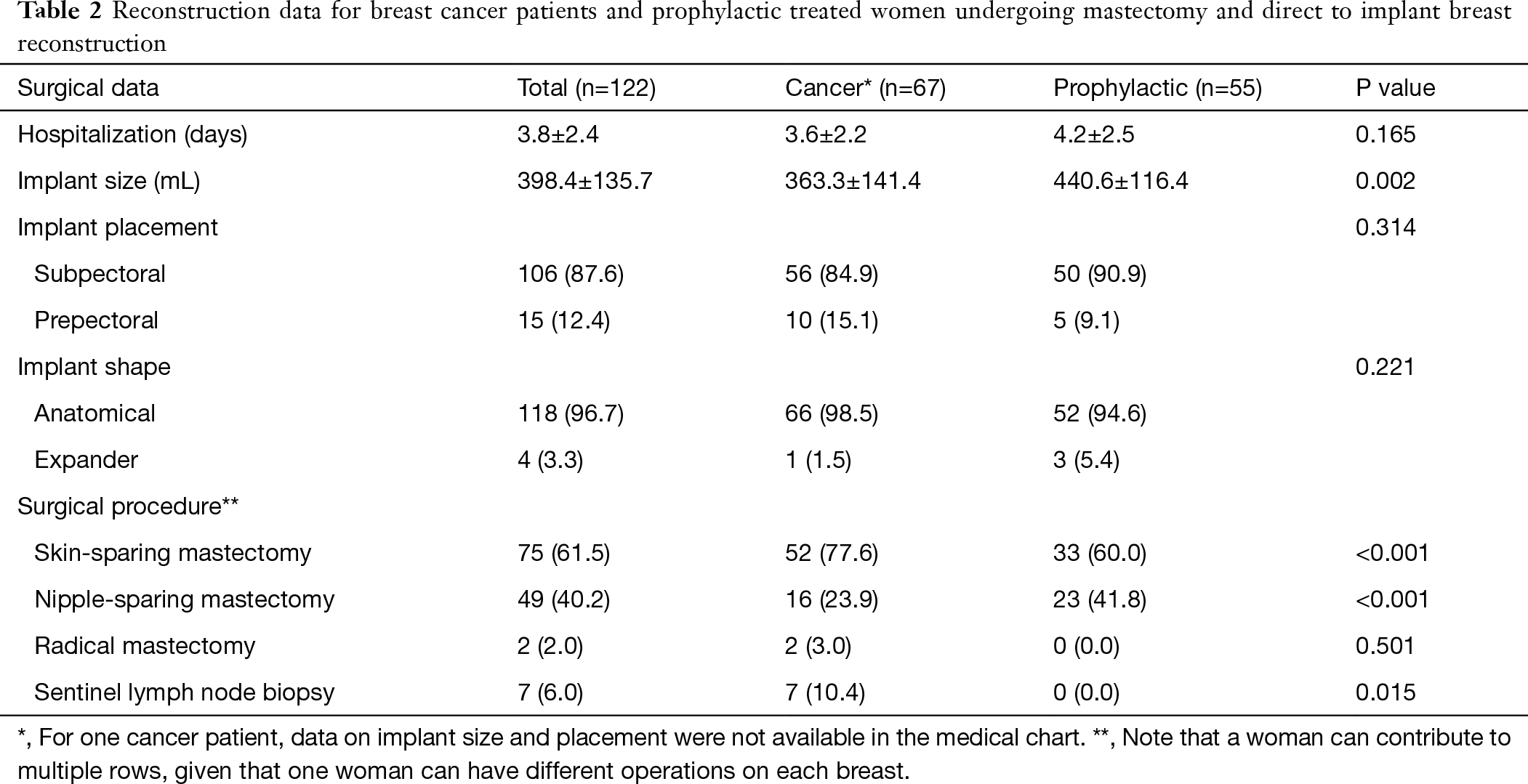 Figure 1 Woman with BRCA mutation diagnosed with breast cancer in the age of 62. Chose to have bilateral mastectomy including removal of nipple areola complex and primary breast reconstruction with implants. The woman had no further wish for correction or reconstruction of the nipple-areola-complex.

Figure 2 Thirty-five-year-old woman with known BRCA mutation. After giving birth to two children chose to have prophylactic bilateral mastectomy and primary breast reconstruction. The nipple but not the areola was included in the mastectomy due to the patients wish. Due to rotation of anatomic implants she was corrected once and now have round implants. 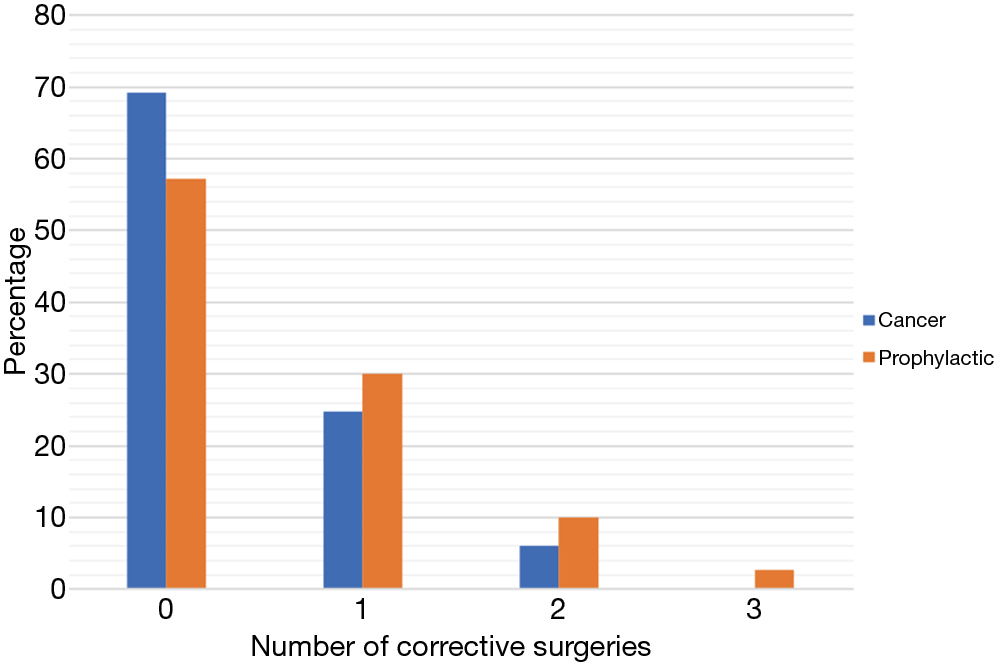 We calculated the frequency of each corrective surgery indication, as classified in the method section. In the therapeutic group the dominant indication for corrective surgery was asymmetry (53%), followed by thin skin flaps/visible implant (18%) and correction of the natural contralateral breast (10%). In the prophylactic treated women thin skin flaps/visible implant (49%) was the dominant indication, followed by asymmetry in size (23%) and wrong shape of implant (22%). The result is illustrated in Figure 4. 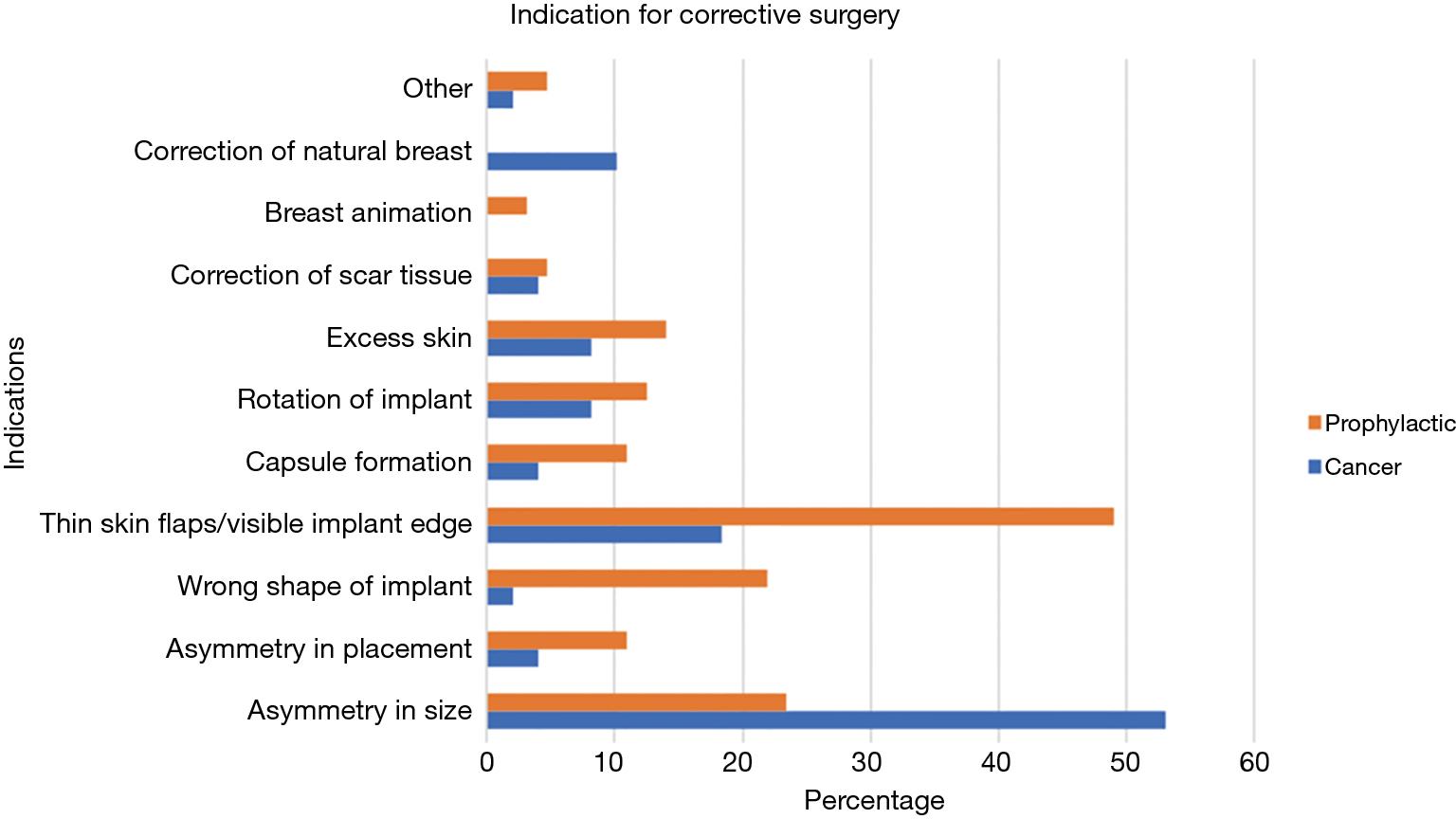 The demographics in our study group differed in age, BMI and prevalence of hypertension. Both BMI and hypertension are correlated to age and the increased number of these in the cancer group can probably be explained by the age difference among the groups. This age difference was expected, given that the group of women with prophylactic risk reducing surgery often choose this at a young age. The cancer group consist of two subgroups: (I) a larger group of older women with sporadic occurrence of breast cancer. The average age will follow the age standardized rate ratios with peak incidence between 50–70 years of age (8). And (II) a smaller group of women with genetic risk of breast cancer, unrecognized until the occurrence of their first cancer. This smaller group will probably resemble the prophylactic treated women and tend to lower the mean BMI and hypertension among the cancer patients.

To the best of our knowledge only one other study has presented number of corrective surgeries following single stage breast reconstruction and stratified into prophylactic and therapeutic mastectomy (9). Nurudeen et al. included 28 women reconstructed with single stage implant breast reconstruction. They found that 9/28 (32%) women undergoing risk reduction mastectomy had no additional surgery, while four, seven and five women had one, two and three additional surgeries, respectively. For women undergoing therapeutic mastectomies 8/10 (80%) had no additional surgeries while two women had one additional revision surgery. Although these data are very limited, it is in line with our results.

Our study sample consisted of 67 patients with breast cancer and 55 patients with genetic disposition for breast cancer. Both groups received the same surgical treatment, by the same surgeon and the same follow-up with the same offer of corrective surgery. The time leading up to the treatment was very different for the two groups. The psychological concerns and physical distress following a cancer diagnosis and treatment is only prominent in one of our study groups. Many of the cancer patients are additionally facing chemotherapy, axillary lymph node staging and anti-hormone treatment. One could hypothesize that all these procedures prior to mastectomy and breast reconstruction might influence the choice to have more elective surgery following treatment. It is also possible that the patients in the cancer group are more easily satisfied with the result and have lower expectations concerning aesthetic outcome. Studies support this hypothesis by defining a response shift in women with a breast cancer diagnosis. After a diagnosis of breast cancer, women frequently report a change in their priorities, how they look at life, and what they value. As a result, factors that used to cause dissatisfaction may no longer do so (13,14). This response shift could contribute to higher levels of satisfaction reported in women with breast cancer compared to women treated prophylactically. Other studies have also shown that women with breast cancer have no explicit expectations regarding surgery because their focus at that time was on surviving cancer rather than on reconstruction (3). The patients in the prophylactic group have never experienced breast cancer or the treatment associated with it. Not having the same psychological burden as a patient with breast cancer, might lead to more concerns about the aesthetic outcome and more willingness to undergo corrective surgery.

Patients choosing corrective surgery, do so because the aesthetic outcome of the reconstruction does not match their expectations or needs. Studies have shown that appearance is a key factor for women when deciding if reconstruction was better or worse than expected (13,15-17). Some appearance-related concerns or dissatisfaction with the aesthetic outcome can be mended with corrective surgery, but some of these concerns could possibly have been prevented with better information and expectation management prior to surgery. Studies have shown that appearance-related concerns reported by women suggest that they did not fully understand how different their reconstructed breast might look or feel, particularly after implant-based reconstruction (15). This study further implicates the need for thorough patient information and managing expectations before surgery, especially in those patients receiving prophylactic mastectomy and reconstruction, since they receive a higher number of corrective surgeries. Detailed education of this group, where fast decision is not needed, will allow patients to better shape their expectations. Patients need to be advised of the frequent need for additional surgery. Around every second women will need additional surgery and multiple surgeries are not unusual.

Direct to implant breast reconstruction are frequently followed by one or multiple additional corrective surgeries among breast cancer patients and certainly among women treated with risk reducing mastectomy. It is of great importance to discuss this with the patient prior to surgery in order to create realistically balanced expectations. The range of aesthetic outcomes, risk of complications, the potential need for corrective surgery and the different types of possible corrective surgery should be included.

Reporting Checklist: The authors have completed the STROBE reporting checklist. Available at http://dx.doi.org/10.21037/abs-20-63

Conflicts of Interest: All authors have completed the ICMJE uniform disclosure form (available at http://dx.doi.org/10.21037/abs-20-63). The authors have no conflicts of interest to declare.

Ethical Statement: The authors are accountable for all aspects of the work in ensuring that questions related to the accuracy or integrity of any part of the work are appropriately investigated and resolved. The study was approved by the Danish Patient Safety Authority (3-3013-2117/1) and The Danish Data Protection Agency (17/15192). The study was conducted in accordance with the declaration of Helsinki (as revised in 2013) and informed consent was taken from all the patients.