Adjuvant endocrine therapy has been shown to improve oncological outcomes in women with oestrogen receptor (ER)-positive early breast cancer. In recent years, aromatase inhibitors (AIs) (1,2) have largely replaced tamoxifen as the gold standard adjuvant treatment of choice in post-menopausal women with breast cancer, resulting in a near-complete deprivation of oestrogen.

AIs predispose women to accelerated bone mineral density (BMD) loss induced by oestrogen depletion, resulting in a 2-fold increased fracture risk compared to those with physiological post-menopausal bone loss (3). In the event of extended adjuvant AI treatment, there is a marked incidence of osteoporosis even with the use of antiresorptive agents such as bisphosphonates (4). It is important that patients with early breast cancer being considered for endocrine therapy receive appropriate evaluation of bone health. Detection, prevention, and treatment of bone loss in postmenopausal patients with breast cancer has been extensively studied. We have previously reported that baseline vitamin D and parathyroid hormone (PTH) measurement in patients with breast cancer, identifies secondary causes of low BMD in a substantial proportion of patients (5).

Several guidelines exist for both the evaluation and management of bone health for women with early breast cancer, including the National Osteoporosis Foundation (6), the American Society of Clinical Oncology (ASCO) guidelines (7), European Menopause and Andropause Society (EMAS) position statement (8), European Society for Medical Oncology (ESMO) guidelines (9), European Panel guidelines (10), joint position statement of the IOF/CABS/ECTS/IEG/ESCEO/IMS/SIOG (11) and the National Comprehensive Cancer Network (NCCN) Task Force Report (12). Of these, the EMAS and ESMO guidelines suggest the use of PTH in evaluating fracture risk assessment (FRAX). Baseline PTH assessment, and indeed vitamin D, is not recommended in the NCCN guidelines, with the World Health Organisation FRAX tool being favoured instead. All these guidelines suggest the use of a baseline dual-energy X-ray absorptiometry (DXA) scan, and deem the T-score at which antiresorptive therapy should be initiated to be <–2.0. There is uncertainty regarding the duration of antiresorptive treatment during endocrine therapy.

The variation in these guidelines suggest there is still a gap in the evidence relating to the work-up of patients with breast cancer due to start an AI. In this retrospective study, we aimed to correlate serum PTH levels with baseline bone health, and evaluate its clinical utility in predicting individuals on endocrine therapy who are at increased risk of AI-associated bone loss compared to the standard variables of baseline BMD, calcium and vitamin D.

This retrospective analysis and subsequent manuscript preparation is performed as closely as possible to the STROBE checklist. Women diagnosed with non-metastatic hormone receptor-positive breast cancer and started on endocrine therapy between August 2007 and June 2012 at the Royal Melbourne Hospital, Melbourne, Australia and from the private practice of the service director (GBM) were evaluated. Inclusion criteria were age of 50 years or more at the time of diagnosis, DXA scan and pathology test results available at baseline (within 6 months of starting endocrine therapy), and undergoing at least one follow-up DXA scan whilst on endocrine treatment. Patients in the AI group were taking either anastrozole or letrozole. Patients’ laboratory data were obtained from electronic medical records. The study was conducted in accordance with the Declaration of Helsinki (as revised in 2013). The study was approved to be conducted as a quality assurance project under the guidelines of the Human Research Ethics Committee (HREC) of the Royal Melbourne Hospital. Informed consent was waived, as the aim of the project was to review outcomes of treatment to inform future practice, and all information will be protected.

Serum calcium, albumin, PTH and 25-hydroxyvitamin D (vitamin D) were collected. Corrected calcium was calculated. The blood tests closest to initiation of endocrine therapy were utilized in analysis. Similarly, to enable assessment of changes in BMD, the DXA scan completed closest in time to initiation of endocrine therapy was considered the baseline scan and had to be within 6 months of starting endocrine therapy. The last DXA scan completed prior to ceasing endocrine therapy was considered as the final follow-up DXA. In keeping with previous work (5), the femoral neck T-score (FnTs) was used as a marker of overall BMD. Given the varying lengths of time between baseline and follow-up DXA among cohort patients, a standardised approach to assess change in BMD was used by calculating the change in FnTs (ΔFnTs) per year was calculated [(FnTsfinal – FnTsbaseline)/years]. Similarly, a percentage change in total hip BMD was calculated, for comparative purposes to published literature. Baseline FnTs was used to stratify patients as normal (>–1), osteopaenic (≤–1 to >–2.5) and osteoporotic (≤–2.5). Data on calcium/vitamin D/anti-resorptive medication use was not available.

Statistical analyses were performed using SPSS (v20; SPSS, Chicago, IL, USA). Linear regression analyses were utilised to determine the association between two or more continuous variables, and a t-test/ANOVA for normally-distributed continuous data against categorical grouping variables. For all analyses, the significant level was set at P<0.05. Data are presented as mean; 95% CI of the mean.

Baseline PTH, but not vitamin D and corrected calcium, correlates with baseline BMD

Table 2 Linear regression analysis of the relationship between FnTs and age, serum PTH, and vitamin D and corrected calcium at baseline
Full table 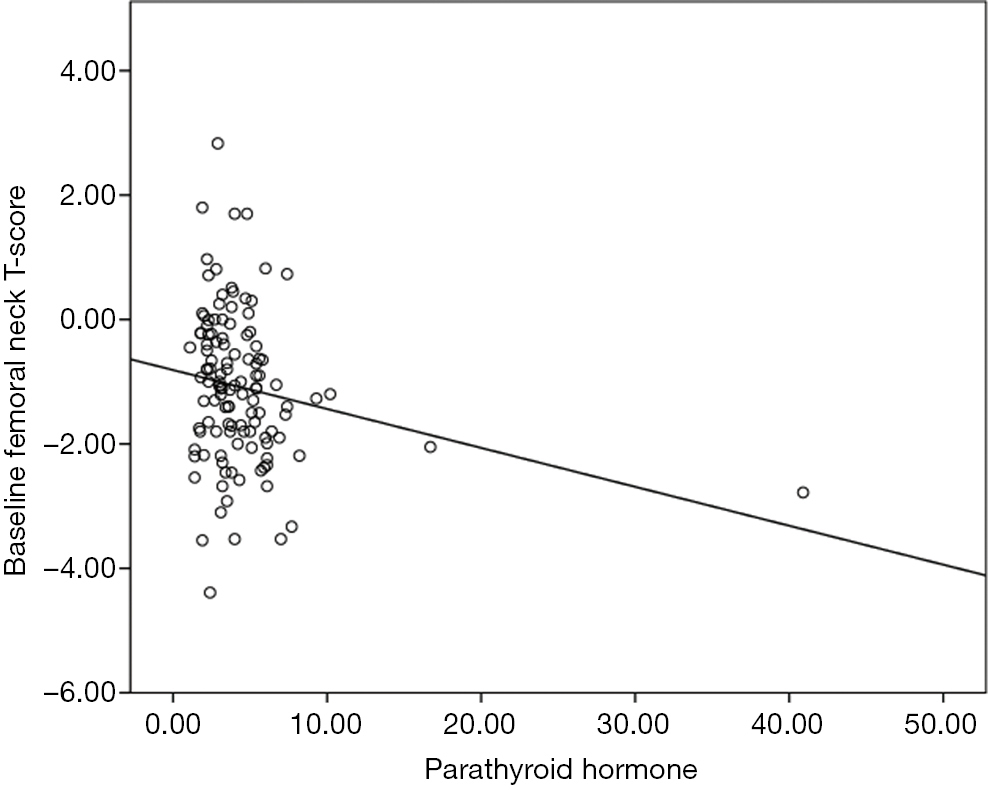 Modality of endocrine therapy, and baseline BMD, but not baseline PTH and vitamin D status, predicts change in BMD 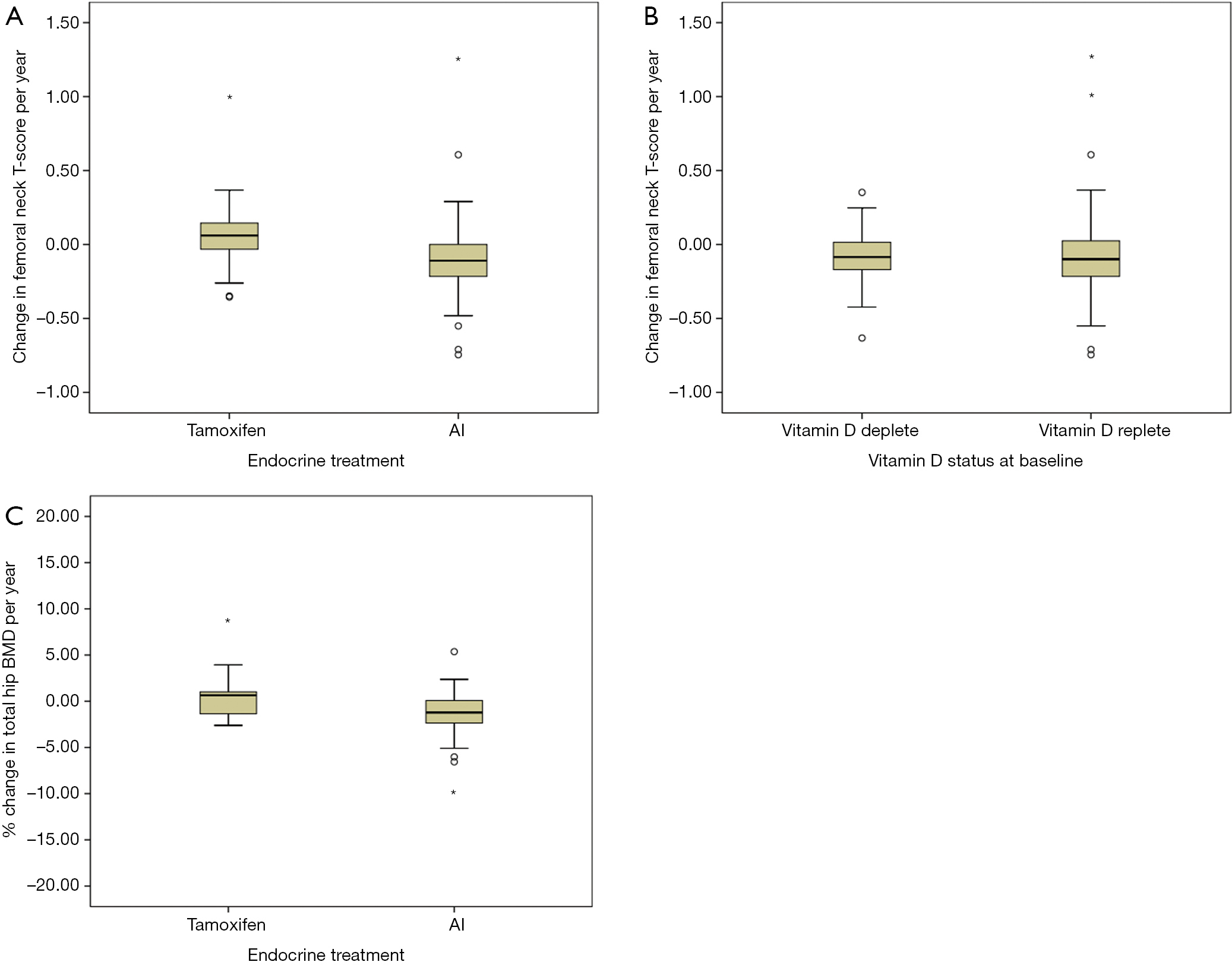 We compared the changes in BMD based on the baseline BMD, as per the baseline FnTs (normal >–1, osteopaenic ≤–1 to >–2.5 and osteoporotic ≤–2.5). Irrespective of modality of endocrine treatment, patients with normal baseline FnTs (n=58) had a higher decrease in ΔFnTs per year of –0.15; –0.20 to –0.10, compared to patients who were osteopaenic at baseline (n=62); –0.03; –0.11 to +0.05, and osteoporotic at baseline (n=12); –0.01; –0.16 to +0.14 (P=0.02) (see Figure 3A). Hence, patients with normal FnTs as baseline had a significantly higher rate of loss of femoral neck bone density. Data on calcium/vitamin D/anti-resorptive medication used by these patients was not available, and hence not analysed as a confounding variable. Indeed there is evidence that both calcium and vitamin D supplementation does not have a considerable effect on BMD, and therefore this was not pursued (14).

We hypothesized that baseline PTH might identify a group of patients at risk of significant BMD loss while taking AI. However, in patients taking AI and excluding those with an identified parathyroid pathology, the baseline PTH did not predict ΔFnTs. Patients with normal PTH (<5.90, n=78) had a ΔFnTs of –0.11; –0.17 to +0.05, compared to those that had a high PTH (n=12); –0.11; –0.18 to –0.04 (see Figure 4) (P=0.994). Linear regression analysis showed no significant association between baseline PTH and ΔFnTs (data not shown). This was the same for percentage change in total hip BMD (data not shown). 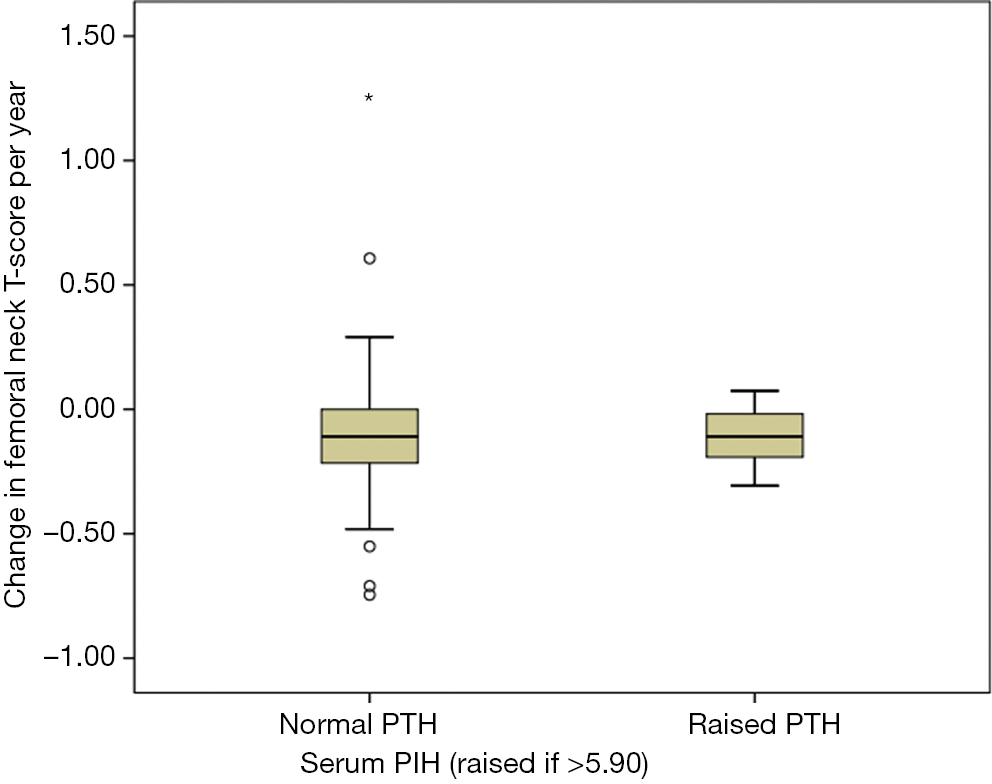 In a previous study (5), we have demonstrated that measurement of PTH at baseline is useful in identifying secondary causes of low BMD. Age and PTH were associated with low baseline BMD. In the current study, it was hypothesized that the baseline PTH may also predict BMD loss over time, with bones possibly being more susceptible to AI-induced loss of BMD in the presence of higher PTH. We confirmed the previous findings that PTH correlates with baseline BMD, but contrary to the hypothesis, did not predict the change in BMD over time. In this cohort, baseline PTH measurement has led to the detection of 4 patients (3%) with disease that required further evaluation and surgical management. Overall, there was a gain in BMD in patients on Tamoxifen, in keeping with the published literature (15). Loss of total hip BMD in patients on AI in this series was 2% per year, which is similar to that observed in the bone sub-study of the ATAC trial, where total hip BMD declined by 7.2% after 5 years of AI treatment. The authors recognize the limitations of the dataset, including the retrospective nature of the study, and small sample size form a single institution.

Prevention and management of bone density loss and subsequent fracture risk is an essential aspect of breast cancer care. Various guidelines exist (6-12), and DXA scan is generally recommended at baseline. The laboratory evaluation of serum calcium and 25-hydroxyvitamin D is recommended prior to commencement of endocrine therapy, with supplementation and further testing often required when abnormalities are detected. However, the measurement of PTH is not included in management guidelines and the usefulness of measuring PTH is unknown.

An interesting finding is that of an inverse relationship between baseline BMD and loss of BMD over time. Those patients that had normal BMD were more likely to have BMD loss than those who were osteoporotic at baseline (defined by a T-score of >2.5). The confounding influence of treatment of low BMD needs to be considered here—however, as data on calcium/vitamin D/anti-resorptive medication used by these patients was not available, this cannot be accurately ascertained. However, unit protocol is to treat patients with osteoporosis at baseline with anti-resorptive therapy, and to consider it for those with osteopenia, but not for those with a normal BMD at baseline. In this group of patients, appropriate use of bone-protective agents resulted in preservation of BMD that was superior to those patients with a normal BMD at baseline. In addition, it can be concluded that it is important to address bone health in breast cancer survivors on an AI even if the baseline DXA is normal.

The advice for bone protection for patients with normal BMD commencing an AI includes pharmacological and non-pharmacological interventions. Whilst there is evidence of modest improvements in BMD in breast cancer survivors following combined impact and resistance training (17) (as well as the emerging overall benefits of exercise in breast cancer survivors), there is little evidence with regards to calcium supplementation in breast cancer survivors. Current guidelines recommend the use of calcium and vitamin D supplementation to prevent BMD loss for patients starting endocrine therapy for breast cancer, despite the lack of evidence. However, the evidence for prevention of endocrine therapy-induced bone loss with bisphosphonates is consistent, with agents such as zoledronic acid and denosumab (anti-RANK ligand antibody) resulting in positive outcomes (18,19). The National Osteoporosis Foundation (6), and the ASCO guidelines (7) recommend that women with a T-score ≤–2.5 should commence antiresorptive therapy unless contraindicated. It is protocol in our unit to adhere to these guidelines, and although this information was not available to us in our database, it is likely to explain the modest AI-induced BMD loss in patients who were osteoporotic at baseline. Hence, our results show that baseline osteoporosis should not be an absolute contra-indication to AI therapy, as long as appropriate bone protection is prescribed.

Routine measurement of serum PTH on initiation of endocrine therapy may provide information regarding baseline bone health and detect previously undiagnosed parathyroid disease. It is not, however, predictive of future bone loss. Even if the baseline DXA reveals normal BMD, consider bone protective agents, both for bone protection and as adjuvant therapy in post-menopausal patients.

Reporting Checklist: The authors have completed the STROBE reporting checklist. Available at http://dx.doi.org/10.21037/abs-20-15

Conflicts of Interest: All authors have completed the ICMJE uniform disclosure form (available at http://dx.doi.org/10.21037/abs-20-15). Prof. GBM serves as an unpaid editorial board member of Annals of Breast Surgery from August 2018 to July 2020. The other authors have no conflicts of interest to declare.

Ethical Statement: The authors are accountable for all aspects of the work in ensuring that questions related to the accuracy or integrity of any part of the work are appropriately investigated and resolved. The study was conducted in accordance with the Declaration of Helsinki (as revised in 2013). The study was approved to be conducted as a quality assurance project under the guidelines of the Human Research Ethics Committee (HREC) of the Royal Melbourne Hospital. Informed consent was waived, as the aim of the project was to review outcomes of treatment to inform future practice, and all information will be protected.