Diabetic mastopathy (DMP) is a rare, fibroinflammatory condition of the breast. It most commonly presents with painless nodules in the breasts of patients with long standing, poorly controlled diabetes. The reported incidence is between 0.6% and 13% and it is often seen alongside other sequelae of long-standing diabetes (1,2). A systematic review published in 2017 detailed the management of over 300 patients with this condition of whom only four underwent mastectomy (3). The same paper describes a case managed with bilateral nipple sparing mastectomy and immediate implant reconstruction, reported as a world’s first. We present the first reported case of extensive, painful DMP managed with nipple sparing mastectomy and immediate free flap reconstruction. We present the following article in accordance with the CARE reporting checklist (available at http://dx.doi.org/10.21037/abs-20-51).

A 51-year-old woman was referred to the Plastic Surgery Department from the Breast Surgeons with problematic DMP affecting her left breast. She reported a gradual onset of pain, lumps and loss of volume affecting the left breast over the preceding two years (Figure 1A). She had undergone three sets of core biopsies that were suggestive of DMP with no evidence of malignancy (Figure 1B). She was seeking treatment to resolve her pain and symmetrise her breasts. She also expressed significant concern regarding the development of further lumps within the breast and the psychological impact of repeated investigations to exclude malignancy. 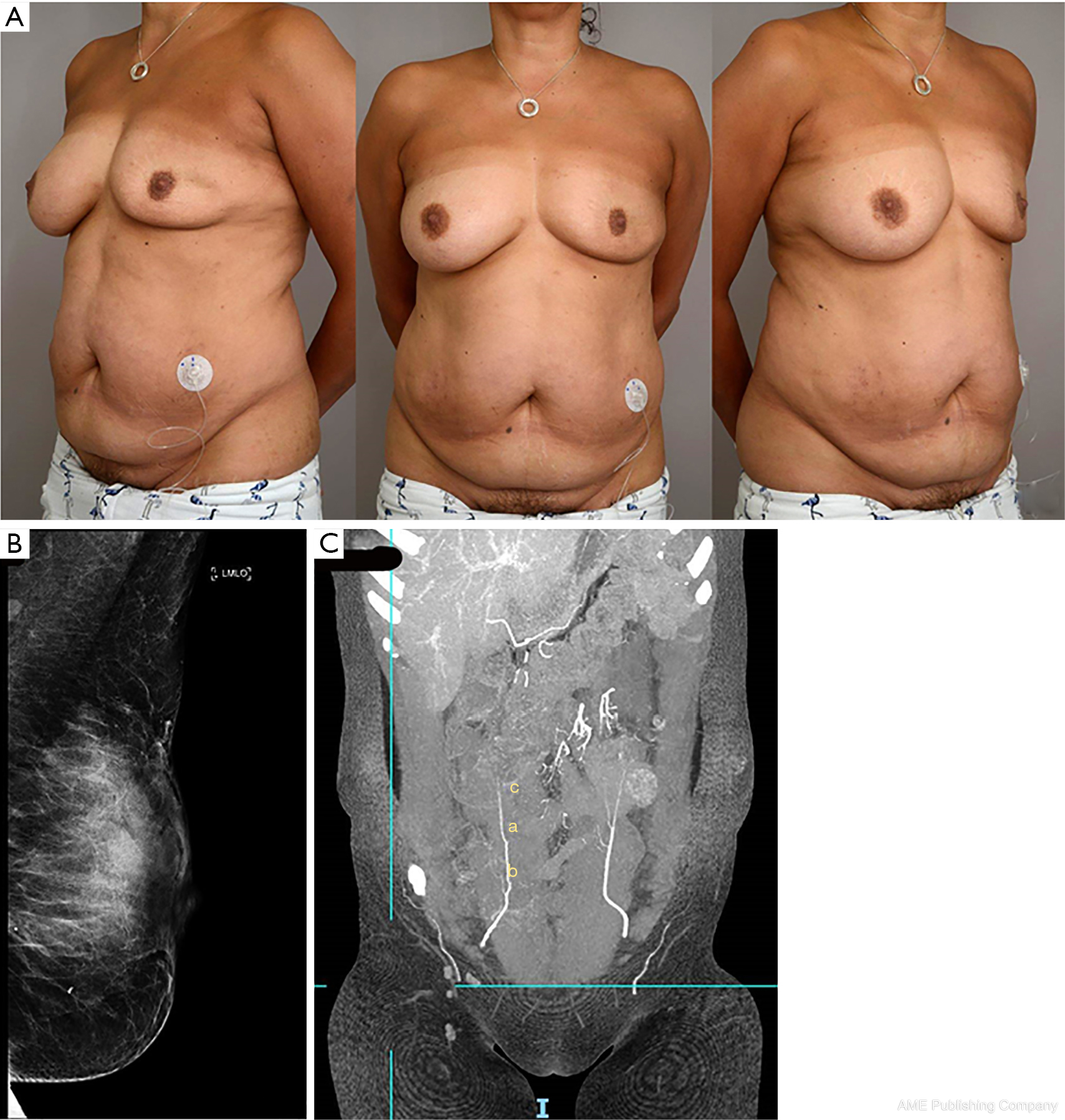 Figure 1 Preoperative images and investigations: (A) pre-operative images with diabetic mastopathy induced volume loss affecting the left breast and insulin pump in situ, (B) left breast pre-operative mammogram demonstrating increased density of the breast tissue, skin thickening and a residual post-biopsy marker, (C) pre-operative CT angiogram delineating the three right sided medial perforators on which the flap was based (labelled a, b, c).

She had been diagnosed with type 1 diabetes at the age of 10 with unstable control of the disease for many years. At the time of presentation, she had been put on a Novorapid® (CS11) insulin pump. She also suffered from diabetic neuropathy for which she took gabapentin. She was an active individual, a non-smoker with no allergies or family history of breast cancer. She wore a 38D/E bra.

On examination, she had breast asymmetry of approximately one cup size with loss of volume of the left breast and bilateral grade II ptosis. The left breast was indented with firm, lumpy retro-areolar tissue. She had good quality abdominal tissue and sufficient pannus to serve as a suitable donor site for reconstruction (Figure 1A).

Due to the severity of her symptoms and her concerns, it was felt that removal of the entire breast tissue and immediate autologous reconstruction would be the best option. Surgical intervention to the right breast was excluded as an option due to the potential risk of triggering disease in an area unaffected by DMP. She was discussed at the Multi-Disciplinary Breast Reconstruction Team meeting and in the absence of any established practice for such an unusual case, she was counselled and offered a nipple sparing mastectomy and immediate reconstruction with a deep inferior epigastric perforator (DIEP) flap.

The insulin pump was stopped one week pre-operatively and the patient was managed on self-administered injections of insulin with support from our Diabetic Nurse Specialists. A nipple sparing mastectomy and immediate DIEP reconstruction was performed as a joint surgical case between the Breast and Plastic surgery teams. The mastectomy weight of 274 g was replaced with a well perfused DIEP flap weighing 786 g with three small medially based perforators (Figure 1C). The subcutaneous abdominal tissue was found to be significantly scarred in the absence of any previous abdominal surgery, likely a consequence of chronic insulin injection. At anastomosis, the arteries were found to be atherosclerotic but adequate blood flow was achieved.

The patient reported almost complete resolution of breast pain post-operatively. Following close inpatient diabetic management, she was discharged four days post-operatively and the insulin pump reinstated at two weeks. Apart from transient generalised skin hypersensitivity at the site of DIEP reconstruction, she had an unremarkable recovery and was discharged from the Dressing Clinic. 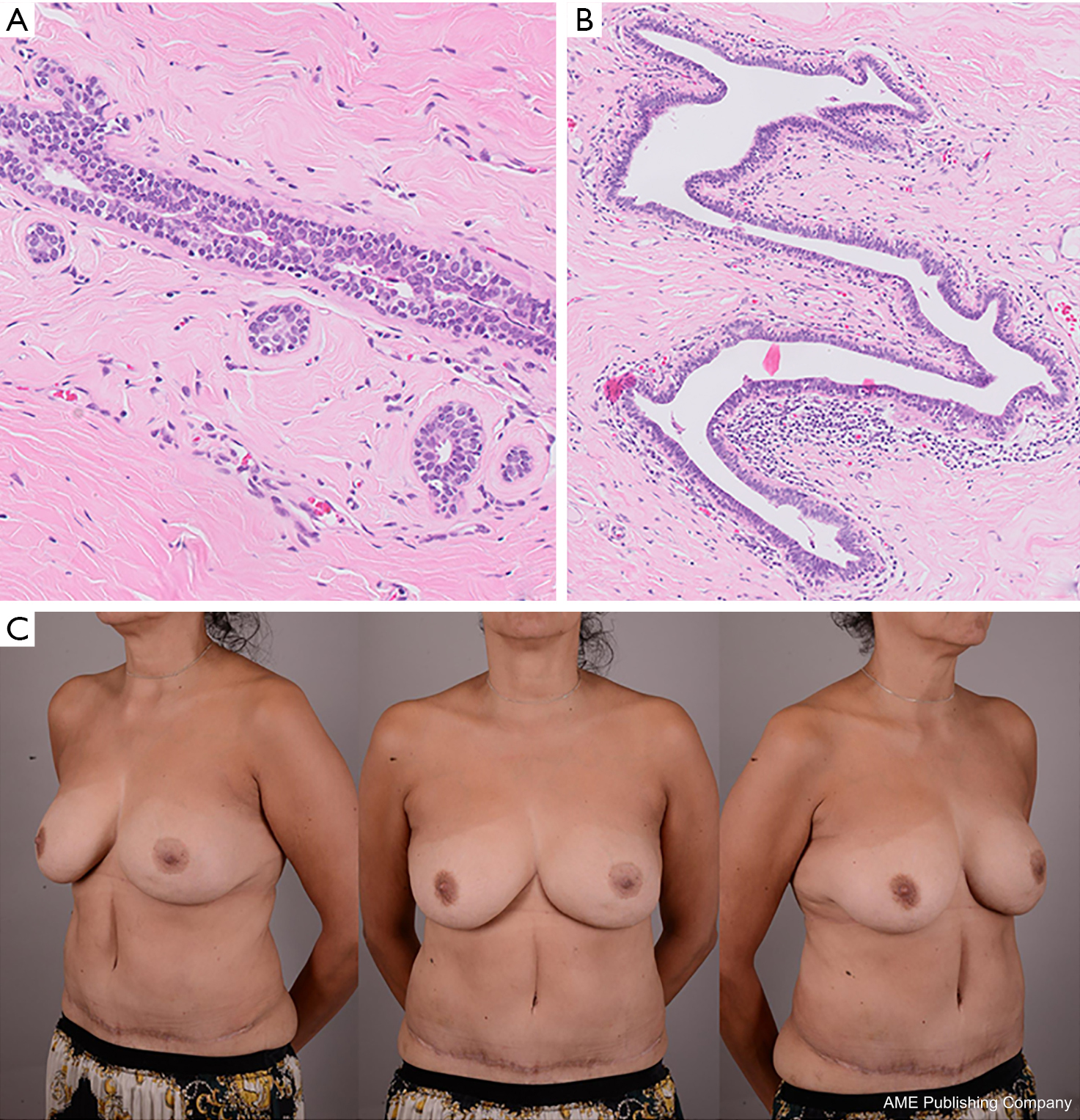 Our patient was delighted with her surgical outcome reporting high satisfaction scores across all domains of the BREAST-Q. There was no disease recurrence noted at two-year follow-up and no need for further surgery. She gained complete resolution of her pain, in addition to a balanced breast volume and an improved contour of the affected breast (Figure 2C).

Fibrous disease of the breast associated with type 1 diabetes was first described by Soler and Khardori in 1984 (1). The disease occurs as a result of a chronic, profound inflammatory process, although the underlying stimulus is still uncertain (4-6). It is most commonly seen in pre-menopausal woman with type 1 diabetes mellitus; however, it has also been reported in association with insulin-dependent type 2 diabetes and thyroid disease (1-5). In 75–80% of cases, patients have established secondary complications of diabetes such as retinopathy, neuropathy and nephropathy (3,6). The disease affects the breast bilaterally in 20–60% of cases (2,3,6).

DMP most commonly presents as painless nodules within the breast, which are often retro-areolar. It is essential to differentiate the disease from malignancy with histological tissue examination. Core biopsy is recommended over FNA due to the low diagnostic yield of FNA in this disease (2). Where possible, surgical excision should be avoided as recurrence at the site of excision is common and often is more extensive that the initial disease, suggesting that surgery itself may exacerbate the condition (2,5,6). Once the diagnosis is confirmed and malignancy excluded, most patients can be simply monitored. However, as in this case, previous reports have described cases of DMP associated with significant pain and impact on quality of life (3). For these patients, there is no established best practice.

A 2017 systematic review found 60 publications detailing the management of 313 patients with DMP (3). Four of these patients underwent mastectomy. We found only one case of reconstructive management in the existing literature with bilateral nipple sparing mastectomy and immediate implant reconstruction (3). This case required surgical revision (exchange of implants) and as expected with implant reconstruction, will likely require further revisions in the future.

These cases benefit from combined management between specialities. The technical considerations include possible atherosclerotic vessels at microsurgical anastomosis. This patient presented a challenging flap harvest due to tissue damage from chronic injection into the abdomen. Definitive removal of diseased tissue and a well-planned autologous reconstruction can prevent the need for multiple procedures and unnecessary stressful investigations. A DIEP flap can provide the ideal donor site in replacing and correcting affected discrepant breast volume. This report demonstrates the first case of definitive management of DMP with autologous reconstruction performed in a single stage, with no recurrence or need for further surgery.

Reporting Checklist: The authors have completed the CARE reporting checklist. Available at http://dx.doi.org/10.21037/abs-20-51

Conflicts of Interest: All authors have completed the ICMJE uniform disclosure form (available at http://dx.doi.org/10.21037/abs-20-51). The authors have no conflicts of interest to declare.

Ethical Statement: The authors are accountable for all aspects of the work in ensuring that questions related to the accuracy or integrity of any part of the work are appropriately investigated and resolved. All procedures performed in studies involving human participants were in accordance with the ethical standards of the institutional and/or national research committee(s) and with the Helsinki Declaration (as revised in 2013). Written informed consent was obtained from the patient for publication of this manuscript and any accompanying images.