Breast cancer represents the most frequent malignant tumor in Western women (1). It is estimated that 1 in 8 women will develop breast cancer throughout their lives. The incidence increases with age, the group with the highest incidence being between 55 and 65 years (2,3). In Spain, breast cancer constitutes between 20% and 30% of diagnosed tumors and the first cause of cancer death in women according to the Spanish Society of Medical Oncology (SEOM). Although incidence has increased in recent years, mortality rate has decreased significantly, presumably related to early diagnose and advances in treatment (4).

Ductal carcinoma in situ (DCIS) or intraductal carcinoma, described by Broder in 1932, is a neoplastic process limited to the mammary ductal system. The DCIS comprises a broad spectrum of pathologies that encompasses high- and low-grade lesions (5,6). It is classified, according to its structural pattern (solid, cribriform, papillary and micropapillary), tumor grade (high, intermediate and low) and presence or absence of comedonecrosis (5,7). The incidence of DCIS has markedly increased in the past decade, primarily due to improvements in screening utilization and imaging techniques. DCIS is considered a localized disease with low, or no metastatic potential on its own to produce regional or distant metastases (8). Axillary involvement rates in this type of tumors are low, with an incidence between 0–5%, according to series based on data prior to the era of sentinel node mapping (9).

The integration of sentinel lymph node biopsy (SLNB) in invasive breast cancer staging has improved the assessment of locoregional disease (10). The SLNB has become the “gold standard” technique for the evaluation of axillary involvement in patients with invasive breast cancer. Its role in the DCIS is controversial, due to the apparent lack of invasive capacity of this subtype (9,11). With sentinel lymph node mapping, axillary metastases can be identified in up to 12% of selected “high-risk” patients with DCIS with or without microinvasion (9). Axillary involvement in these patients would be secondary to the existence of invasive or microinvasive foci not previously diagnosed in the preoperative biopsy (12). Despite the low incidence of lymph node involvement in DCIS, an increase in the performance of SLNB has been reported in the recent years.

The Spanish Society of Senology and Breast Pathology (SESPM) published in 2007 the first consensus paper regarding the use of sentinel lymph node in breast cancer (13). Consensus agreement on SLNB in DCIS included several requirements as: tumor (DCIS) size ≥4 cm, high grade, the presence of comedonecrosis, and if mastectomy was the surgical treatment. This document was subsequently updated in 2014; tumor size was reduced to ≥3 cm and the presence of a palpable breast mass (2) was included as a criteria for SLNB, without any modification of the other factors (14).

The aim of this study is to show that SLNB is not necessary in most patients with DCIS, due to low probability of lymph node involvement, thereby avoiding over-staging and over-treatment. We designed this retrospective study with DCIS patients where a SLNB axillary staging had been performed. As expected, most of the sentinel nodes were negative (negative, isolated tumour cells), or the pathological result involved no change in treatment (micrometastases). Only a minor number of the treated tumors in our study were considered “high-risk”, due to the presence of microinvasion or invasion in definitive histopathological analysis. We tried to identify this subgroup of patients with risk factors, who would benefit from sentinel node biopsy, in whom the sentinel node involvement would imply a change in treatment.

We present the following article in accordance with the STROBE reporting checklist (available at http://dx.doi.org/10.21037/abs-20-24)

The Tumor Registry of Castellón Database, a Spanish province (579,245 inhabitants), was queried to identify 1,516 patients with an initial diagnosis of breast cancer between October 2006 (when SNLB was introduced) and November 2013. Of these, 117 consecutive patients who underwent surgical treatment for DCIS were retrospectively reviewed. The variables included in this study were collected from the database of the Surgical Departments of the two hospitals involved in the treatment (Hospital Provincial and Hospital General of Castellón). A total of 109 patients with final diagnosis of DCIS were included (Figure 1). Exclusion criteria were as follows: no histopathological surgery report (n=3), presence of microinvasion or invasion (n=2) on pathology report, bilateral tumors (n=2), Paget disease (n=1). 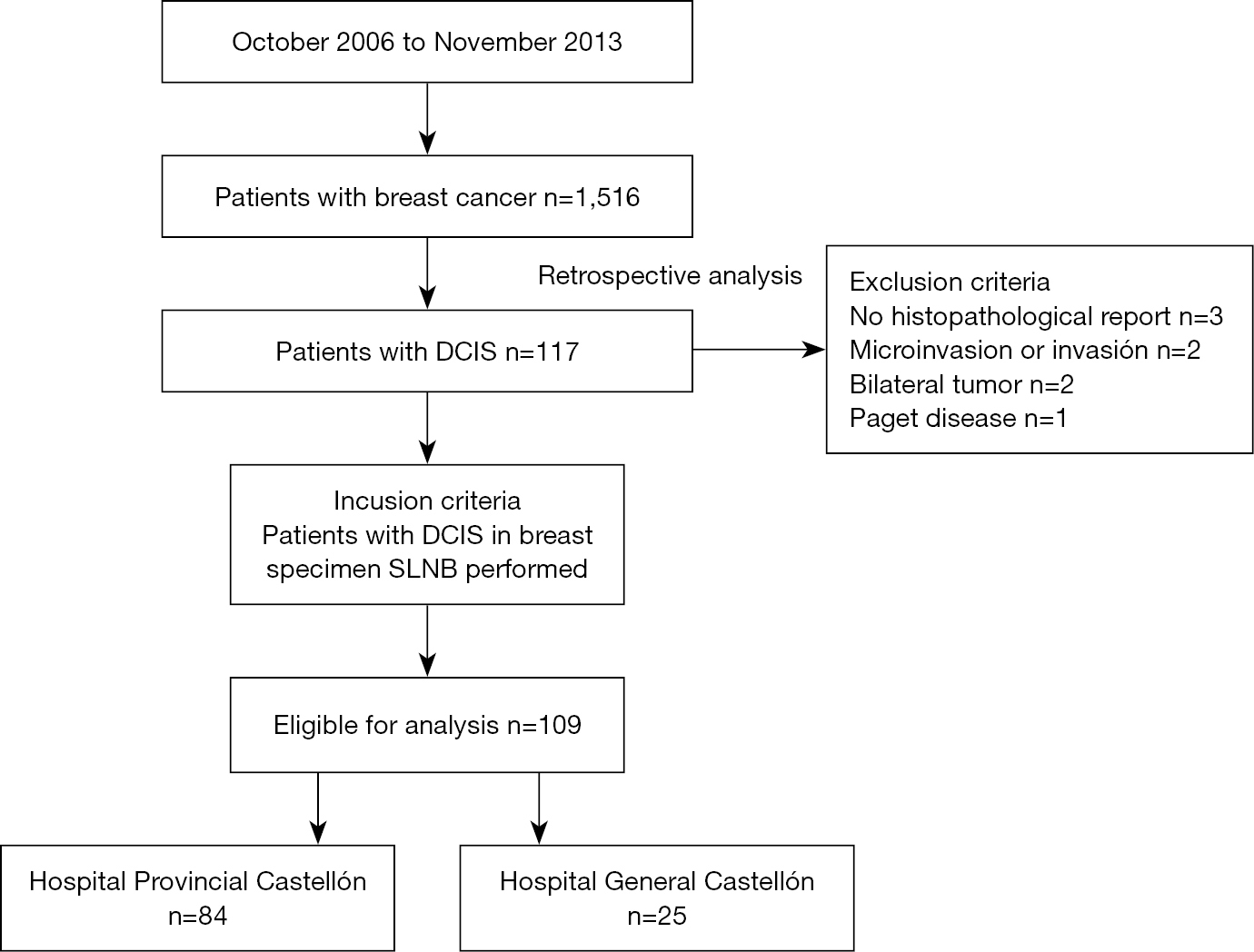 The primary outcome was achieved by descriptive analysis of preoperative and postoperative clinic-pathologic variables. Unknown variables were not included in the analysis. The Student t-test or nonparametric Mann-Whitney test, when the assumption of normality was not met, for continuous data, and the χ2 test or Fisher exact test for categorical data. When more than 2 groups were compared, we used the χ2 test for categorical variables and the Kruskal-Wallis test for continuous variables. Univariate logistic regression statistics was applied to study the association of the Consensus related factors to the pathologic result of the sentinel node using χ2 test. The P values were calculated at a 5 percent level of significance. The statistical analyses were performed using IBM SPPS Statistic® software (version 20; SPSS, Inc., Chicago, IL, USA).

Mean patient age was 57 years (range, 33–79 years). Table 1 summarizes the patient, tumor, and treatment characteristics of the sample. Most of our cases were diagnosed by the Regional Screening Programme through checkup mammography (67.9%), and 35 patients were detected at the Breast Clinic from both hospitals. Microcalcifications was the most frequently described radiological lesion (60.6%). No differences were found between the rates of needle or excisional biopsy methods. Mean tumor size was 17.6 mm (range, 0.4–50 mm). Most tumors were histological grade 3 (42%), with comedonecrosis CDIS pattern (62.4%), positive hormonal receptors (Oestrogen receptor: 61.5%; Progesterone receptor: 44%). Breast conservative therapy (86.2%) was the most used surgical treatment.

It is well known that population breast screening programs have increased detection and diagnoses of early tumors and ductal carcinoma in situ (DCIS) (6). In this study, most of the patients were registered from the Breast Cancer Prevention Program, run by the Regional Health Services in Castellón. DCIS was diagnosed by mammography abnormality findings in most of our patients. This justifies the low number, only seventeen (15.6%) large size (≥3 and 4 cm) DCIS. Tumor size is related with axillary lymph node involvement in invasive ductal carcinoma, and probably this is also valid in DCIS. Other authors (15), have used the tumor size as a possible risk factor for nodal involvement in DCIS, and have advised performing SLNB to their patients. Only six of the included patients (5.5%) presented a tumor size ≥4 cm. Following SESPM’s recommendation for tumor size SLNB was performed in 3 (50%). The pathology report showed a negative SLN in one, isolated tumor cells in another and micrometastases in the third patient. For these three patients, the outcome of SLNB involved no change in management. When applying the criterion DCIS tumor size ≥3 cm, seven patients out of seventeen (41%) underwent SLNB staging (Table 2). None of these staging procedures involved a change in patients’ treatment. No significant relationship was observed between tumor size (≥4 cm: P=0.051; ≥3 cm: P=0.473) and sentinel node biopsy. When using the tumor size to recommend SLNB, two out of 17 patients were upstaged to invasive or microinvasive carcinoma, and all 17 overtreated, because SLNB didn’t change patient’s management.

Almost half of the patients were diagnosed with a grade 3 DCIS similar to other series (4). When this criterion was applied to recommend SLNB, 5 patients were upstaged (ITC: 2; micrometastases: 3) and, because these results involved no modification in management, all 28 patients were overtreated. SLNB not performed in all high grade patients, as SESPM Consensus indicates (13,14), and no statistical significance was reached (P=0.051), perhaps due to the small number.

In pure DCIS, comedonecrosis is a known factor of a more aggressive behavior (16-18) with lymphatic spread. Comedonecrosis was present in 42 (40%) patients that underwent SLNB. Seven cases (Table 2) exhibited tumoral cells in the SLN (P<0.001) and thus, were upstaged. The patient with the macrometastases was benefited by the SLNB procedure, however the other 41 women were overtreated. None of the cases changed their management planning. The patient with the macro-metastases underwent standard radiation therapy as a part of the adjuvant conservative therapy. Based on our results when comedo DCIS is present, SLNB should be discussed with the patient.

When mastectomy is the chosen treatment for pure DCIS, SLNB is usually recommended. If invasion is present in the mastectomy specimen, an axillary staging procedure should be added, as mastectomy disrupts the lymphatic drainage. Then axillary dissection would be the only option. Fourteen out of fifteen mastectomy patients underwent SLNB. The SLN was positive in 5 (ITC: 1; micrometastases: 3; macrometastases: 1) cases (P<0.001), and they were upstaged (35.7%) in the mastectomy subgroup. All patients except one were overtreated when mastectomy was the recommendation for SLNB. The other four positive SLN patients should be followed up. Invasive ductal carcinoma patients with ITC or micrometastasis are known to have a worse outcome when compared with negative SLN. After breast conservation therapy standard radiotherapy fields includes the axilla, but when mastectomy is performed, axillary dissection is the preferred treatment.

Early breast carcinomas are typically small and non-palpable lesions. Palpable DCIS are larger than non-palpable and therefore more prone to micro-infiltration (19). The recommendation to add SLNB to the surgical management of DCIS was included in 2014 (14). Eleven out of twenty women with palpable DCIS underwent SLNB. One of them had macrometases and two patients had micrometastasis respectively (P=0.382). Three out of 11 (27.2%) patients were upstaged and 10 women overtreated.

The main limitation of our study is the retrospective design. DCIS patients represent a small percentage of total breast cancer diagnosed in Spain and this was a multi-institutional study so external validation is desirable. Furthermore, data regarding some variables were missing in the clinical report of some patients, and conclusions cannot be extrapolated outside of analyzed population.

In our cohort, the application of the SESPM criteria (13) for SLNB, taken individually, has not provided any clinical benefit to women. The results were in most of cases positive for micrometastases and isolated tumor cells without changes in axillary management. Following these recommendations, we have upstaged 24 women and over-treated 102. There is a need for evidence-based guidelines, predictive analysis models, clinical algorithm, like the USC/Van Nuys Prognostic Index (20) or the association study of several of them, in order to make appropriate shared decisions.

Reporting Checklist: The authors have completed the STROBE reporting checklist. Available at http://dx.doi.org/10.21037/abs-20-24

Conflicts of Interest: All authors have completed the ICJME uniform disclosure form (available at http://dx.doi.org/10.21037/abs-20-24). The authors have no conflicts of interest to declare.

Ethical Statement: The authors are accountable for all aspects of the work in ensuring that questions related to the accuracy or integrity of any part of the work are appropriately investigated and resolved. The study was conducted in accordance with the Declaration of Helsinki (as revised in 2013). The study was approved by the Hospital Provincial de Castellón Institutional Review Board, Independent Ethics Committee (CEIm Hospital Provincial de Castellón). Informed consent is not required in the retrospective study.