Schwannoma of the breast: a report of rare location and a brief literature review

The schwannomas, also reported as neurilemmoma, neurinoma, lemmocytoma are the most common benign neurogenic tumors of the peripheral nerve in adults. It can arise in any anatomical sites in the body, and is commonly found in the head, the neck (25–45%) and the flexor surface of the extremities (1). However, the origin from the breast of schwannoma is extremely rare and represents only 2.6% of benign neurogenic tumors (2). The authors report in this observation, the first case of giant breast schwannoma described in Madagascar. We discuss the different aspects regarding the diagnosis and management of this disease.

A 38-year-old woman came to our observation and presented with giant breast swelling. In background history, the patient noticed a mass in her right breast around 2009, and she underwent her first surgery from a lumpectomy whose histological examination revealed a phyllode tumor. In 2012, our patient had recurrences of right breast tumor and had a conservative surgery (lumpectomy) which found a giant breast fibroadenoma without signs of malignancy. She had no family history Von Recklinghausen’s disease, or breast cancer.

At physical examination, the right breast had a large swelling (25 cm × 14 cm × 11 cm), occupying all the quadrants (Figure 1). There is no skin lesion like orange peel, no umbilical nipple; the palpation of the mass was painless, mobile (Figure 1A,B). There were no palpable enlarged axillary lymph nodes and no abnormal findings were detected in active skin examinations. The routine haematological and biochemical tests have not found any abnormality, including for tumor markers CA 15-3. 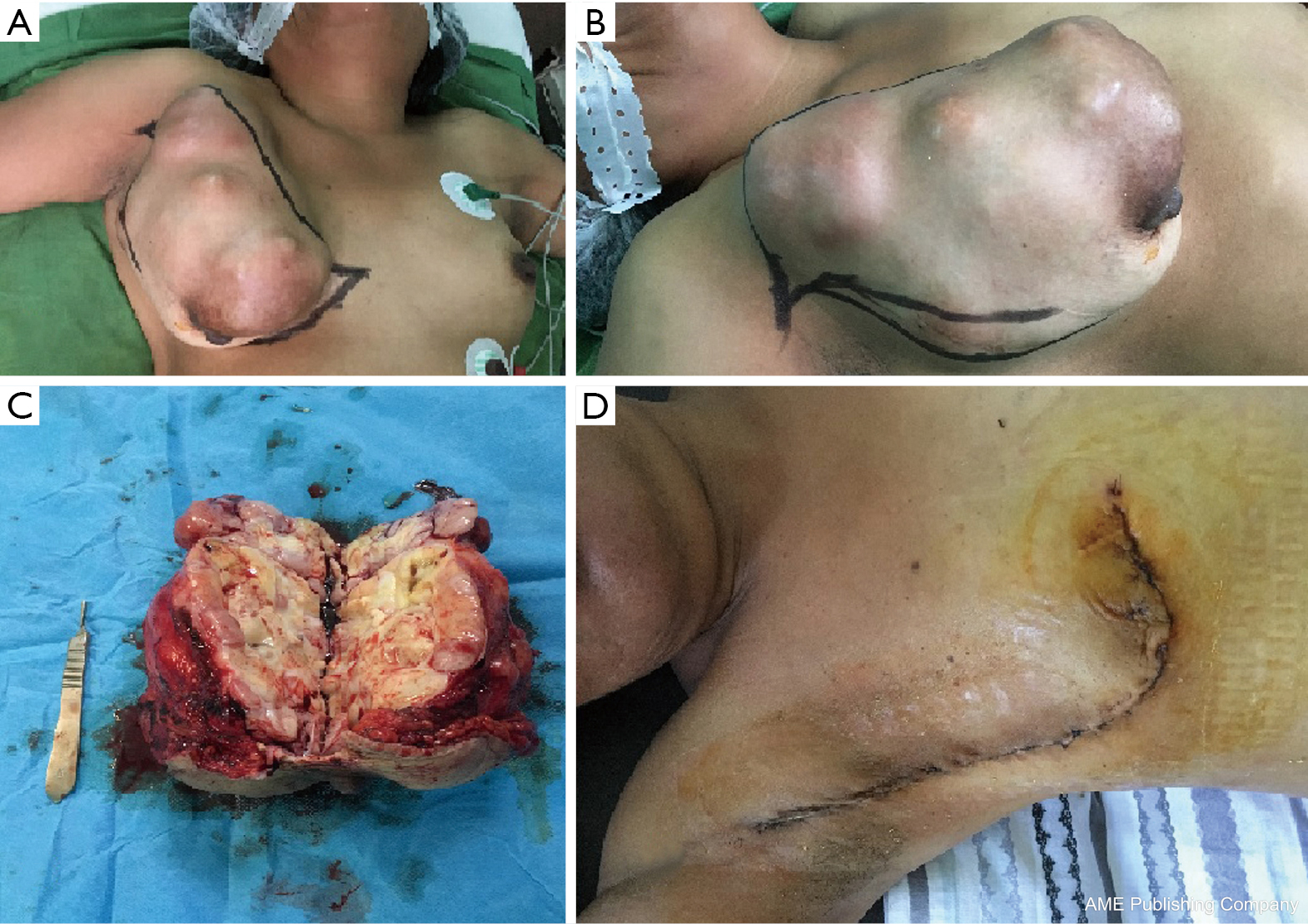 The ultrasonography and mammography showed a clearly demarcated and inhomogeneous solid mass indicating a benign mass as well as fibroadenoma. The patient underwent a fine needle aspiration biopsy (FNAB) of the right breast and the pathology confirmed the diagnosis of fibroadenoma.

Figure 2 CT scan in axial cut (A) and sagittal cut (B) findings a large heterogeneous and well demarcated multiloculated tumor occupying all the quadrants of right breast.

The diagnosis of recurrence breast fibroadenoma had been retained; the tumor was excised for extemporaneous examinations which confirmed absent malignant tumor. She underwent a mastectomy without axillary lymph node dissection.

At operation, there was a well-defined and an oval shaped mass multiloculated and measuring 25 cm × 14 cm × 11 cm. The external surface of the mass was grey-white and smooth. It was multilocular and well circumscribed (Figure 1C).

The histological examination of specimen revealed a schwannoma with the nodule consisting of spindle-shaped, non-atypical cells organized in bundles, whose arrangement of palisade nuclei gives a zebra-like appearance called the “Verocay nodule” confirming the diagnosis of breast schwannoma (Figure 3). Immunohistochemical examination was not honoured in our case. The postoperative course of the patient was uneventful. She has been followed-up for 1 year with no evidence of recurrence. 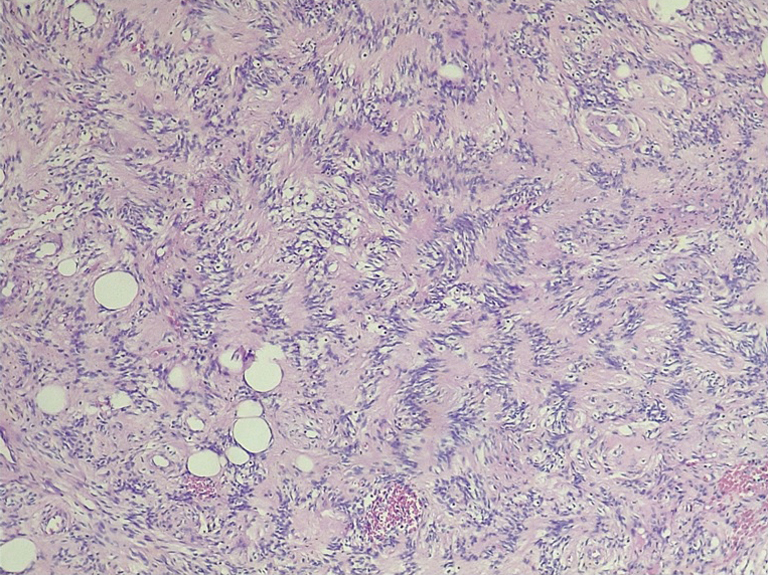 Schwannoma is also known as “neurilemmoma” and “neurinoma”. It was recognized and identified for the first time in 1910 by Verocay and was defined as a neoplasm exclusively composed of Schwann cells of the peripheral nerve sheath, which is derived from the neural crest and generally affecting sensitive fascicles of the cranial and intercostals nerves (3). Breast site of schwannoma was first reported by Collins et al. (4). This non-epithelial tumor origin of the breast is extremely unusual (2). A few cases were described in English literature and as far as we know, this is the first case of breast schwannoma described and managed in our country. It is an unusual location and represents approximately 2–3% of all schwannomas and that 0.2% of all breast tumors are schwannoma (2,5).

This tumor is usually benign, slow-growing tumor, usually solitary tumor and can emerge at any age, although they are more common in people over 40 years old, and show no preference for sex or ethnicity (6). It’s most common locations are the flexor surfaces of the extremities, neck, head, mediastinum, retroperitoneum, and posterior spinal roots (7). The tumor can vary in size from a few millimeters to >20 cm, but usually measures <5 cm (8). In our knowledge, our clinical case represents the first giant breast schwannoma (9.84 inches) described in the literature.

The breast benign schwannoma effects with an almost equal male: female ratio. The age range of patients can vary between 18 and 83 years, with an average age of 48.6 (9,10).

The average size is 3.74 cm with extremes ranging from 0.7 to 11 cm. The tumor reaches the right breast in two-thirds of cases. Unlike other mammary tumors that are predominantly on upper outer quadrant, schwannoma can affect all quadrants equally (2,11).

Schwannoma may occur spontaneously or in the context of a familial tumor syndrome such as neurofibromatosis type 2 (NF2), schwannomatosis and Carney’s complex. Central to the pathogenesis of these tumors is loss of function of merlin, either by direct genetic change involving the NF2 gene on chromosome 22 or secondarily to tumor suppressor gene merlin (schwannomin) inactivation (12). In our case, manifestations of genetic syndromes like neurofibromatosis (NF) or schwannomatosis were absent.

Breast schwannoma discovered in the clinically palpable nodule or mass stage has no specific characteristic but appears as a benign tumor (5). This made the preoperative diagnosis difficult as our observation.

The radiological features of ancient schwannoma are not well-defined because of their rarity. The long-term progression of the tumor results in characteristic degenerative changes, such as cystic formation, calcification, haemorrhage and hyalinization. Despite, ultrasound, mammography, chest CT or MRI are useful to assess the size, the margin and the histological nature of the tumor correlation according to American College of Radiology classification (13). In positron-emission tomography/computed tomography (PET/CT), schwannoma is a potential aetiology of high FDG uptake and providing a risk of worse interpretation with consequences on patient management (14). Most schwannomas often have a high level of FDG uptake. In this case, clinicians and radiologists should be kept particular attention in the differential diagnosis to the interpretation of PET-positive (15). Among these differential diagnoses, other malignant spindle shaped breast tumors as dermatofibrosarcoma protuberans, leiomyosarcoma, fibrosarcoma, synovial sarcoma, malignant fibrous histiocytoma) should be kept in mind of physicians to differentiate from cellular schwannoma (13). In our case, the clinical features and imaging are similar to what has been reported on breast schwannoma in literature (2,9,11). Diagnosis using fine-needle aspiration cytology (FNAC) has been reported in a few studies (16,17). Despite, the interpretation of the slides remains very difficult given the rarity of this tumor and the small number of analyzable cells in the aspirate sample.

In practice, we recommend preoperatively that an excisional biopsy should be performed for histological diagnosis and for the purpose of treatment because of the recurrent nature of the breast tumor. Surgical complete excision is the treatment of choice of this lesion and has a good prognosis (17,20). In our case, the mastectomy was performed because of the size of our tumor. After surgery, no recurrence has been reported and malignant transformation of the lesion is extremely rare, although local recurrence may occur after incomplete resection (10).

Breast schwannomas are rare benign neoplasms however it is difficult to distinguish them, clinically and radiologically, from other mammary nodules. Schwannomas might simulate a malignant neoplasm on clinical examination as well as imaging. We recommend clinicians to establish the schwannoma diagnosis only on histopathological examination to avoid a wrong diagnosis based on the morphological features. The authors recommend as well a surgical biopsy to have the histological diagnosis for any recurrent character of breast tumor. Surgical excision is the definitive treatment of breast schwannoma and has a good prognosis.

We thank the Department of Anatomical Pathology, Joseph Ravoahangy Andrianavalona University Hospital, Antananarivo (Director: Prof. Randrianjafisamindrakotroka NS) and the Radiological Department (Director: Prof. Ahmad A) for providing the histological figure, X-rays and CT scan and for their useful suggestions that greatly improved the manuscript. We are thankful to our colleagues at HU/JRA.

Ethical Statement: The authors are accountable for all aspects of the work in ensuring that questions related to the accuracy or integrity of any part of the work are appropriately investigated and resolved. Written informed consent was obtained from the patient for publication of this case report and any accompanying images.