Fat grafting is universally recognized as an adjuvant technique for breast reconstruction to augment volume, achieve symmetry, and improve contour deformities. For many years, this was not considered the norm or even accepted. In 1987, the American Society of Plastic and Reconstructive Surgeons Ad-Hoc Committee on New Procedures published the first Fat Grafting Report which advised against the use of autologous fat injections for breast augmentation due to its potential risk of impeding breast cancer detection. Over the next two decades, the American Society of Plastic Surgeons implemented a Fat Grafting Task Force to further review its safety and efficacy. The Task Force published the Guiding Principles of Fat Transfer/Fat Graft and Fat Injection in 2009 concluding that fat grafting was indeed safe and efficacious for breast augmentation. Shortly thereafter in 2012, the Task Force expanded its description to further include breast reconstruction (1-3).

It is traditionally utilized in conjunction with either implant or flap-based reconstruction; however, it can be an exclusive option for total breast reconstruction in select patient populations. Patients who have refused or failed implant reconstruction or deemed high risk or unwilling to proceed with flap-based reconstruction can obtain an aesthetically pleasing result using serial autologous lipoinjection. This technique can be performed with relative ease, low rates of complication, and minimal donor site morbidity (4,5). We implemented this technique in conjunction with “Goldilocks” mastectomies and have shown that it can produce satisfactory breast volume and shape in select patients.

A 69-year-old female presented with right breast cancer. Her BMI on presentation was 30.1. On physical exam, she had bilateral grade III ptosis with moderate abdominal and medial thigh lipodystrophy (Figure 1). The patient underwent bilateral “Goldilocks” mastectomies and but did not want flap-based or implant reconstruction. She opted for serial fat grafting to the breasts. She underwent a total of three grafting session at three-month intervals. The donor sites included her abdomen, flanks, and medial thighs. The total fat grafting to the right breast was 680 cc and to the left breast was 880 cc. She did not suffer any oil cysts, fat necrosis, or any other complications throughout the follow-up period. She was very satisfied with the projection, volume, and contour of her result (Figure 2). 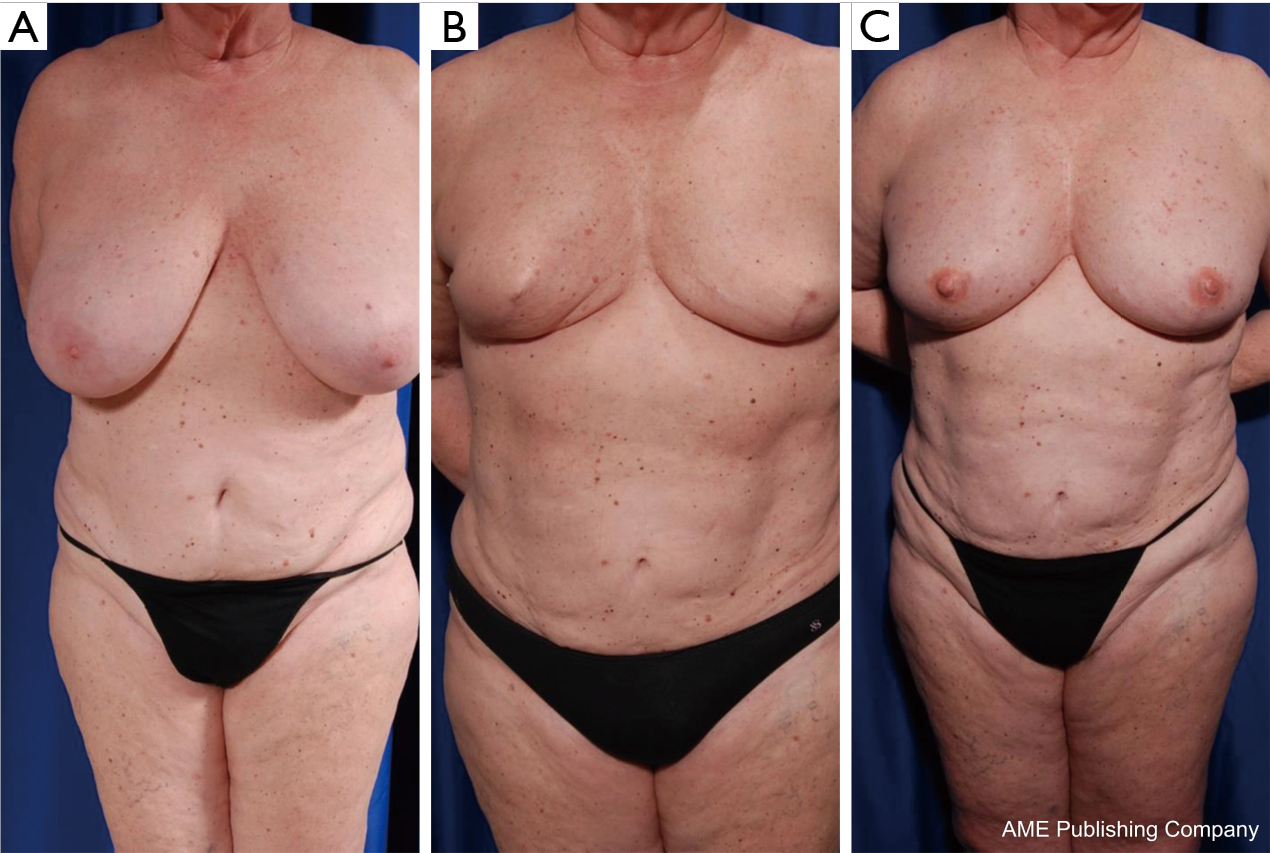 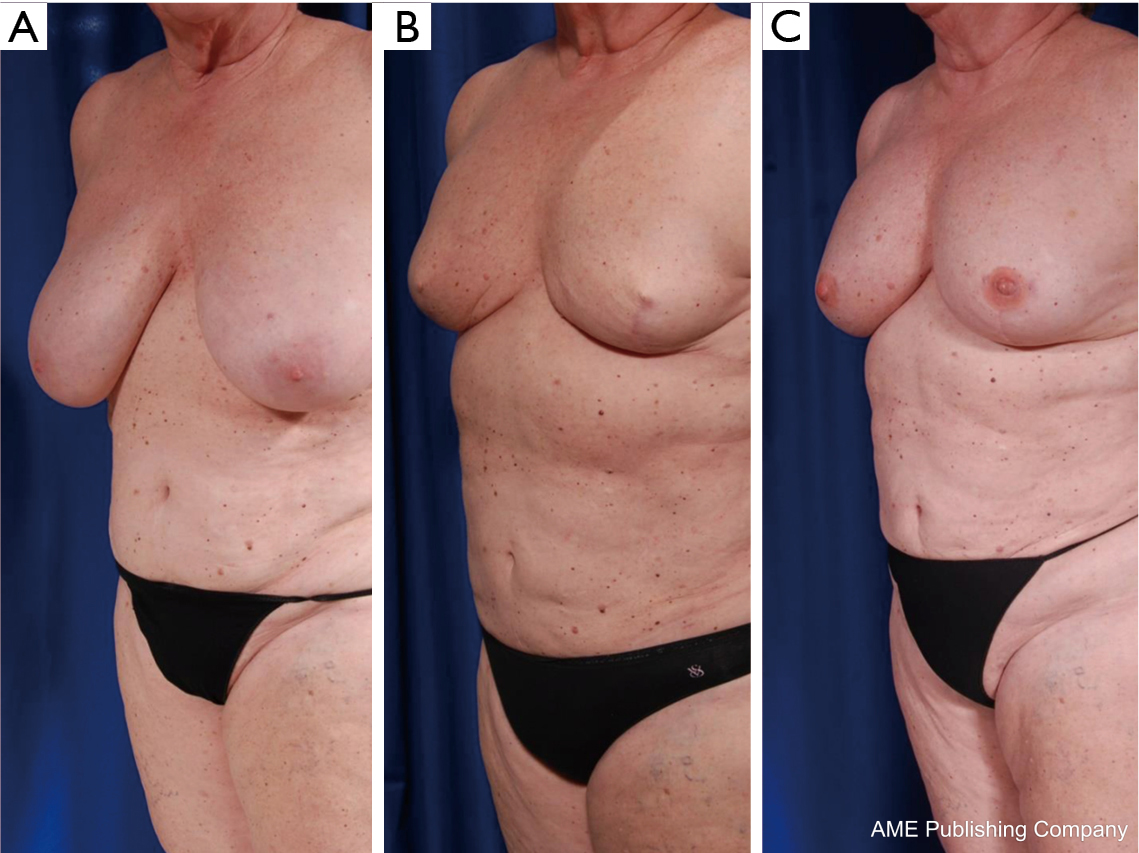 A 54-year-old female presented with right breast cancer. Her BMI on presentation was 43. On physical exam, she had large, grade III ptotic breasts bilaterally with significant abdominal lipodystrophy (Figure 3). She underwent bilateral mastectomy with tissue expander placement initially without complications. During radiation of her right chest, her right tissue expander became infected and she developed a seroma on the left which necessitated subsequent removal of bilateral tissue expanders. Due to her obesity, she was not an ideal candidate for flap-based reconstruction. We discussed the option of serial fat grafting and she agreed to proceed. After six months following removal of tissue expanders, the patient underwent local tissue rearrangement of her right breast in addition to fat grafting to bilateral breasts. She underwent a total of four grafting sessions. The total fat graft to the right breast was 1,670 cc and to the left breast was 1,350 cc. She did not suffer any complications with regards to the serial fat grafting. She was satisfied with her volume and projection, despite the contracted lower pole of her right breast due to the history of infection and radiation. 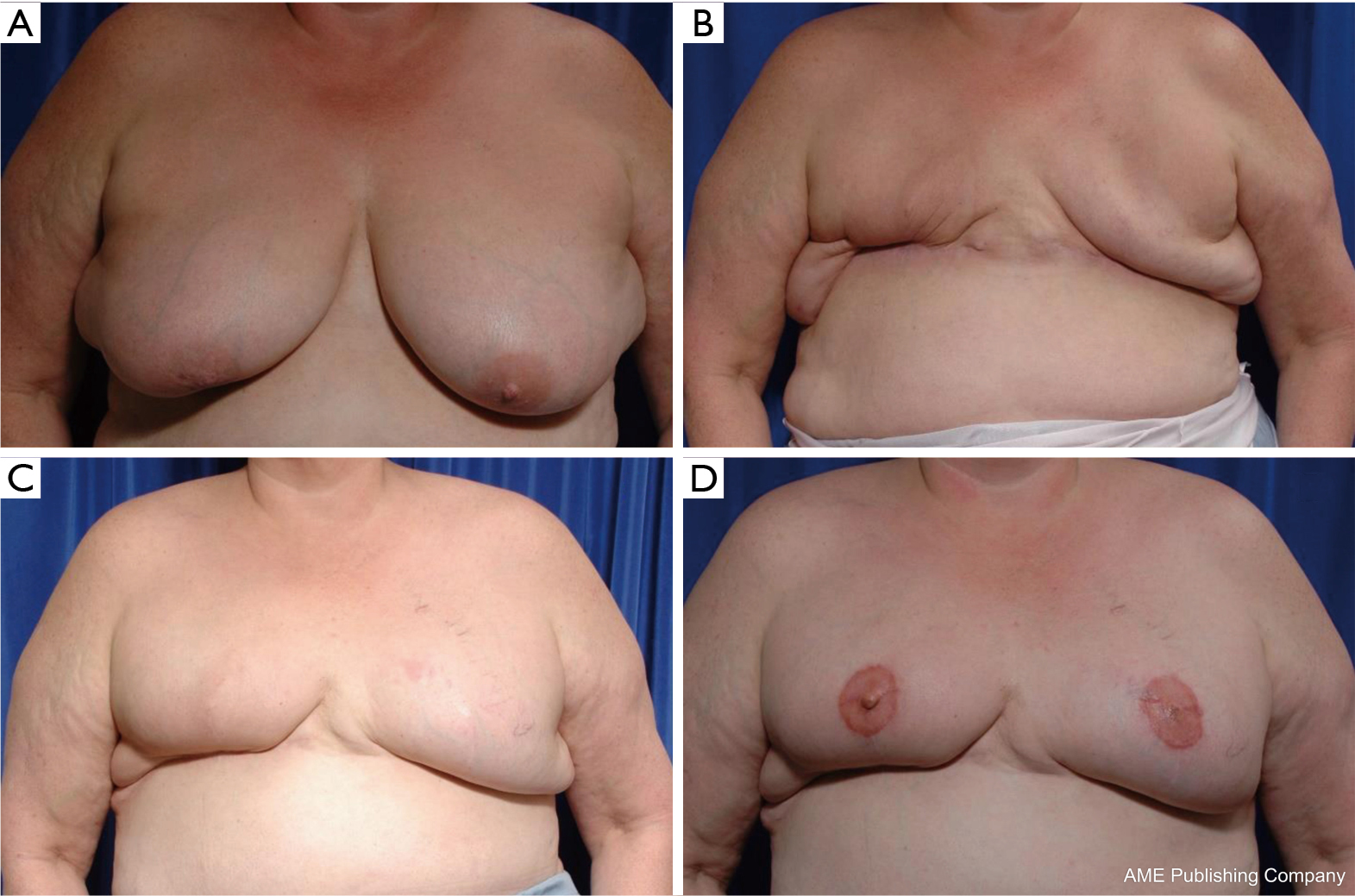 A 60-year-old female presented with right breast cancer. Her BMI on presentation was 30.4. On physical exam, she had bilateral grade III ptosis with moderate abdominal lipodystrophy (Figure 4). After discussion with her family, she opted for bilateral mastectomy and multi-stage fat grafting as she was opposed to the recovery of flap-based reconstruction and did not want prosthetic reconstruction. She underwent “Goldilocks” mastectomies and three fat grafting sessions, each at three-month intervals. Her total fat graft for the right breast was 1,070 cc and for the left breast was 1,020 cc. She did not experience any complications throughout the extent of her procedures. She was very satisfied with the volume, contour, and natural feel of her result. 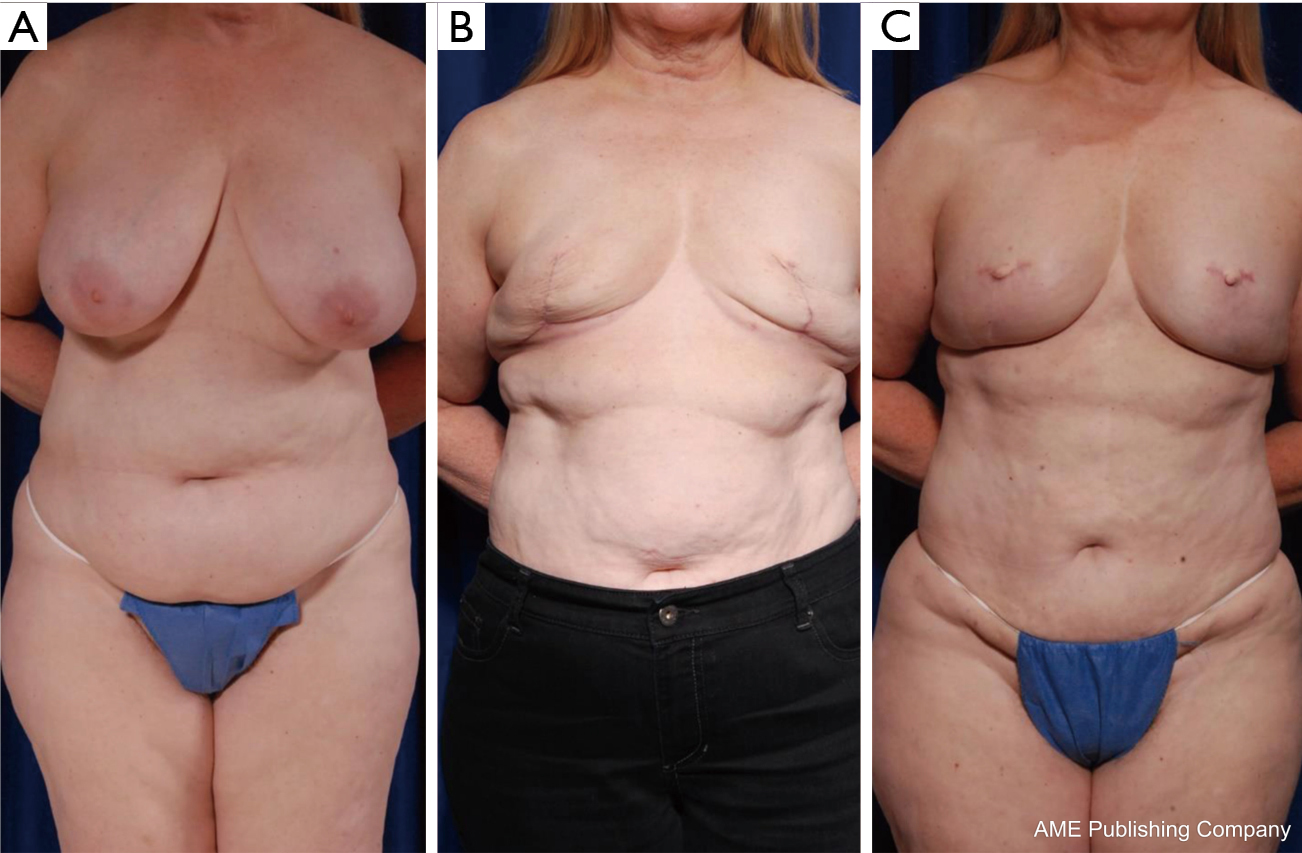 All fat grafting procedures were performed under general anesthesia by the senior authors at an outpatient surgery center. Our series was comprised of three patients. Two patients underwent “Goldilocks” mastectomies while a third patient underwent local tissue rearrangement following implant failure due to radiation. Fat was harvested using liposuction cannulas at 10 inches of Hg negative pressure from available donor sites. The lipoaspirate was processed via centrifugation at 100 g for 30 seconds. At the initial stage, the fat was injected under direction visualization into the intra-muscular and submuscular planes. In subsequent grafting sessions, the lipoaspirate was additionally injected into the subcutaneous plane. In each instance, the lipoaspirate was mindfully and purposefully injected to create an aesthetic central breast mound. No pre-expansion of the breast envelope was performed, and no tacking or cinching sutures were utilized. Multiple fat grafting sessions were performed until patients were satisfied with their overall breast volume and contour (Table 1).

Autologous lipoinjection is traditionally employed as an adjunct technique to implant and free-tissue breast reconstruction. More recently, it has been used exclusively for breast augmentation as well as for total breast reconstruction after mastectomy in certain patient populations (6,7). Fat transfer alone can produce aesthetic breast results in those patients who refused prosthetic implants, failed implant reconstruction, do not wish to undertake the risks and morbidity of flap-based reconstruction, or deemed too high-risk for free-tissue transfer. There have been few case reports in the literature of the utilization of fat grafting for total breast reconstruction after mastectomy. Babovic was the first to report the success of this technique in 2010 (8). In 2011, Serra-Renom et al. developed additional techniques such as puckering sutures, cone-formation pexia, and neoformation of the inframammary fold to help remodel breast shape (9).

Our multi-stage fat grafting technique was performed in conjunction with the “Goldilocks” mastectomy popularized by Richardson and Ma. This type of mastectomy was originally described as a skin-sparing mastectomy through a wise-pattern incision, utilizing the residual cutaneous mastectomy flaps to help create a breast mound (10). Despite the paucity of breast volume in their results, patients were satisfied because their goal of single-stage extirpation and reconstruction was achieved. We found that the combination of the residual, de-epithelialized skin flaps in addition to the volume at the initial stage of fat grafting provided ample tissue in creating an initial breast mound. The amount of fat grafting performed at the initial stage of mastectomy was performed under direct visualization but was limited by the intramuscular and submuscular spaces so as not to inject graft into the newly created mastectomy pocket. In subsequent grafting sessions, the more defined subcutaneous layer was additionally grafted. By strategically placing fat within these three layers, we were able to create an aesthetically pleasing breast in terms of shape and volume without the adjunctive need for modeling sutures.

Patient selection is crucial for attaining successful, aesthetic results. The ideal candidates are medium to large-breasted women who wish to be smaller in size, prefer the look of natural tissue as opposed to prosthetic implants, and desire results requiring minimal operative downtime. From an oncologic perspective, these patients must be suitable for skin-sparing mastectomies to ensure that there will be an adequate skin envelope to accommodate multi-planar lipofilling. Moreover, these patients must be amenable to multiple outpatient procedures and obviously possess adequate donor sites for graft harvest. In addition to the natural feel of autologous fat grafting to the breasts, patients also experience notable contour improvements of their donor sites.

As autologous fat transfer has become customary, greater emphasis has been directed toward graft survival and long-term viability. Several studies have analyzed various harvesting and processing techniques with the hope of improving these results. Centrifugation, particularly over 3,000 g, has been cited to cause damage to adipose cells (11). Other studies; however, have shown centrifugation having the most consistent maintenance of graft volume despite the lower viability of adipocytes (12). Various techniques have been explored including lipoaspirate processing via rolling on Telfa gauze which has shown to increase the number of functional adipocytes compared to centrifugation leading to greater graft persistence (13). The debate between whether manual or liposuction harvest is more effective remains uncertain, but Rosing’s systematic review of autologous fat grafting for breast reconstruction did show that the method of injection had a greater impact on successful outcomes rather than harvesting and processing techniques (3). As much ambiguity still exists, further research is needed to help elucidate these details.

Our series establishes autologous lipoinjection as a viable alternative to implant and free tissue transfer for total breast reconstruction after mastectomy. We demonstrate that multi-stage fat grafting can produce aesthetic, satisfactory results in terms of both breast volume and shape with minimal morbidity in select patient populations.

Ethical Statement: The authors are accountable for all aspects of the work in ensuring that questions related to the accuracy or integrity of any part of the work are appropriately investigated and resolved. Written informed consent was obtained from the patients for publication of this case report and any accompanying images. A copy of the written consents is available for review by the Editor-in-Chief of this journal.